Afternoon #warmongers and I've been #paintingwarhammer on some outstanding Tyranid models. Outstanding in the sense they need to be painted, not so much they are 'amazing'. I have these 5 Devgaunts, some made from Hormagaunt 'chassis'. 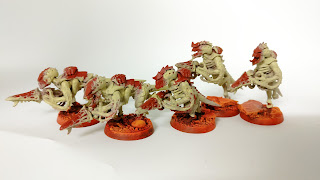 I know this isn't exactly quality content but what I wanted to showcase just how bad my basecoats start off. Coincidentally Marc over at Old School Gaming did a similar post on his Iron Snakes, but I think my Tyranid are in a much worse state initially. 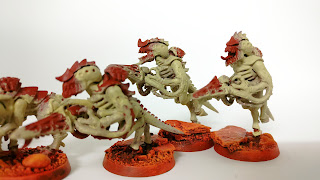 I had undercoated these red, but with hindsight I should have done them Bone colour, like I used to. It's much easier to cut in the red elements. I had started carefully doing the Bonewhite but after one ad a half models completely lost patience and just splashed on a load of paint expecting to pick out the red areas much as I used to do the 'liver' wash that I originally used to do. 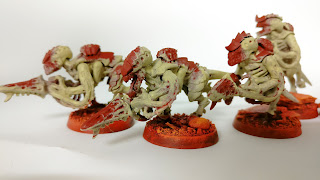 Now if I'd done a Skeleton Bone prime, and then masked off the base and done that Red Oxide, I could have saved myself a bit of effort. Or perhaps, primed red and zenithal bone? 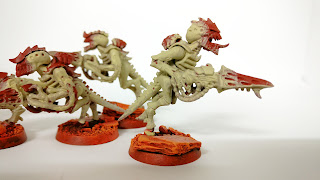 Whilst I was at it I threw on some Bonewhite on the 4 bases of Rippers hanging around. 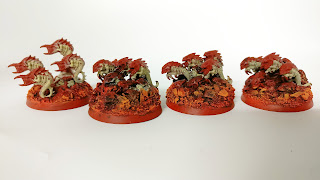 I was a little more cautious on these, mainly to ensure the Red Planet BASE! was retained. All of these Tyranids will keep sitting on the shelf. Every now and again I'll add another step in the painting process until I reach the tipping point whereby a small push would get them done, should a window open up to focus on them. 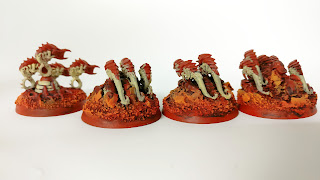 I had these Carnifex heads knocking around for a while so it made sense to get their first basecoat on too. All my nid bits are now ready for Bahama Blue on the chitin, but also cutting in that red for the fleshy parts where necessary. 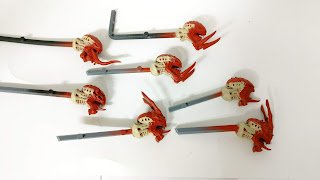 With my Blood Bowl Ogre done and getting through these while I also finish off my Middenheim Marauders turn counters and a few Blood Bowl balls it's about time to take stock of what's on my palette, so expect an update next.
Posted by 40kaddict at 12:19