Afternoon #warmongers and #warhammercommunity I've been #paintingwarhammer on my Acolyte Iconward inbetween a number of other projects.  If I had to use orange I then did the banner, when I did red on something else I did his robes. When I did the yellow on the Adeptus Titanicus guns I did his blasting charges and hazard suit pipes. 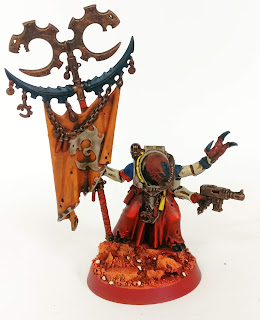 This way he progresses everso slightly and eventually it'll reach critical mass where I can finish him in a night or two. Some of the shading is a bit ropy in places, I think I didn't shake it enough... 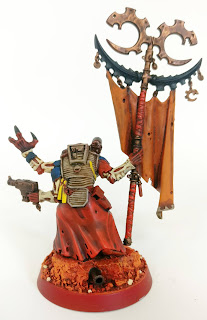 I've done the same with the Familiars, they are almost finished. In fact the only real thing holding them back from completion are the random bits of debris on the bases. Again, an hour or two would box these off completely. 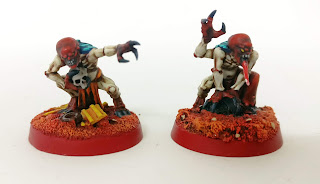 It's a little frustrating that they're so close to completion but I can't just get those last elements done. Perhaps if the Iconward is closer TO DONE I'll feel I can get the three of them over the line together. 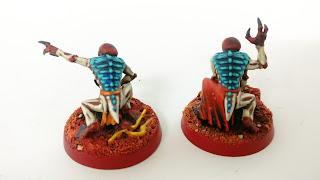 Ultimately I'm going with the flow, so whatever frustrations these create I'm clearly redirecting my attention elsewhere and other things are getting done. It could well be that the high I feel from ticking these off will be better served when I'm not motivated elsewhere. Having a quick win in my pocket might just be the endorphin kick I need if I lose my mojo.
Posted by 40kaddict at 12:25