Afternoon #warmongers and #warhammercommunity I've been continuing #paintingwarhammer Nurgle Blood Bowl team members. I had a play around with the green on this guy, gave him a lime green glaze, which has mad his skintone more interesting but I still need some highlights and mottling on it to be where I want it to be. 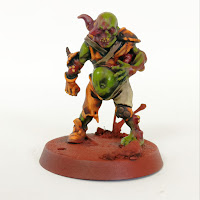 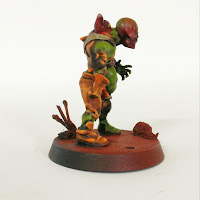 I also highlighted all the orange elements and his red fleshy bits. They came out really well in fact, the highlights have a translucent sheen about them that I'm pleased about. 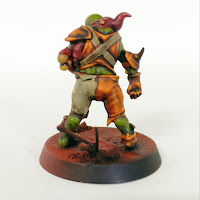 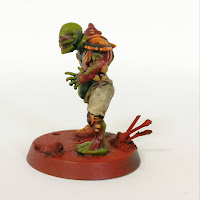 I added a bit more shading and contrast on this guy's fleshy bits. The orange is working really well too. I'm still [stupidly] highlighting the feet, knowing full well they'll be covered in black tar when I do the bases. 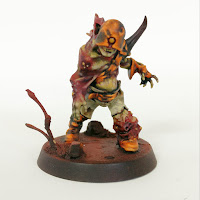 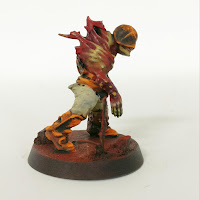 I have noticed that I did more orange on these compared to my test model. The armour edges on the test was more rust brown in places. I might have to address that in later players. 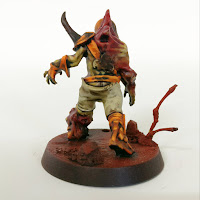 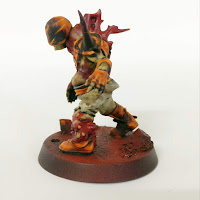 And lets not forget the Pestigor. Again the red bits are fine, but the highlights on the purple skin is nowhere near as light as the test model. I can't quite deiced whether that's OK or not. 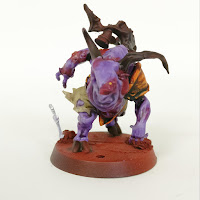 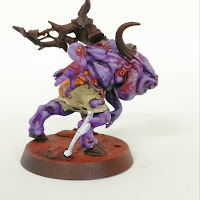 I don't think purple is traditionally considered a Nurgle colour, it fits Slaanesh or Tzeentch more, but I've no problem with using it. I just don't think it's what I had hoped to replicate from the test model. Again, it doesn't have to, I don't mind a wide variety of skintones that started from similar base colours. But experimentation is more useful if it leads to a technique or skill that I can replicate. 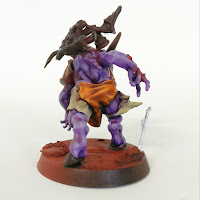 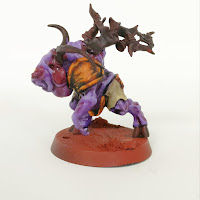 It's all well and good to keep having 'happy accidents' - achieving things I'm pleased with, but if I can't do it again then I'll ended up in situations where I just get frustrated because I haven't locked that technique down and added to my skillset.
Posted by 40kaddict at 12:31