The Army Painter Soft Tone wash [sepia] has been applied. I know a lot of folk decry the current Citadel paint pots for their ability to tip over when using a wash/shade, obviously I found my own solution to that problem. I also found out that some of my washes had decided to go a little funky in their pots. I don't know if they got contaminated in some way but you may recall Devlan Mud and the like used to have a pretty ripe smell sometimes and this is the same recipe. Although the wash looked all milky it went on  fine but I have since resorted to just decanting from the Army Painter dropper bottle into the palette and then using what I need. It does however feel like I've gone through an entire bottle on this, but in reality it's about a third. 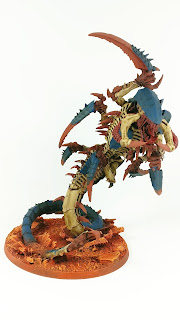 Something else worth noting on this fella is he doesn't ordinarily come with the 'containment spine mandibles' but I had them spare from my unused plastic Trygon Prime parts. It only took a bit of cutting and to pin them in place. They look a little OTT, but because they're at an angle downwards I think they worked out OK in the end. I'm also kicking myself I didn't photograph it pre-wash [although you can just make out some of it on Wednesday's post]. The orignal base coat is always so rough on my Tyranids. As much as the Lord Duncan recommends two thin coats [*CHANTS* "two thin coats"], this was a single rough pass as even without adding the wash and subsequent highlights I want some of the primer to show through the bone to add even more layers of colour. As it was the recesses in the chest area were pure Red Oxide, the Soft Tone wash probably doesn't even need the second Strong Tone wash, that I'd normally do, in these areas 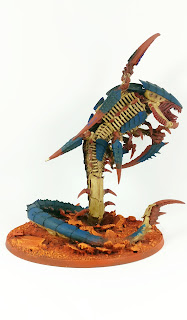 Some of the Chitin plates will definitely need their Strong Tone wash. It's these plates I know will kill me when it comes to their turquoise highlights. It's been so long since I've done them I haven't the sense to be worried, but I've not forgotten. Even though it was one of the first miniatures I painted I still remember the nightmare chore of it's plastic counterpart's tail. This also has a few more ridges and sculpting to contend with, currently without a plan of approach. I'll get there in the end. 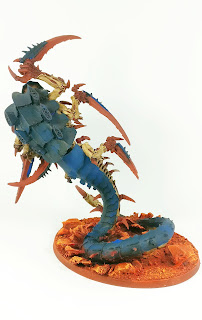 One last pic to show the Strong Tone wash, now for Chitin Highlights. 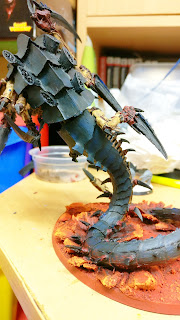