I've been avoiding some of the Chitin highlights on the Trygon, the final largest] carapace plate and it's tail but after painting the Rippers Chitin I had the turquoise out so I at least finished the carapace. 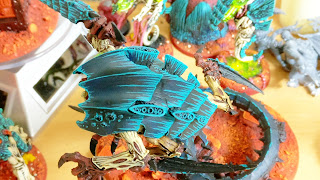 Meanwhile I'd avoided the Chitin by painting the Bonewhite. Mixing up the process so I can't keep track of what I'm doing si both freeing and frustrating. All but four of the talons have had their highlights done but the tail has come across particularly well with the striations far less cartoony than usual.

The head also got highlights and I picked out the flesh bits in Valejo Heavy Red to make them stand out more. 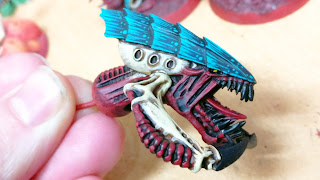 I'm really going to have to do something about that gap I didn't fill between the top of its gum and side of it's mouth! The eyes also got done. They are far from perfect but actually far better than I thought I'd get away with as they are so recessed they're hardly visible at all. Moar Bonewhite next. 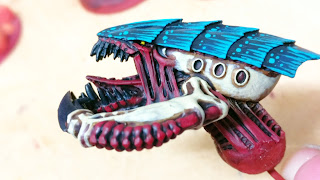 The Broodlord/Patriarch had some 'glow' effect put around the eyes and veins on his head. Unfortunately the glow on the eyeball went wrong so this is after ignoring it for a week and then splodging on some Valejo Dark Green onto the eyeball to cover it up. It has certainly made it a lot better and I can start in again on the eyeball.

Then it's highlight the claws. Can't remember if I've said but the Terminator helmets in the skull pile are either Deathwatch or pre-Deathwing Dark Angels [or Consecrators?], for the history buffs. But I'm not going to indicate which for added mystery.
Posted by 40kaddict at 12:14