With GT3 only a couple of months away it was about time we get some games in so Ben and I faced off. Him with Astra Militarum, a more Leman Russ-centric Cadian force led by Pask. While I was running two Battalion of my Nids so I could access more Command Points and then hopefully make use of all the new Stratagems as well as re-rolls.


The low down:
With a Trygon, Flyrant, 2 Broods of Rippers and 17 Genestealers I forced Ben to keep deploying while I kept them off the battlefield. 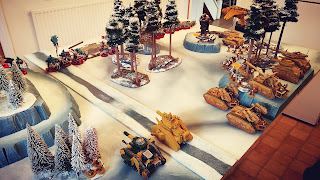 Then with and idea of where everything was I could put what remained down. 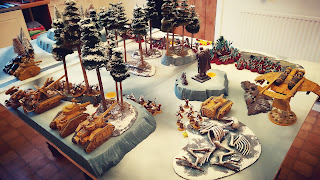 I'm thinking with hindsight I should have made more use of this hill and woods as LoS blocking cover, but I had the Carnifex shrouded in the miasma from the Malanthrope, so I thought I'd be OK. 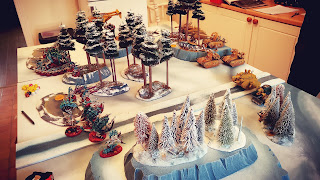 Having seized Ben moved the Vendetta, Hellhound and Guard unit up. He opened fire on the Broodlord and he was brought down to 2 wounds. Shooting continued with the Hive Guard being wiped out and two of the Tyranid Warriors. As my right flank started to disappear I started to re-evaluate my plans. 12 Termagants went on my left flank and suddenly I'm re-evaluating again. There's just no way I can go forward in my turn, I'll have to pull back and just try to hold me objectives with the Tervigon and Carnifexes and hope the soon-come reserves will distract/weather enough fire to keep me in the game. 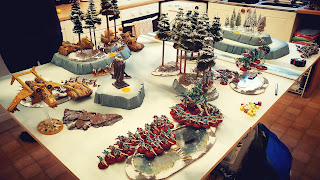 But shooting wasn't over and suddenly my Tervigon is popped, I have all but two Devgaunts left of my big brood and 22[ish] Fleshborer Gaunts left in the mother brood. 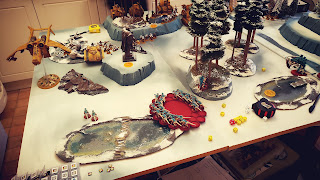 Worse still two out of my three Carnifex are smashed to pieces with all the heavy bombardments. At this stage I just have my head in my hands, Ben had wiped out roughly half my army in one turn, with only 300+pts left on the board. I wasn't even sure what I could do, or if it was at all worthwhile carrying on. I had over 600pts left in reserve so it was worth a shot but it was more an exercise in what was salvageable at this stage. 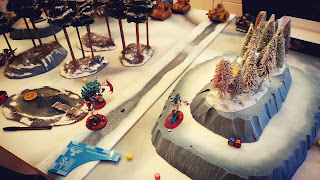 Ultimately I had to play the objectives. Ben had one of them, Linebreaker, First Blood and 2VPs for the Carnifex. If I can hold three of them I might have a chance. So I bring the Stealers and Trygon in on my left flank with the Flyrant. I then huddle the Termagants in the trees for cover, so I can eventually move them back onto the objective in the frozen pond. 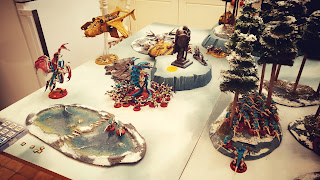 The Broodlord I move behind the hill so he can't be seen and eventually move on the objective the other side of the trees. 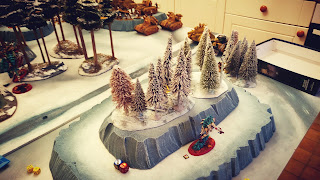 I charge the Hellhound with the Trygon and make it, the Genestealers also pile in to the fight. The Flyrant is equally quick off the mark getting up close with the Vendetta, but having chosen just Devourers he cannot do anything against it, it's shooting had been ineffective and I think I'd only caused one wound on it with Smite, or Psychic Scream :( 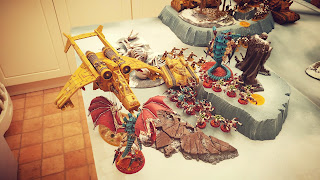 The Trygon was slightly more effective taking most of the wounds off the Hellhound only for it to be torn apart by the Genestealers. I consolidated forward. 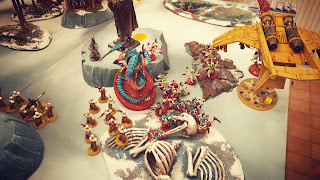 Ben's turn 2 and the Vendetta zooms into my DZ. I no longer have the Malanthrope and Carnifex in shot so it looks like they bought the big one. I think the Flyrant took some wounds too [he may even have been killed] and the Trygon may also have been shot to hell and back [again by it's lack of presence in the final picture]. 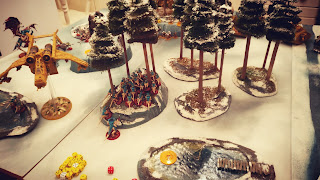 My turn 2 and there's not much I can do. I misjudge how many turns we may have left before the game has to finish [we were playing in the afternoon but I had to be home by 6:30 to take my wife to her Christmas works do]. So I don't put anything on the objectives, including the Rippers. I threw all I could at the Vendetta, burning through CPs. I give the Termagants Scorch Bugs and Pathogenic Slime and shoot at the Vendetta, taking off 6 wounds, then I use Single-Minded Annihilation to shoot again, and my 22 shots are appalling. Another three failed saves, 6 wounds and adding the single Smite damage I caused in my first turn it's still there on 1 wound :(  To make matters worse Ben is back on 7 Command Points thanks to his Kurov's Aquila Relic dice roll regaining CPs when I use a Stratagem. 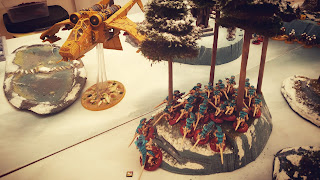 My Genestealers multi-charge the two guard units. Only 8 Stealers survive the charge and I split the attacks evenly, using Scything Talons on one squad, killing 5 and then switch to Rending Claws for the other squad killing only 3 [purely out of interest in what would be more effective, although I think I already knew the outcome]. Neither of the squads fail their morale. I'd hoped to break them and them consolidate on the objective, I could potentially have secured all 4 if I'd planned and executed it properly. 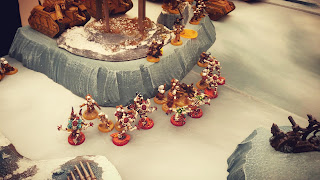 We called it at this stage, there was no time left and I would be annihilated anyway next turn. A proper timed game I might have put everything I had on the three objectives but Ben had one, Line Breaker, First Blood, Slay the Warlord and 4 Big Guns VPs so he had 10VPs altogether. He also said he would have put a Leman Russ on the objective on the hill by the Broodlord if he'd known it was the last turn, but it's all moot.


Ben came to the conclusion he should abdicate first turn in future, to give me [Liam and Otty] a fighting chance but I'm not convinced taking such a handicap does us any favours. I had thought the cover I had would be more useful but if I'm not in it everything can shoot through the trees with impunity. As Line of Sight Blocking terrain is in short supply I think a fairer approach may be to treat each tree base a LoS blocking.

At GT3 there will be LoS blocking so we need to practice accordingly, game wise it's far less an artificial balancing act, even if the concept appears that way. I'm sure we'll discuss at some point but it's difficult for me to make a judgement on my list given the result...

If you're interested in any more of my Battle Reports, point your cogitators here: www.40kaddict.uk/p/battle-reports.html
Posted by 40kaddict at 12:18