That little matter of varnishing

My Realm of Battle board has been languishing in the garage for a couple of months now. Although I repaired the damage wrought by the Polyvine varnish I had not finished adding shading and painted the skulls. More alarmingly the garage is where we keep the tumble dryer so it's been regularly exposed to warm, moist, fabric dust! I've covered it up but I'm well aware I'm not doing any favours to its future prospects. So I need to tackly the varnish issue. To that end I prepared this 6" strip of MDF and painted it up. 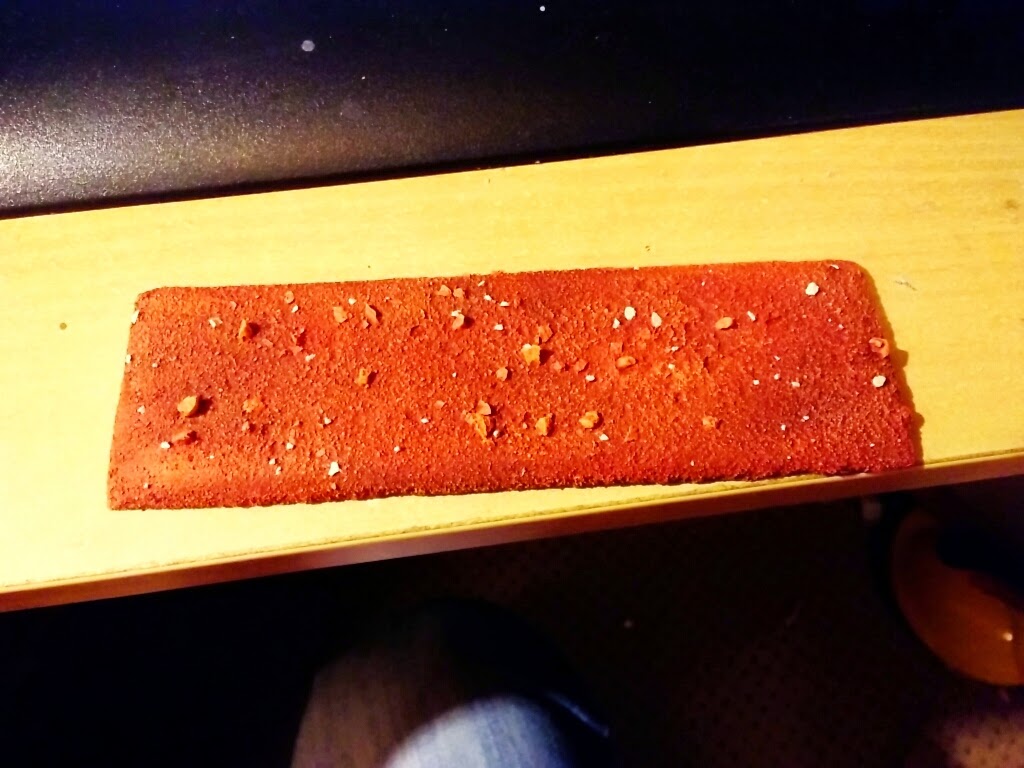 As you can see it follows my standard Red Planet Basing and I can test out a suitable varnish instead of doing it on the boards and ruining it and having to start again. Although the grain is more pronounced than my boards I'm confident that if I can seal this neatly it'll be more than OK for the smoother RoB board. 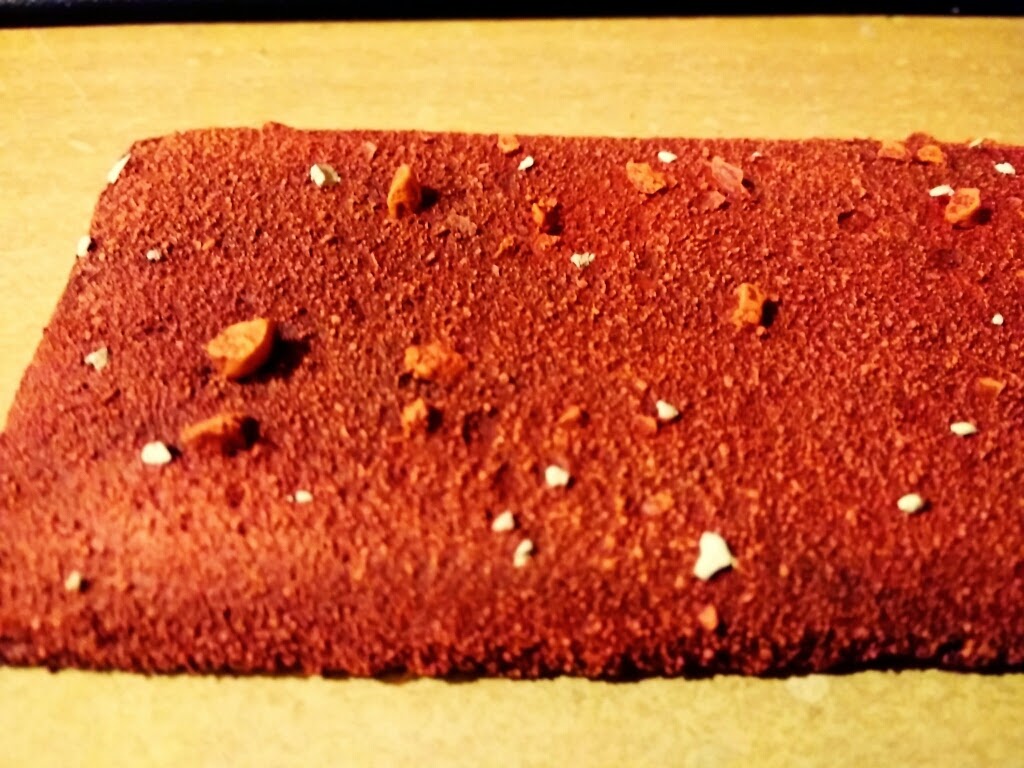 However, the milky/creamy consistency was worrying and there is a mention of it leaving a white finish on the tin which brings us back to Polyvine territory. 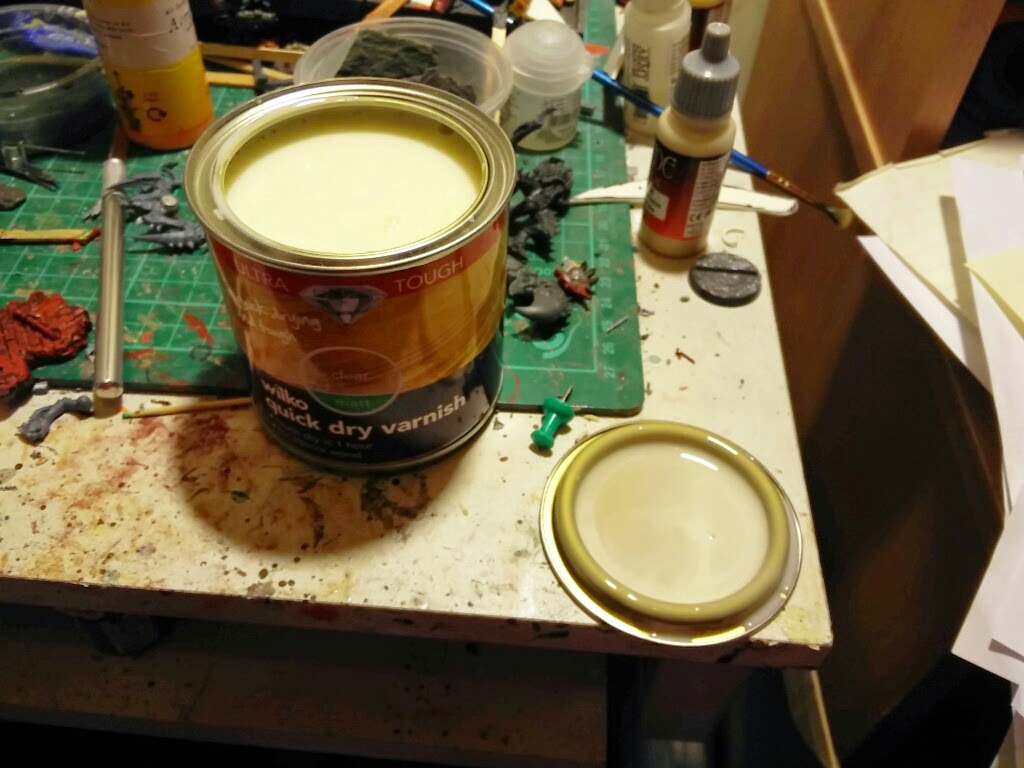 So I applied the varnish, foolishly to two thirds of the piece instead of half and I think you can see it's not acceptable. Granted this was still wet but the varnish managed to 'rehydrate' [not sure if that's the correct term] the top layer of the craft acrylic and mix with the varnish. This meant the varnish took on a slight orange tint and together with it's thickness has obscured much of the deepest shaded recesses. 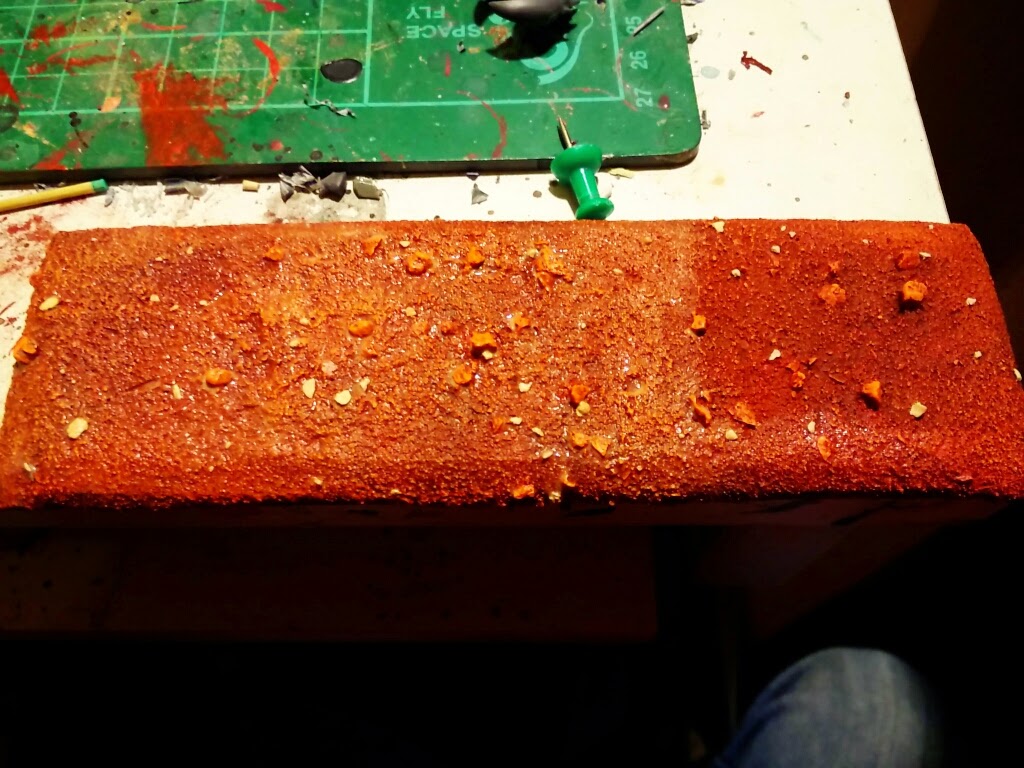 I was going to be much happier with a brush on varnish but at this stage I'm contemplating a spray lacquer, of course I now only have a small amount of my test strip to try it out on. The question is which brand do I go for. There are some cheap clear varnish sprays available and I know 'cheap' should have alarm bells ringing but I recently saw some forum posts saying they were very good. I've actually even got some from a purchase at a £1 shop a while back. 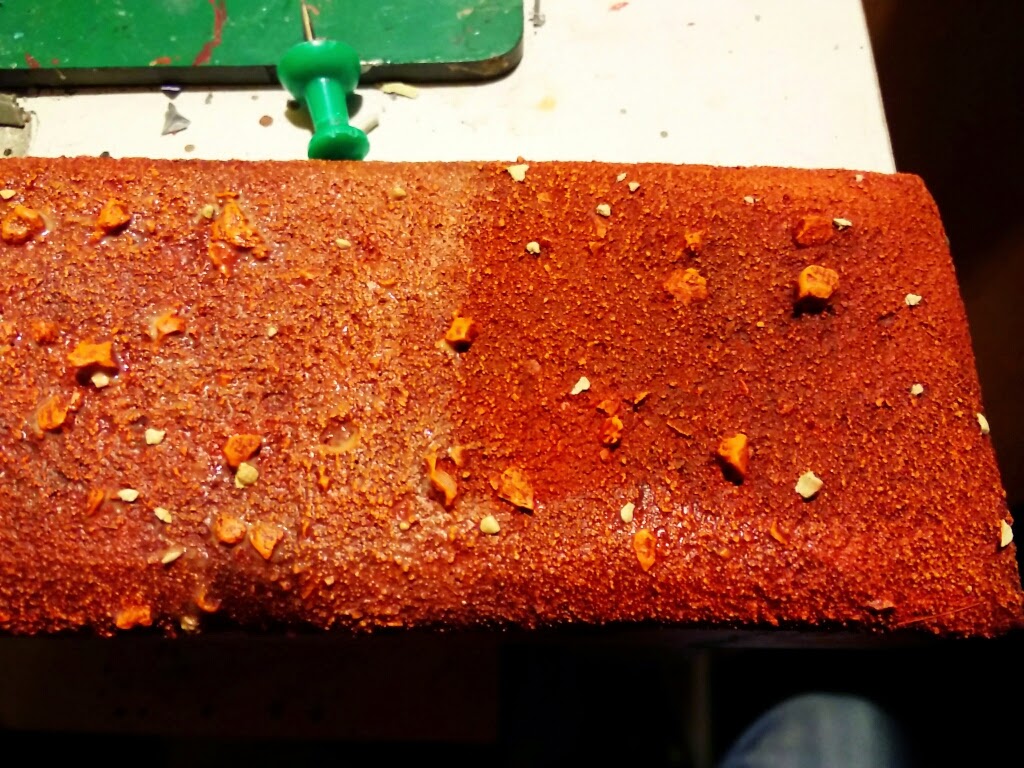 I wont' be touching Purity Seal but there is Plastikote and there is even a supply of Rustoleum, which usually is only available in America. 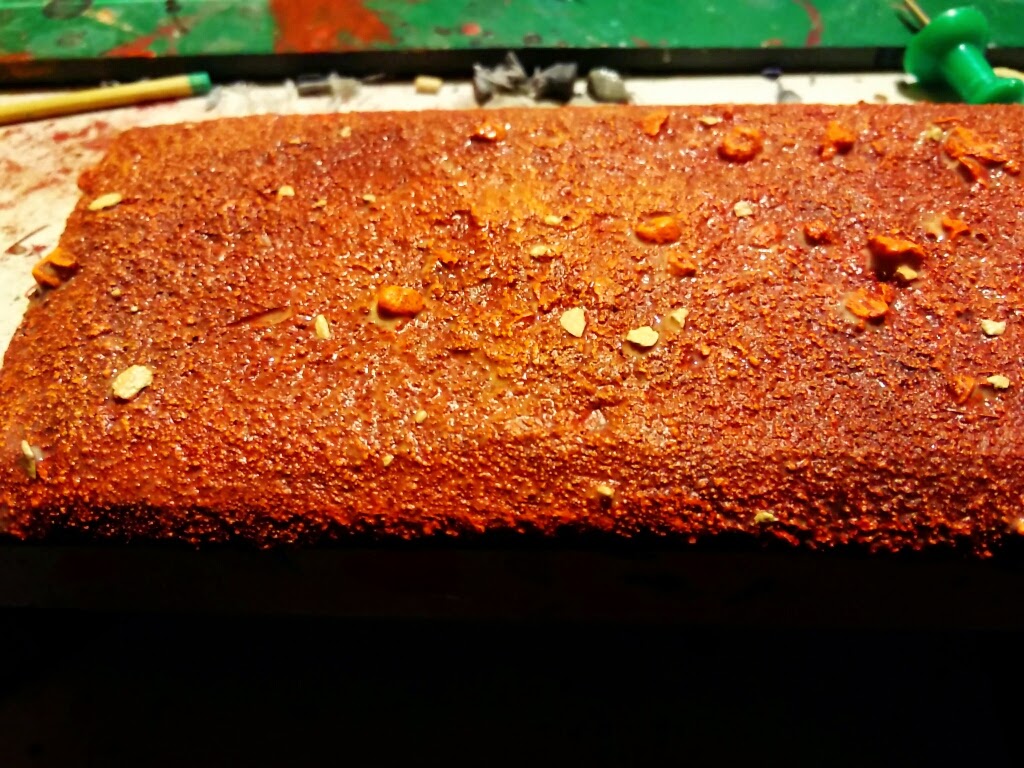 I'll hopefully pick up a Plastikote, test it and my £1 shop version if the results don't stand up I'll have to accept this isn't going to be sealed. Meanwhile I might make another test piece just in case!

* Update, this is the reason I believe I need to varnish the boards: 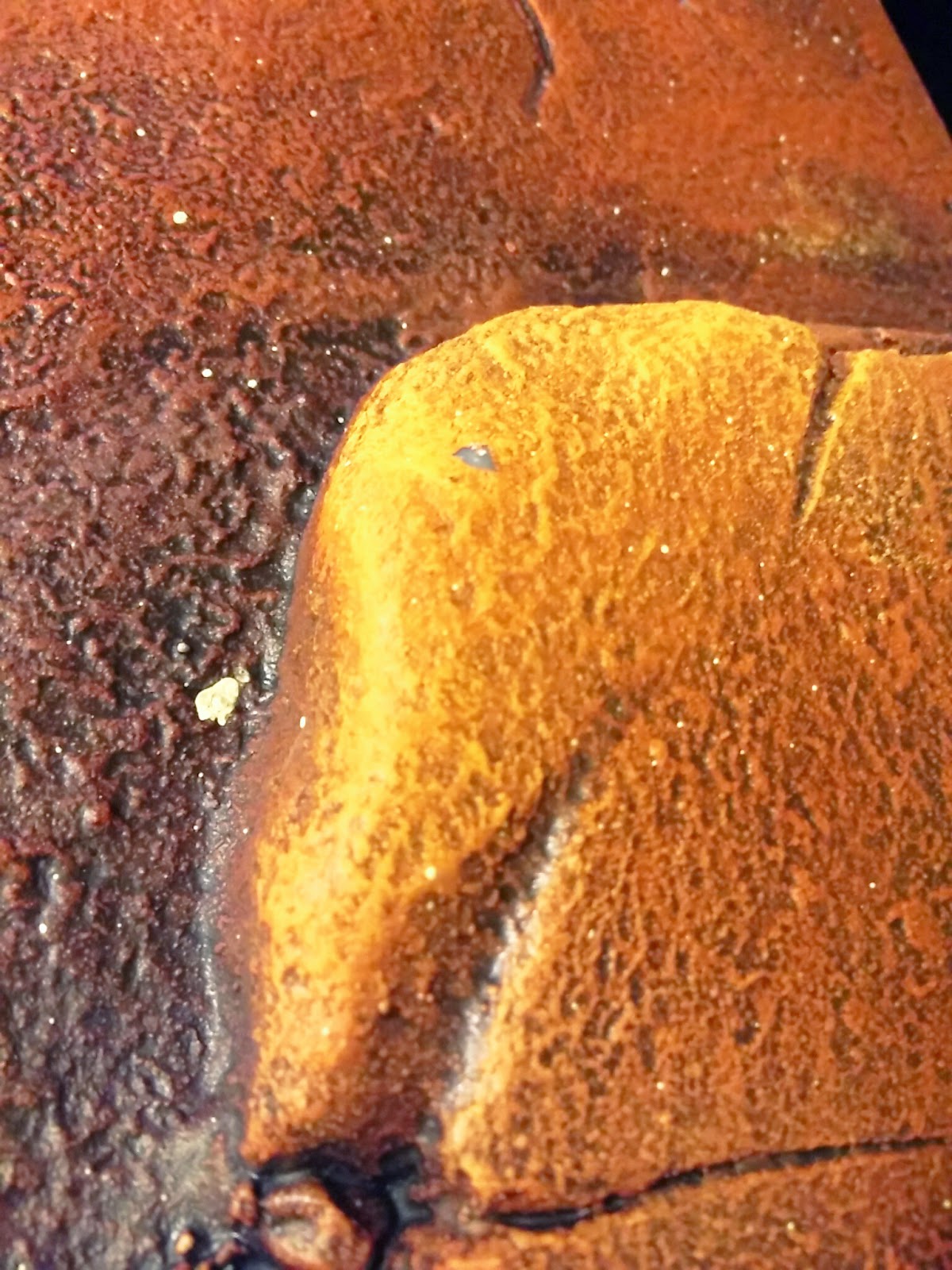 These are just two of the five or six paint chips I discoverd on my Realm of Battle board which hasn't even been used for gaming! It's been sat in the garage, covered in bubble wrap for a weeks 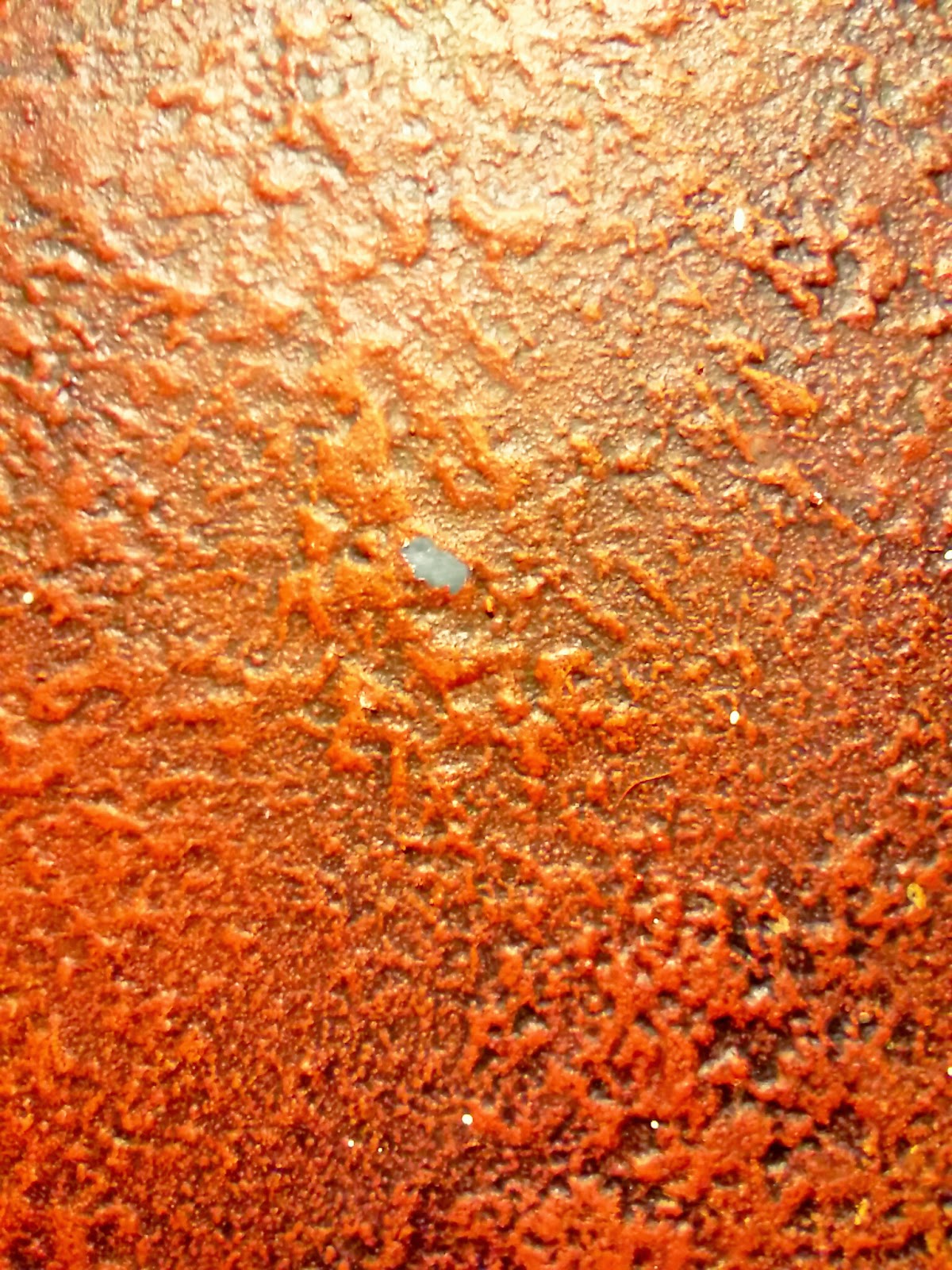 I may have caught them bringing them into the house but that questions the durability of the paint a great deal. Anyway, I've got a Matt Plastikote Varnish Spray so I'll give it a go, on the test piece first.
Posted by 40kaddict at 12:09

Email ThisBlogThis!Share to TwitterShare to FacebookShare to Pinterest
Labels: Realm of Battle Board, terrain