"Has anyone got wood? I need wood!"

Although my eldest son may have abandoned all 40k pretencions we do enjoy watching the always entertaining Wil Wheaton on tabletop and in so doing he has started to show an interest in other games. We recently went into a Waterstones book store and noticed they stocked a range of board games and I think the fact you were buying them from a book shop and not a 'hobby store' changed his view on them. We weren't sure which one to get and to be honest hadn't watched the original Catan on Tabletop, just the Star Trek version [mmm 7 of 9!]. Anyway, we went back again and I had a Waterstones voucher that had been burning a hole in my wallet for a year now but I was desperate for the Scarfolk book which I found and it was half price and amazingly it was a £20 voucher not £10 so I cajoled him a little bit into getting it with his recent birthday money [he had enough to practically buy my car for what I paid for it as a repaired insurance right off] and I contributed the remainder so now we have this. 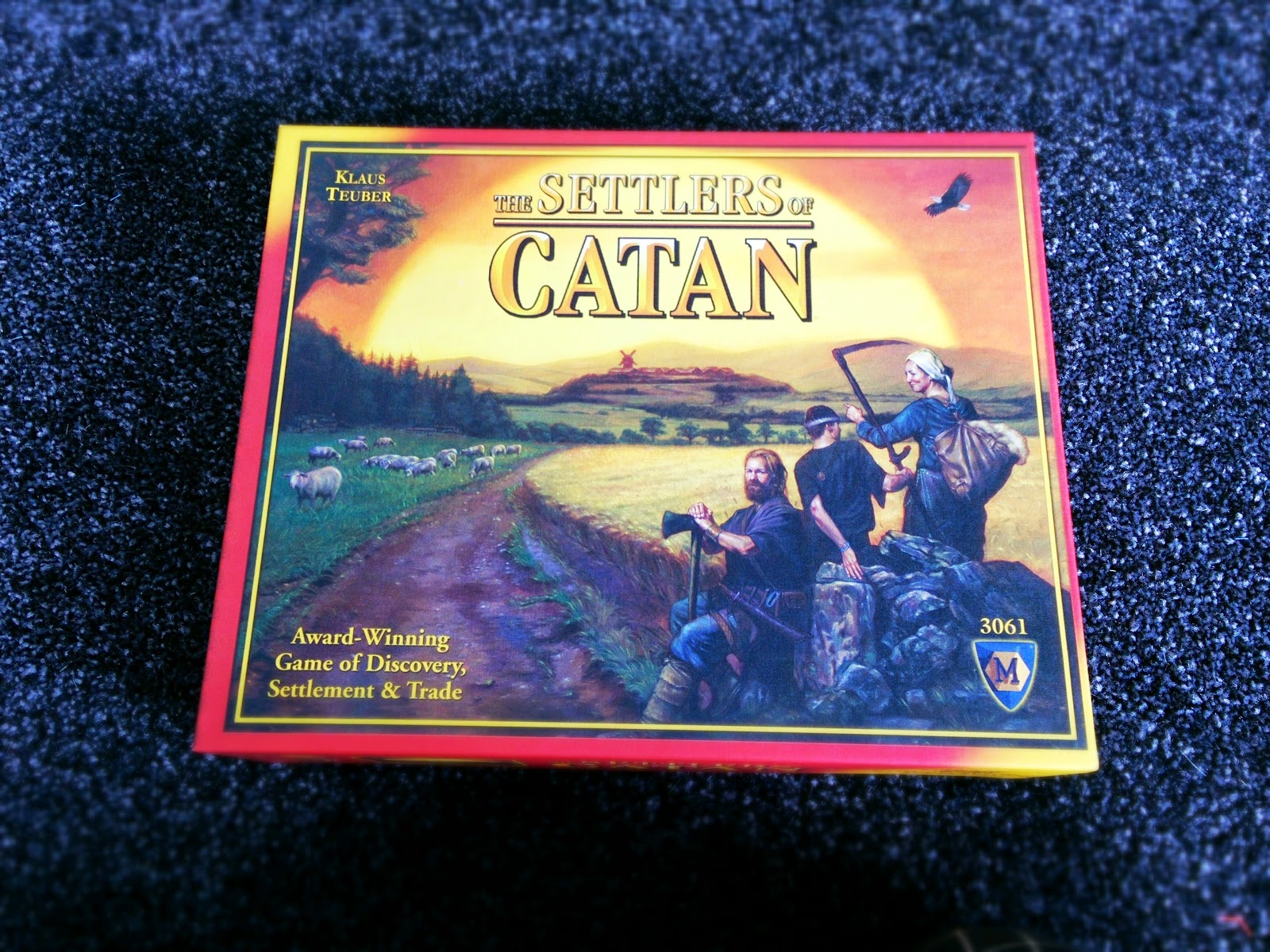 As a family our gaming habits are usually the Sherlock addition of Cluedo [Clue for the American readers], Game of Life or Pop & hop [generic Frustration]. So despite the excitement I really had doubts this would ever get played but somehow the second night we had a go. I was the white, my eldest orange and my wife and youngest formed a coalition team to begin with in the blue. We stumbled through the rules and by the time we called a halt due to impending bed times I was in the lead things to an aggressive road building strategy. 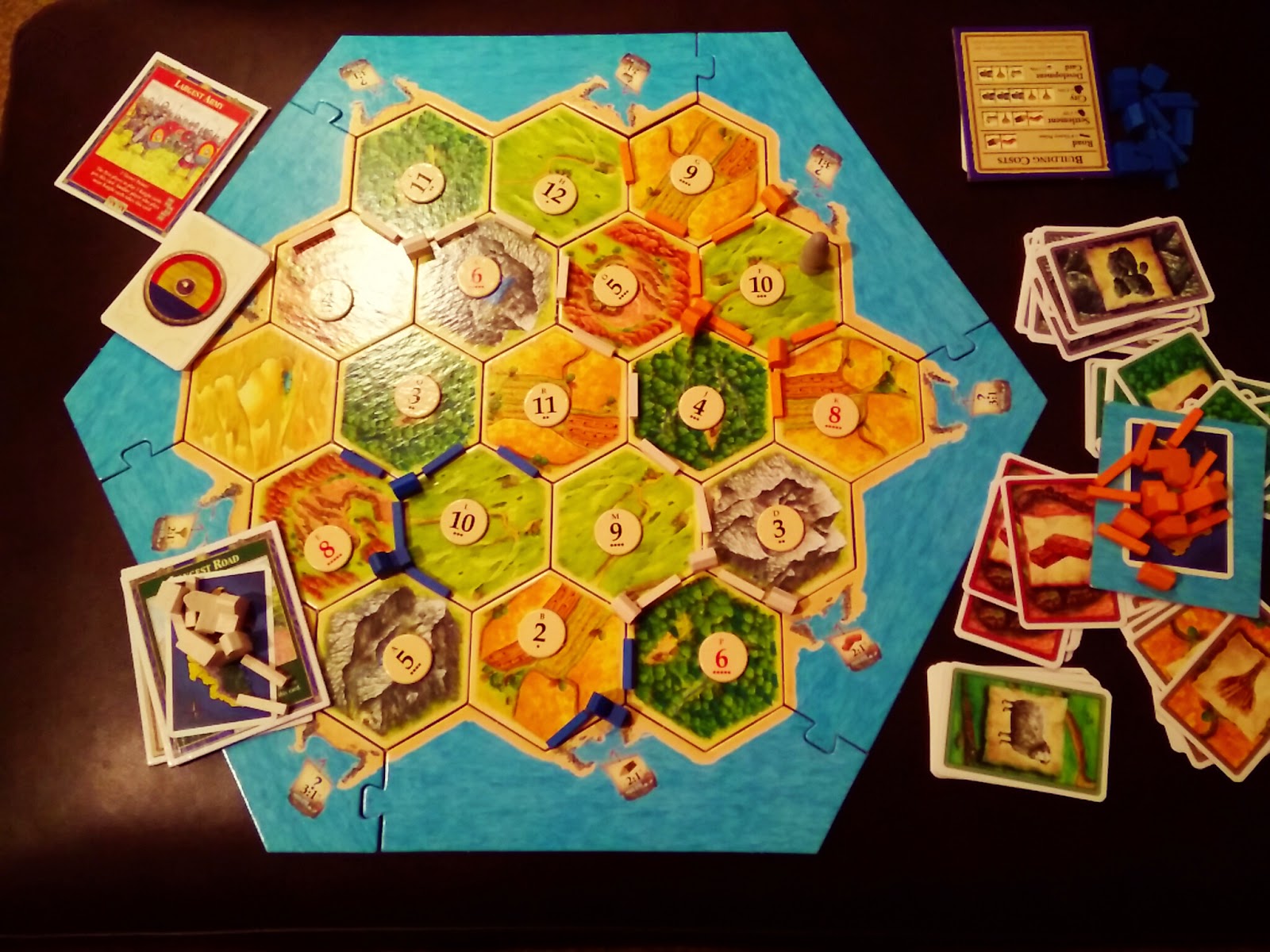 A couple of nights later we attempted to pick up where we left off, it was handy that I took a picture just in case the board got knocked but we didn't take into account the youngest deciding to 'tidy the board' and so doing redistributed all our specific resource cards back into their respective piles. There was obviously recrimination, tears, frustration an attempt to soothe things over [we really don't play well together, fingers crossed this will help rectify that issue] and ultimately we were back on track. We had a lot of fun and with a sportsmanlike suggestion to my wife if she continued her road north from tile 10 instead of encircling it she could attempt to build more than then 10 road links as she would be on 9. She then managed to use up all her road pieces before me and snatch the 2 VPs from my grasp. The eldest also managed to play the most knights and I couldn't catch up. The end result was the blue coalition winning with the eldest on 9 and me trailing on 8. If the wife had failed to build her last settlement my son would have won and I'd have still been short of developing a Palace to secure 9VPs 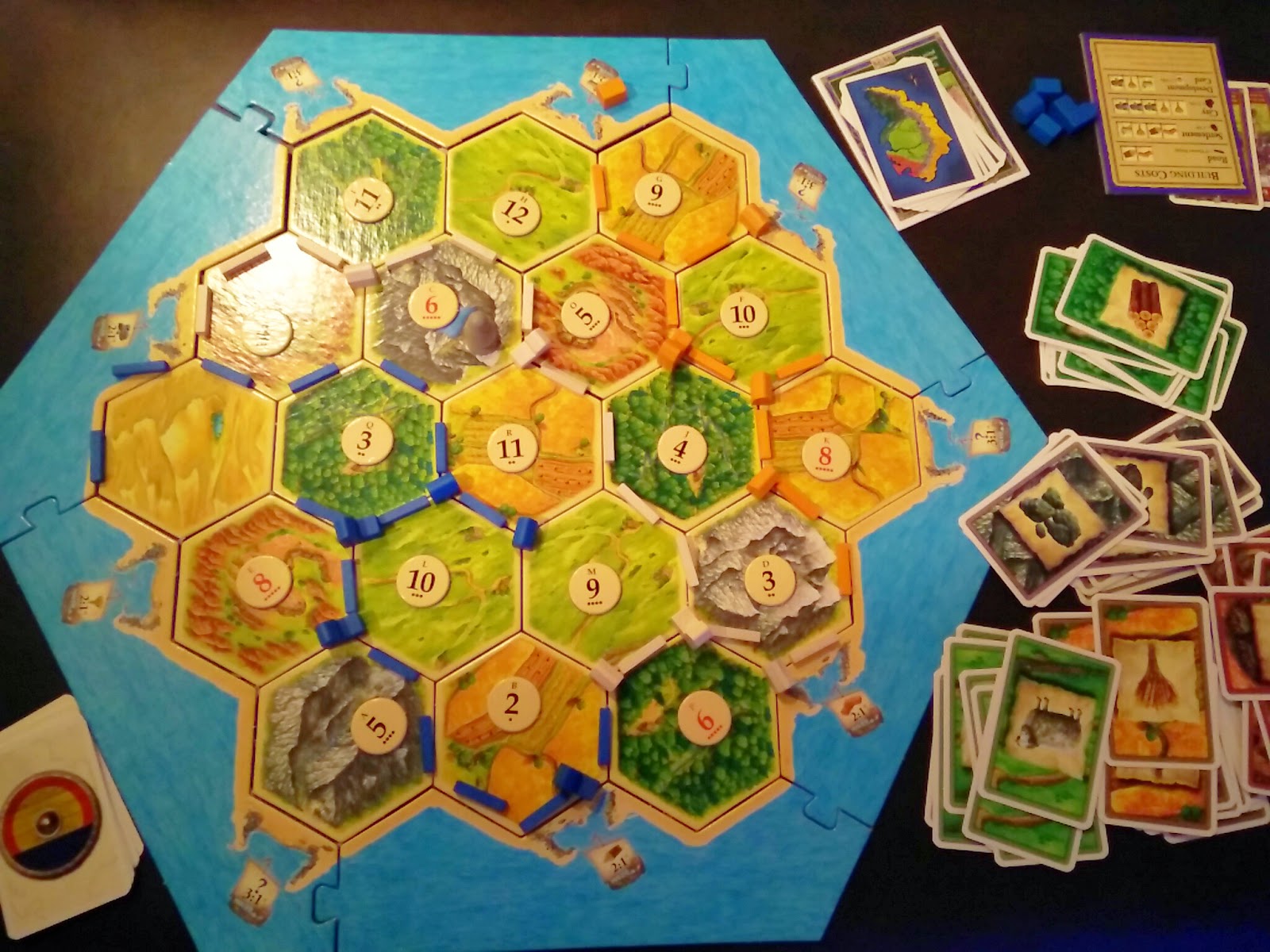 Aside from the board hijinks, a misunderstanding with maritime trade and a last minute confusion regarding a burgling spree by the robber this was so much fun. I really hope this becomes a regular event. We think the youngest gets the gist so even if the wife decides not to play the boys and I could still give it a shot. A few more games under our belt and this will definitely be worth it, even if it's not 40k related. However it's been surprising how many people have commented on it on my Facebook timeline. I know it's treated as a 'modern classic' but I didn't realise so many people would be aware of it, but there you go!
Posted by 40kaddict at 12:07