Despite my Son's on/off passion for 40k he does have some very particular feelings about it. He's often coming up with new 'rules' and ideas for the game. Clearly ones that make any kind of balance laughable but then aren't we already at that point? One thing in particular he's opinionated about was how he wanted to paint his Swooping Hawks and his Striking Scorpions too. He wants his Swooping Hawks to be the same colours as Golden Eagles, or remeniscent of them. So I've gone about Red Oxide priming them and we've used Iyanden Darksun on the wings and 'beaks', he then decided the shoulder pads could do with a coat of yellow too, fair enuff! 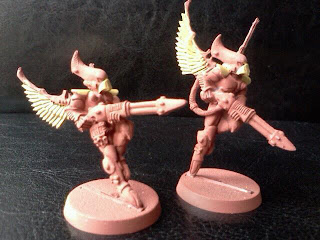 Next step will be to pick out details and areas that will be metallic for painting initially black. Once that's all done we'll do a Gryphonne Sepia and Devlan Mud wash to try and make them a bit more brown and obviously bring out all the shadowed areas 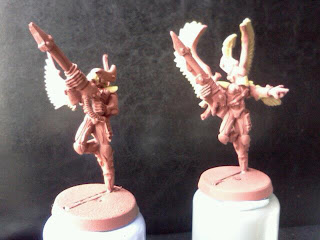 Hopefully we'll then be able to add in some highlights on the armour plate bits, bring the level of finish up a bit from the Guardians hes done which are just basecoat and wash, it's the next step for him. Frutratingly I'd hoped he would have done more than this in the hour and a bit I was out visiting my Aunt one Sunday. Two of the Hawks had their wings and beak done already so he only had﻿ to do 4 including the Exarch. 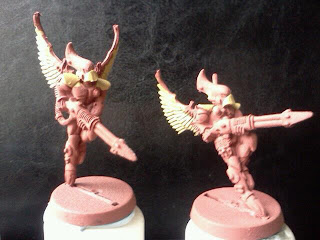 Perhaps the issue is I'm now 'involved' again in his painting so he doesn't feel confident enough to continue on his own. It seems I can't win in this situation and pretty much every night he's clamped to the PC playing some 3D virtual world game where everyone looks like a Lego person. 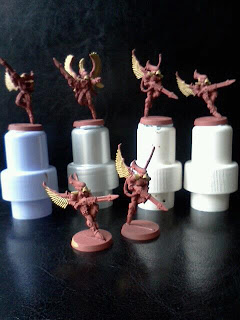 Anyway, if he doesn't get them done it'll be 'nids in June! 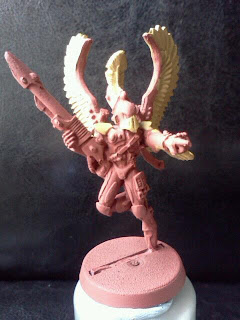