As you may recall the other weekend it was 40k's Birthday and local GW's had a number of offers on including these fine items that I secured: a 25th Birthday Mousemat 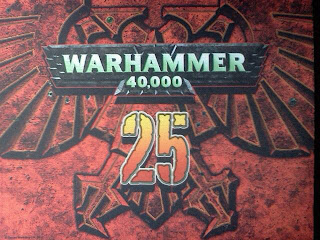 And a 25th Birthday Pin badge. 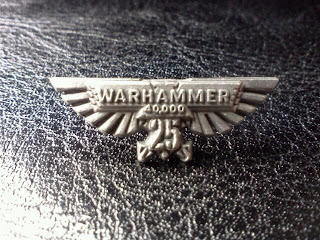 I also got an A3 Rogue Trader poster which I'll find a picture frame for, eventually. The day was not without controversy though. The manager had informed me previously of a local GW tournament that would be held at the 'GW Mecca' Warhammer World in June, a £15 ticket with £20 coach. That sounded good to me with the only downside that there would be only 20 tickets. At some point it was suggested I might like to take my son, which I wasn't 100% sure on, suddenly my cheap trip to the Mecca doubled in price. I was looking at possibly driving, which would have taken a third of travelling even with today's silly petrol prices. Anyway, it turned out on the day only 15 tickets were available, and presumably the reduced head count meant the coach had to be split between fewer people and that meant £27! I 'ummed' and 'ahhed' and just bought my own ticket with a view to speaking to the wife about whether it really was worth taking the nipper.
OK, I'm tight fisted but I maintain there';s a big difference between £30 in tickets and £30 in petrol and £84 all in, but she still made me feel like a 'heel'. So I got him a ticket and it means he should be painting 1,000  pts of Eldar to compete with, however much like the fallback cars in Top Gear I will be preparing a 1,000 pt Tyranid army too. I may also attempt to finish 1,000 pts of Dark Angels as well but with another 'nid force in reserve. Personally I don't hold out much chance for either of us but thankfully the 'nids are there just in case.

Incidentally, for MY birthday I got this from good friend Pete through Steam: 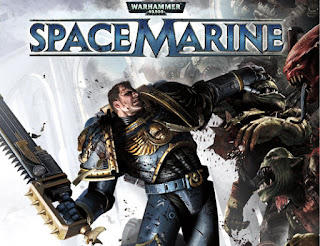 I needed to get a Graphics Card upgrade anyway to play Dawn of War 2 so this was just the incentive to do that with some birthday money, not to mention another ten Devgaunts and a second Broodlord. So expect some new distractions just when I need to concentrate on getting figures painted and I haven't even mentioned the two BloodBowl teams...
Posted by 40kaddict at 12:54