That has to be the worst blog title pun ever so lets move on... a little under a year ago I ventured into the scary world of a pay monthly phone contract, well scary for me that is. Prior to this I'd been quite happy with your standard Pay as You Go mullarky and had slowly progressed from a Phillips C12, to a SonyEricsson T16 [2nd hand] to my wife's SonyEricsson w810i but I was averaging around £10 every six weeks.

The world of phones is very different now and although I'd never had a data account or used a smartphone I'd had a Palm Zire, Tungsten T [which was awesome] and a Windows Mobile Acer 300 PDA so I knew I wanted a phone with the same capabilities, built in Sat-Nav and by this stage MP3 capabilities were standard. I'd been looking for a few years for a decent upgrade but I also needed one that was going to be on a monthly tariff I could afford/justify.

Cut to last April and I ended up with an LG Optimus One: 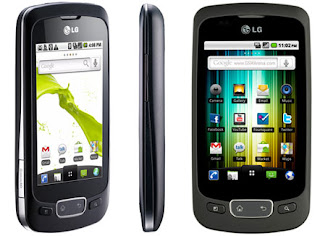 It was a great deal, more minutes than I would use, 100 texts a month that were upgraded to unlimited for free, 500mb of data, the phone was free and it even came with a car cradle and sat-nav kit, all for £10.42 a month! Some may claim it's not the prettiest of phones that the HTC Wildfire was a better phone [it retains it's value better on trade in, but the LG is better in nearly every other spec aside from camera quality]. Regardless, I love it. I've always been an Apple fan but I didn't want an iPhone and Android syncs so well with all my Google things, it's almost like they were made by the same company ;) That can't be true, Google operates a firre and forget policy of distributing all sorts of cool things and never bothering to fix them, make them better following user feedback - I've been waiting for years to see my google map ratings and reviews reinstated.
But you can do cool stuff with the phone and you can download apps too and a few are 40k related. So having intoduced you to my phone in case I can make an irregular feature out of this here's an app you may like: Templar Assault. I think when you go to the link you may see the inspiration, it's definitely not Space-Hulk GW legal. I've had a little go of it and it's quite fun, you get to upgrade your squad with different weapons and equipment and for free it isn't half bad, here's some screen shots: 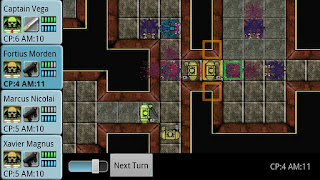 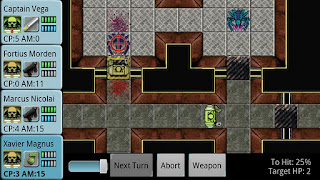