Terrain is everything - Dawn of War Plasma Generator part 4.

I think things are going to get a little messy/confused over the next few posts, so please bare with me. With the Plasma Generator, modular plug and second man-made hill progressing there will be a bit of overlap, separation and repetition in the pics. It's all good though.

Below we've finally got a bit of undercoat on the Plasma Generator. I tried to keep it thinner than usual to see if the folder card texture would show through, we'll see in time when the first bit of real colour goes on. 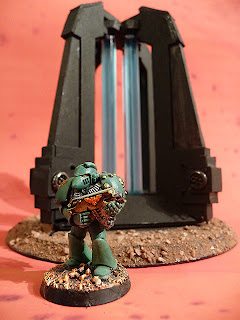 As you can see the plasma tubes seem a little pale, this may be the array of new electricity sucking Halogen bulbs we have in the kitchen. Sure the pics are not as murky as on my phone but we seem to have lost the brightness of the real Ferron Proxima which I think explains the slightly insipid gel colour.﻿ 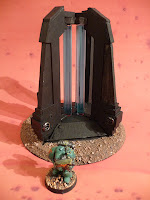 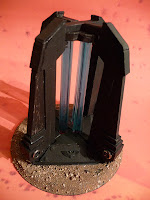 And here we have the generator mounted in the man-made hill modular socket. For those who plan to make this baby with LEDs this could be your solution. Plenty of room to hide gubbins in this little base.
Now I can't recall if this was the Athena Plateau or the Mercury Plateau, There was very specific fluff why I chose to name the two other man-made hills that will accompany the Vulcan Plateau this way. Typically I didn't write down the blog post explaining these reasons at the time and I've since forgot the reasoning but there'll be an update on the man-made hill soon. 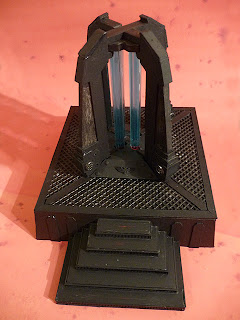 Last up the two tier foamcard has been covered. The template will be vague here. As you can see the diagonal cuts for the upright pieces had to be widened at the ends to accommodate the reinforcement on the uprights. This was quite difficult to measure for the trapezium, and it turned out they were all different sizes. So I'll put in a max size trapezoid and you'll just have to trim it down. I'd also used the jewels from some small jewel brads in the corners, they were just too big though and I cut them off, with some PVA residue left in place but that could me some metal corrosion. I replaced them with smaller rivets from card 'chads' made with my late Grandfather's ancient hole punch, it's still so handy. 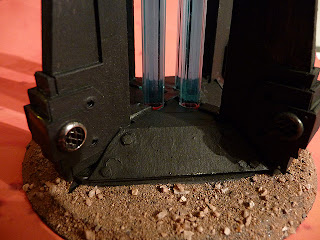 ﻿More filler, less killer in my next update me-thinks
Posted by 40kaddict at 12:31