Terrain is everything - Dawn of War Plasma Generator part 7.

Have I screwed this up? No, well I don't think so. I think the weathering is great and aside from the lack of green [due to Ferron Proxima fluff] I think I've done a passable version of the rusty yellow I see at Appley Bridge Station, which of course was the challenge. However, I feel it's too pale in places. The age old problem with that colour. I kind of miss the Iyanden Darksun, but then I also like weathering, so which is best? There's only one way to find out - FIGHT! For those who don't know Harry Hill I suspect that's lost on you, nevermind. 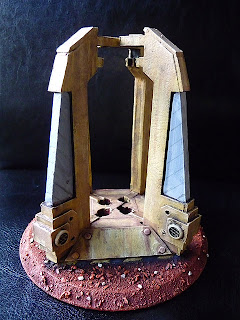 Additionally, the choice of white and [soon-to-be] black chevrons feels like a mistake. The shaded red oxide previously was quite a contrast and perhapse worked better. Still the Aquila has come out well thanks to the weathering.﻿ 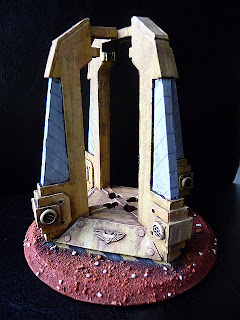 I think perhaps the drybrushing enhances the defects in construction here... at the top 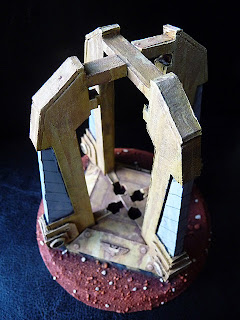 and here... at the bottom, but perhaps because there is more grimes/rust applied I think it's more forgiving to the shoddy masking tape. So for what I have lost i think I've also gained - equilibrium? 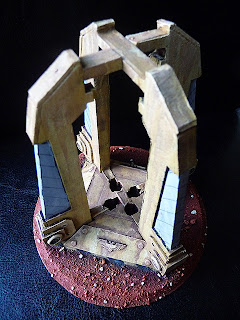 Not sure why I have these two nearly identical pics but theres a slight change in lighting that might enhance some detail in construction if you're that anally taking notes. However, the big issue might be that when I come to add the plasma tubes do I make an effort to add a glow effect on this base and on the inside edges of the uprights? Would it be an effect too far? I'm already trying to justify the weathering, will it confuse/detract/ruin the current state. Is it better to just leave it alone and make do - here lies the stumbling block that could stall this project altogether! 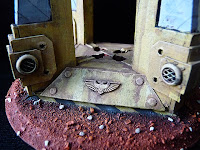 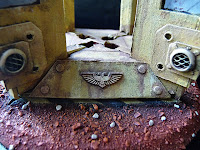 Now, at least in this pic you can just make out that the textured folder card is slightly visible in the top right. Not so sure about that bit of masking tape edge though :( It's a choice between capping the entire edge including reinforcement, that looks neat on the edge but scruffy on the side or the alternative, just visible on the right background upright - caping just the foamboard so you're left with a slightly shoddy looking edge but clean finished sides. 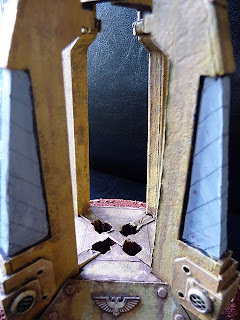