Terrain is everything - Dawn of War Plasma Generator part 6.

Iyanden Darksun for the yellow! G.O.D. I love stippling, it really allows other paint to show through and adds texture as well areas of more/less opacity. 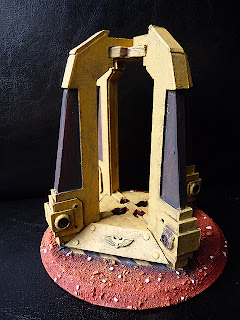 I'm thinking I could have added a couple of Imperial Fists symbols on the two plain sides, as they came with my drop-pod, but I suppose it's a bit late now. I think this is the point where you clearly see those joints, edge covering that work and those that don't. I think the biggest area of concern is not in fact the laminate reinforcements which could be explained as seperate pieces welded on [as in fact they are in real life] but some of the shoddy masking tape work on the four upright pieces that lead into the plasma tube holes. However, as exciting and keen as I am on this project as I near the end of it I can feel my enthusiasm wane. It's always the way and as far as I can tell equally common among other hobbyists 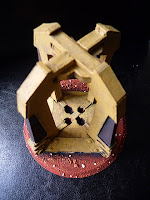 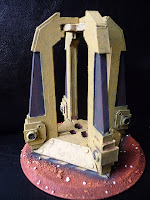 Here's where the stippling looks coolest, but what will remain after I put my next lot of weathering effects in place? 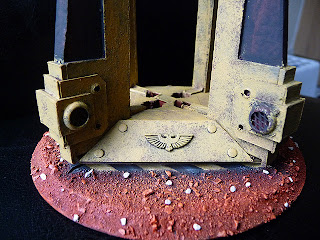