For some silly reason we ran the Prime at the Librarian squad and because he doesn't have fleet wasn't able to assault them. Stupid really, he only got 3" and didn't need them to make the assault but we abided the decision just because it was a valuable lesson. Thankfully we didn't need him as the Termagants managed to Poison the remaining Blood Angels and win the day, but non of the objectives. 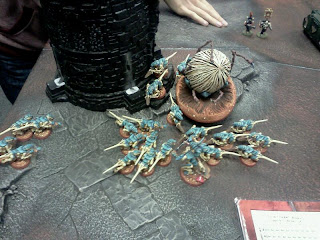 Over on the other side, the Broodlord was squished, I think one weapon had been destroyed on the dread but it moved off in search of the Trygon. Nothing much happened apart from a few more of the other Blood Angels from the Rhino being picked off, though by warrior fire or Necron gauss I don't recall. 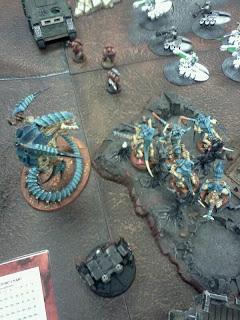 So my thoughts? We had a lot of fun. The last Apocalypse battle we went to was very hectic and the age range was significantly lower which made things more like herding cats. This time there was a lot of experience, maybe too much because we were often bemused by what was going on. Our little corner was pretty much self-contained. But, with so many taking part it was also a bit frustrating to suddenly have swathes of figures wiped off the board without much chance to use them or retaliate. For the most part we faced a squad of five marines, with a Librarian and they pretty much squashed the entire 'nid force flat! Maybe this is how most current games play, perhaps we're still not experienced enough about this to expect that the army you spent hours compiling doesn't get to do half the things you plan on it doing, I don't know. Maybe it's a peculiarity of Apocalypse, again I don't know. Don't get me wrong, it's not sour grapes. Neither my son nor I care whether we win or lose - there's nothing more fun than a spectacular loss but somehow we didn't even get that out of the poor Hormogaunts for instance. And deep-striking was pointless as we only had a couple of turns each and the wee-little Rippers never even got to gnash their teeth.

Saying that though we did have a lot of figures left and in another turn I think the Trygon would have squashed the dread, the Termagants could have captured the objectives and the Warriors would have mopped up anything else knocking about so we were well placed for further battle. Overall we enjoyed ourselves immensely and everyone was super nice and made us feel welcome but I was reminded of how much more fun it is to have a proper 'crew', a group of friends you can banter with and really enjoy the games. I may have some more to say on this in a future post, as a wise-man once said "things are afoot at the Circle K"
Posted by 40kaddict at 12:38