Here's one of my Wizards, an Empire Wizard of Light. If I recall he was free on the cover of White Dwarf. Obviously I continued on the Egyptian theme with some Pharoahic type colouring on his head-dress. The Magic rules at the time had the wizard be more powerful if he had a pyramid of acolytes behind him in formation to help channel the mystical energies. I didn't have any appropriate figures but I did have a number of my brothers Ninja's so I painted them up but haven't taken those pictures just yet. 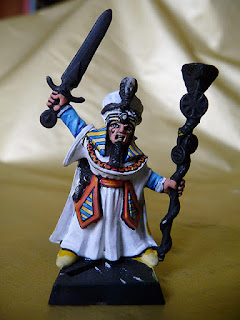 Here's the rear view with the sunburst on his cloak and a massive air pocket in the middle of it! 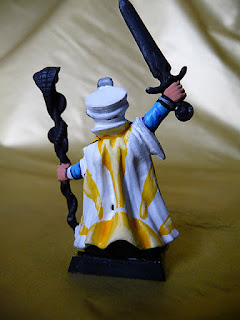