Once again my evening photos leave a lot to be desired but waiting for daylight is the difference between having content or not. Anyhoo, here's my AoBR Dreadnought. So far it's an undercoat, Boltgun Silver and a Badab Black wash but I also did a little kit-bashing which you should just be able to make out. The Multi-Melta has been bored out, and not with one of those namby-pamby 1mm drill bits, this thing looks meaty now, which is how it should, in my book! I also used some of that plastic strip you get loads of in kids toys, usually attached to wire that holds the toy to the packaging. Here it's a girder which should look cool poking out of the re planet dust.

You should also be able to make out the Dark Angel chapter badge on his right leg. This is from the Ravenwing set. I got a really good deal on a complete set of upgrade parts for the two bikers I'd got. Although I needed a third bike to complete the squad and was able to get a set of four on ebay for the same price as a brand new one from GW so now I need a new Ravenwing upgrade sprue! Anyway, the wings were bent a bit and it was glued in place a little too much glue but at least there's no gaps. 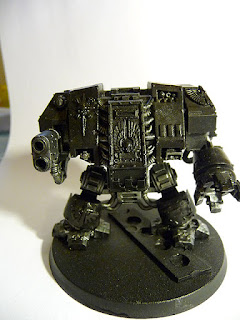 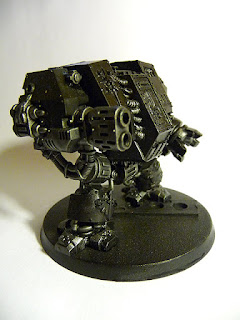 As I am still suffering the fear of Dark Angels green I thought I'd go mainly metallic on the back, with only the front armour green. Still not sure, can't decide if I should make the exhaust manifolds also green or gold. Lastly I put another ﻿Dark Angel chapter badge on the corner of his left arm. I split the wing so it wraps round. It'd have been nicer to have the sword actually wrap the corner but nye on impossible so this is a decent compromise. 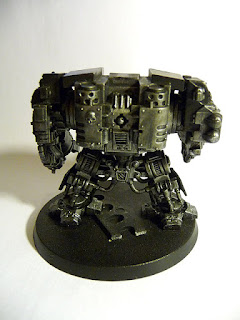 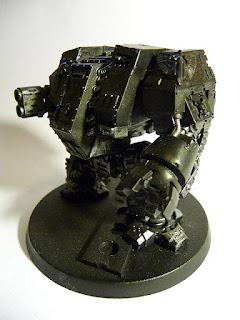 Think he may need a banner though so I may invest in the Dark Angels Chapter Upgrade Frame now it's gone up in price, which would actually allow me to make use of the two metal Terminators I have that are short of a few weapons...
Posted by 40kaddict at 13:01