Legend has it that the Land Speeder (originally known as Land's Speeder) was rediscovered at the very dawn of the Imperium. It was during 's great expedition into the Libraries Omnis on Mars.
The main aim of Land’s expedition into the labyrinth catacombs of Mars was to find functioning STC databases. In this he failed, but two other discoveries were made which revolutionised technical thinking for millennia to come. The first was a near complete dataslab image of STC information about a heavily armoured battle tank. The second unearthed information on rare anti-gravitic plates, and theories on their uses, which eventually led to the construction of the first ‘Lands Speeder’. Land would later be killed on his second expedition. the victim of a psychic entity. which destroyed his entire party. What secrets of the Dark Ages died with him remain a mystery.

As you can see here's an original Land's Speeder and you'll also note this is before we got caught short on the Ravenwing being black. This speeder was unfinished [obviously] but I'm still happy with the Dark Angels green, plenty of blending of highlights there but I really have to decide if it's going to be repainted. If so I have to debate whether to strip it back or just go straight with an undercoat.

The new plastic Land Speeder is a really nice looking model and I love the Land Speeder Storm despite Scouts being rubbish and Dark Angels not being able to field them. However I still like this stripped down version and the two 'beaky' marines are some of the better examples of the way to sculpt the 'beak' 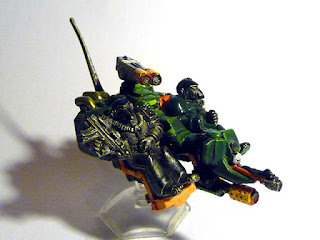 Red ram-jets because ram-jets are always red. Check out that banner pole too! 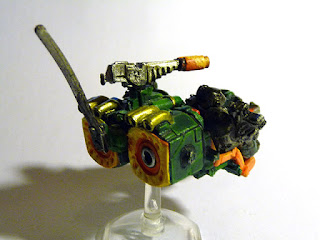 The view from a Warlord Titan, aah sweet! 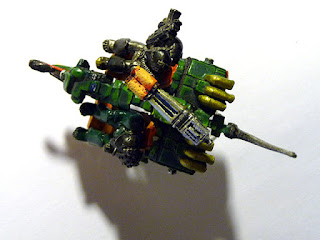