It's been a while since I showed off some my son's tyranids. I've actually got quite a lot of group shots to showcase the whole hive but thought I'd just fill you in on some of the individuals. This here hive tyrant was another impulse purchase on ebay last year. Itt was another bargain, I won it for £10 with £3 p&p which is less than half price! He originally came with Mechrite Red Chitin and the body was a much darker base than I would usually start with for my bonewhite but I persevered. Armament wise this setup may be a mistake. Lash Whip and Bonesword yes, but a Heavy Venom Cannon. I've read some bad reports [see below] on it and given the -1 to the vehicle penetration chart it isn't quite the anti-mech we need but we really have very few options anyway so we'll take what we can get. 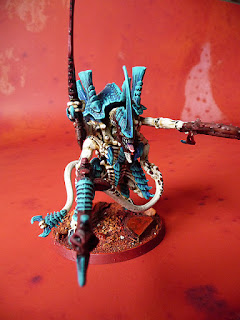 There's still a bit more painting to do on the Lash Whip and Bonesword and Heavy Venom Cannon. Some extra highlights need to be in place. Of course if I were to follow Ghoulios advice at legiominimus:

"The Venom Cannon is the worst gun in the game period. In 14 games with this book I have stunned a very small handful of tanks and on the 14 game I did my first bit of damage to a vehicle and that was blow off the battle cannon from a defiler. The worst part about it is you think you MIGHT be able to do something with it instead of running the big man up to get into combat where he will actually do something. Right after my last game I actually pulled both venom cannon arms off both tyrants right there."

I may well reconsider his armament, here I see the advantage of magnetizing... 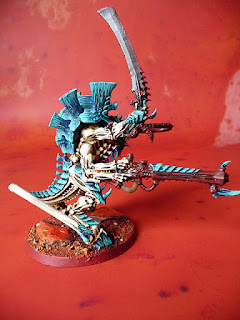 A view of his back armour plate sand more spots and stripes.﻿ 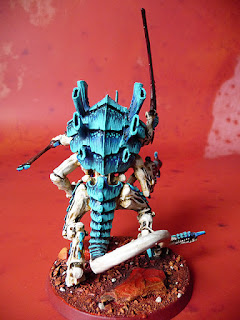 The other side view. 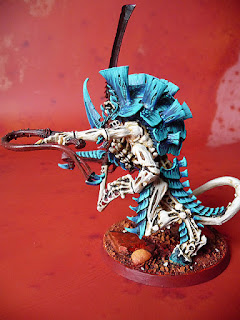