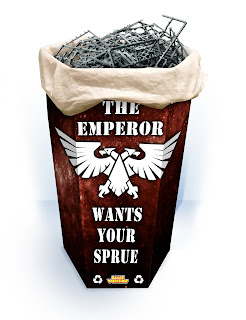 A while back I noticed the large amount of sprue I'd collected after putting together all my son's 'nids and my Black Reach box set. I'd also stumbled across GW's Annual Report that mentioned their increased concerns about being 'green' [well everyone has to be nowadays]. So I suddenly had an idea that GW should set up some recycling boxes to take back unwanted sprue. I was sure it could be regranulated and used again, my Dad used to work for Dunlops making Wellington Boots so the reuse of PVC from bad molds was part of the production process.

So I mocked up a typical recycling box for the Imperium and sent it off to the What's New Today? address on GW's website but never actually got a response. I figured even if it cost GW to return the sprue to their factory the cost was good environmental PR for the company to show at least they're committed to tackling the issue of plastic waste going into landfill. I went on to post the same story on one of the facebook groups for GW fans and some slightly more knowledgeable folks had opinions on the subject and one person said that the plastic could be reused in the formation of poly-cement.

Anyway in preparation for telling my tale and sharing my pic I thought I'd do another search and lo-and-behold I found two interesting threads that said GW already take back sprue, they just don't advertise it so blatantly and there were plenty of other cool ideas for using it in modelling projects, not just as rubble. So check them out I may even try a few myself.