Afternoon #warmongers and #warhammercommunity I've been #paintingwarhammer on my #Tyranid Warriors. Right now I'm reminding myself I get a huge amount of satisfaction from the creative side of the hobby as the gaming aspect is leaving a lot to be desired.

I can't quite recall how long I've had these Warriors in my pile of shame. I think they were from a couple of ebay purchases. I remember vividly two auctions I won one time commuting home from work on the train. The auctions literally ending as the train is pulling into my station and I'm watching the bids to see if I was sniped at the end, but won.

I'd have guessed that was around 5 years ago, but with COVID skewing time up it's probably more like 7 or 8! Outside of a Hive Tyrant, 4 Lictors, 3 Warriors [I'm still debating turning into Shrikes] and all my Genestealer cult stuff [including my Space Hulk stealers and 13 purestrains] this represents the last of my purchased Tyranids! 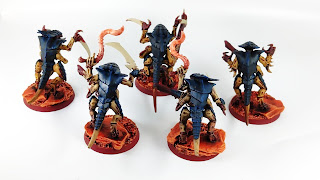 As I've mentioned I fancy a Maleceptor and probably need a Zoanthrope/Venomthrope box to fill out minimum respective broods. But I can't really justify the costs and I've plenty figures I can painting to scratch that particular itch of the hobby. 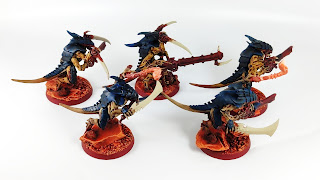 After the 5 new Warriors comes the 4 upgrades to current painting standards [plus Spore Mine].

For the most part I've covered most of the original paint, very little of the Bone has been left unwashed, although I have left it in places. The glossed talons and claws have been left, hopefully and additional coat of gloss varnish will be sufficient,

There's also a subtle difference with the bases of the 3 on the right, as I originally used VGC Bronze Fleshtone for the highlights and now I use the Docraft Pumpkin [which I need a new pot of].

Altogether the 9 Warriors and 2 Primes look like quite an impressive force on my display shelf. Even before any of the highlights it's a pretty grimdark army. Reaffirming my view that with a fraction more care they could be left at this stage. Of course I knew there were other layers to come so I can hide all sorts of mistakes - there's still Red Oxide overspray on some of the legs that I'm banking on adding more texture to the basecoats and shading when the highlights go on.
Posted by 40kaddict at 12:14