Afternoon #warmongers and #warhammercommunity we've been playing #new40k Following our last game we felt upping the points and a bigger board might add the dimensions so far we'd felt lacking. Another 500pts got me a Crusader, which I felt needed the Rapid Fire Battle Cannon for the extra range I' didn't have with my previous games against Ben's Orks. However, he switched to his Astra Militarum, and tanks. Don;t worry he gave me fair warning and I knew a Thermal Cannon would serve me well against them, but I figured so would a Battle Cannon, plus, the range... we rolled The Four Pillars we took secondary objectives but *SPOILERS* there wasn't much point keeping track of score as it became apparent very quickly only one of us was scoring points 😔. 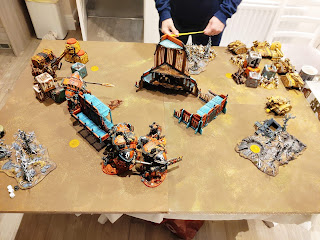 Deployment can feel like quite the disadvantage for Knights. As soon as you put your first model down you're committed. I very quickly surmised that I'd put the Lancer on the wrong side. Although it was a shorter distance to potential targets it was through cover, whereas the Questoris Knights had great field of fire but would be slower to get to Ben's backfield. 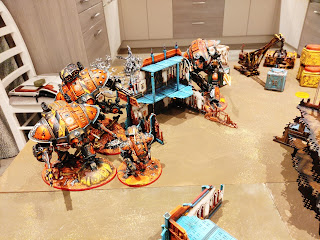 But, I look at it now and realise I can't second guess this,because at the time there are few models on the board, so I've no idea where he's going to put stuff. It's easy to say they're in the wrong place, when you know what they're up against and where they're deployed. And, of course, you don't know who is getting first turn. Ben won the roll off and only moved the Leman Russ Demolisher. 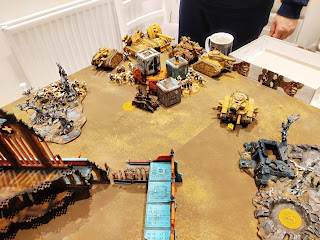 As shooting started I used the Kolossi Eternal stratagem - My Preceptor blended his Ion Shield with the Crusader and Armiger so they all had 4+ invulnerable saves. Now he already had the Ion Bulwark of a 4+ but this would help the other 2 weather the incoming storm. Unfortunately, everything was just thrown at the Preceptor who did blow up but I used a re-roll to prevent any damage to the other Knights. Then with the Preceptor gone, the blended Ion shield fell and the two remaining Knights had to rely on their own shields. I think the Crusader took 2 wounds and the Armiger 4, the Lancer remained untouched. 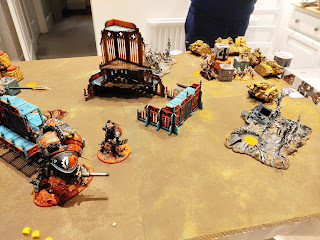 My turn and the Warglaive focussed its attention on the Demolisher, with the shooting and assault combined it was able to bring it down to just 2 wounds, which felt like I was getting somewhere, although I'd hoped to destroy it. Similarly, I felt I made some conservative target priorities with the Crusader - it's Stubbers targeted one infantry squad doing enough damage to force a morale check, it's Ironstorm Missiles another squad for the same reason and Endless Fury and the Battle Cannon laid into Pask's Leman Russ to destroy him, but I think I only halved it's wounds or it was on 4 when the dust settled. The Lancer failed to charge the Bullgryns. 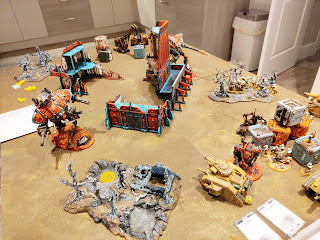 Ben moved his Techpriests up - one repaired Pask so he was back up to top tier. The other fixed the Demolisher and it also Jury Rigged itself for another repair so it was back to 6 wounds. Now in middle tier it didn't take much to destroy the Warglaive. 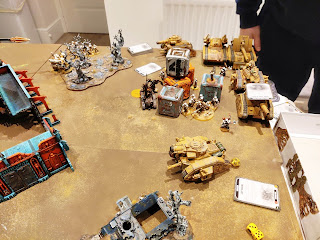 And with the smaller knight out of the way the weight of fire went into the Crusader, who had 15 wounds stripped off it! 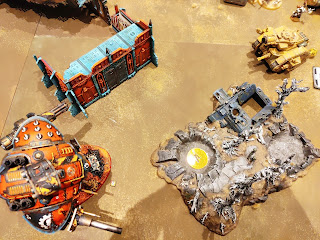 Luckily I had the Machine Spirit Resurgent stratagem to be at top tier wounds on the Crusader. Once again putting all the big guns into Pask to try to kill him but I don't think I did. I then charged the Demolisher. I still couldn't stomp it to pieces. Meanwhile, the Lancer strode over the Bullgryns into the trees and assaulted them from behind, as well as the infantry squad. I'd wanted to take out the Leman Russ, but it was going to be a 10" charge, so went safe. I perfectly split the attacks to wipe out the Bullgryns and by the end there were only 3 Guardsmen left in the squad. 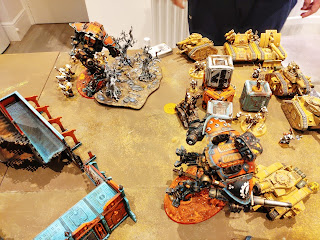 I think I missed pics of Ben's turn here, all the tanks offl-oaded into the Lancer and killed it, with no CPs to give me any rerolls. The Demolisher, still in combat with the Crusader, fired point blank and stripped another 4 wounds off it so it was now left on 5 wounds. In my turn I used my command phase CP to use the Machine Spirit Resurgent stratagem again. I think I fell back 1", finally wiping out Pask with all my 'heavy' guns 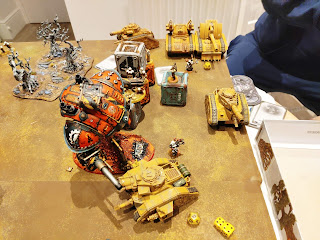 Then I multi-charged the Demolisher and the other Leman Russ. I allocated 8 Titanic Feet attacks to the Demolisher with just 6 wounds to make and all I managed was 3 wounds! I think the other 4 stomps went on the other Leman Russ and didn't damage it! And there was me originally thinking I should have had the 8 on the 'fresh' tank and 4 on the damaged but I was adamant it had to go and still 8 attacks couldn't cut the mustard! 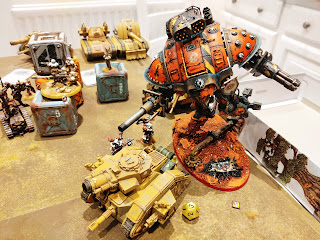 With only 5 wounds left it was easy pickings to bring the knight low for my 5th successive defeat. 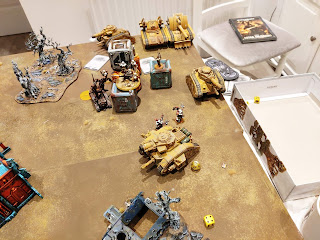 So, what have we learned? Was this a better game? It felt like it, it felt like I was making intelligent decisions but losing first turn and losing the Preceptor, which had arguably the best ranged anti-tank weapon [and 2nd best melee weapon] in the lance, was a big blow. But when you think how long it took me to kill anything, in fact I only killed Pask, the 3 Bullgryns and a smattering of Guardsmen and yet I was deluded into thinking I was doing OK. It says a lot that whenever I tried to score Ben's VPs in the Command Phase he never even bothered to write them down. He knew the inevitable - that his gunline would persevere while my Knights would not.
Which still leaves us unsatisfied. No doubt we will try again, but I thin k with such a wealth of other options - Blood Bowl, Deathwatch Overkill, Blackstone Fortress, Middle Earth Battle Companies and our much paused MERP campaign I don't feel too bad if we just patiently hope 10th edition. Or, perhaps in the shorter term the next Knight or Tyranid codex will solve some of the shortcomings of 9th we're both experiencing. This isn't just me, Ben has won 5 times now and clearly there's no joy in it for him because it's just point and shoot. We're going to try Deathwatch Overkill next.
Posted by 40kaddict at 12:24