Terrain is everything - Aegis Defence Line - SAY WHAT?!

Afternoon #warmongers and #warhammercommunity it's #TerrainTuesday ... OK so I did manage to get another piece of terrain work done and arrange it for a Tuesday! Anyway, Aegis Defence Line... I can't believe I've never taken pictures of this up until now. I think I prepared this at the same time as my Bastions which looks like September 2015. You can see Bastion 2 had been sprayed green and shadow washed after all the texture and crackle paints had been applied. The Aegis was probably done as well, I just never applied the shadow wash.

The other day I applied some black wash to them all, the double wall is that stage. Then I applied a mix of stippling and drybrush of Army Painter Angel Green and then VGC Goblin Green for the highlight. Initially I had the side panel highlighted at the top and darker at the bottom but the middle panel was naturally highlighted at the bottom so I switched it as it made more sense. There are still some inconsistencies but it does work better this way. 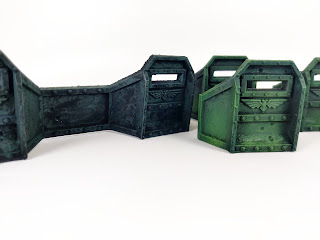 Far from finished though as you can see the two on the right have has some additional shading. This creates contrast and definition and means the rough drybrush is no bother, particularly with all the texture and the upcoming weathering. There'll be some more black shading to add too for even more contrast and I'll pick out the eagle in Stonewall Grey and White. The reverse is also done but there will be some metallic pieces on there, to match my Bastions. 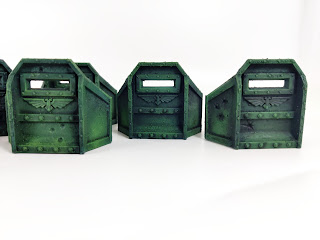 I was really excited to get the four smaller pieces to a much more respectable place so quickly [a couple of hours]. Then I realised these four small ones are only 33% of the wall, so still 67% yet to do green. And then there is the aforementioned metallics, weathering and greys. But it's fun and I'm enjoying it. I was feeling guilty because it was 'off list' but I just discovered it most certainly is not off list and has been on my list for years. I conceded I said it was low down on that list but what a coup if I can get this done [I will get this done]. WiP for over 6 years - another heritage project could be completed - bring it on!
Posted by 40kaddict at 12:07