Afternoon #warmongers and #warhammercommunity I've been #paintingwarhammer on my Genestealer Cult Aberrants. This may even qualify for #Squaduary... Anyway, I haven't posted about these in a year but with so much out of the way I thought I'd crack on with them. They'd all been basecoated, so it was time to wash them. I also was thinking about how to identify units, so the one on the far left has had his skintone changed to a 'turq'. It seemed the easiest one to do, until I realised he has a clone pose on the far right!

I applied a number of washes to the skintone - strong tone, red and purple washes. I then added thinned Khorne Red to anywhere I though might be 'angry'. I'm thinking that step was done too early as I know have to add all the highlights without disturbing that effect. In some respects I even like the way they currently are, but the original test model on the right is where they all need to be.

Next step is to paint all the bone and orange highlights. Getting all these elements finished and leaving the skintone means I can get some interesting pictures from that almost complete stage for if I ever want to explore this stage of the skintone. I'm already committed to the lighter turquoise but future projects, who knows?

The GSC use their clothing as a camouflage for their ambushes, hence why they match up with the bases so much.

I added some weathering to the debris under the Abominant's 'hero' base. You may not be able to see it when the top piece is on but I know it is there. 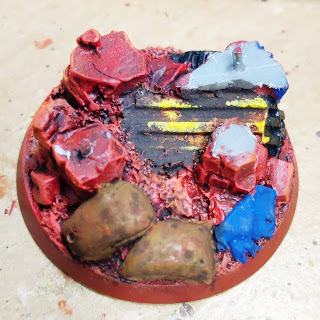 Although I'm focussing on those five models it made sense to do the bone and orange on the other Aberrants. This way when I come to do all the skintones o these models it's only small step for them being complete.

And there are some with red clothes on too, which I will do all at the same time when I get round to it. Chunking it like this will help move things along and hopefully prevent burn out.

Considering that approach it might be surprising to learn that I also did all the orange highlights on my last 4 Nurgle Blood Bowl players at the same time, they'll be in an update soon
Posted by 40kaddict at 12:00