Afternoon #warmongers and #warhammercommunity I've been #paintingwarhammer Dark Angel Deathwing Land Raider Redeemer. As you can see it's very much lighter than it used to be and I've been adding in the red highlights. 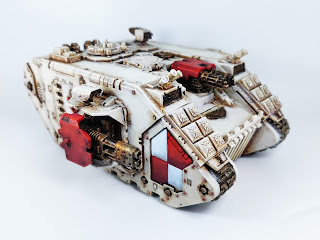 Now I surprised myself with these pictures, they are starting to get where I want to be with this... Except it does not stand up to close scrutiny, I'm far from happy with the result with the bone drybrushing. 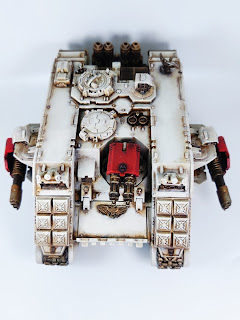 Now I know that with a bit more shading, some extra line highlights and the eventual weathering and damage it'll all be OK. However, despite trying to slog through this I don't think I have the motivation right now to persevere with it. 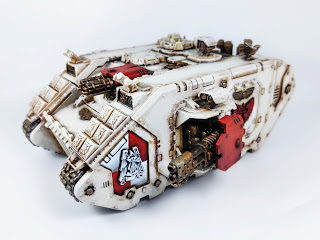 I believe in both going with the flow and perseverance when it comes to the hobby. The path of least resistance is usually the most effective but once in a while slogging through with a project, reaching that tipping point where you overcome the obstacles and it just progresses. 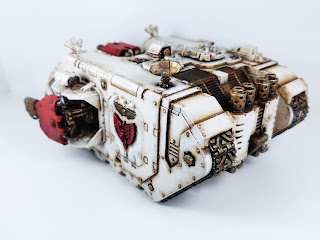 Unfortunately, that is not this time. I think I'm just going to have to chip away with it little by little. Hence why I did the red, which I'm at least happy with. Next up will be to tidy up some of the bone and maybe then I'll feel happier with it... 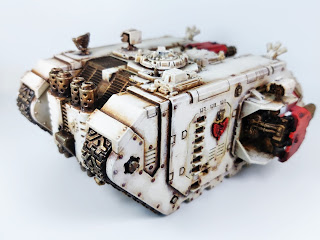 The unexpected side effect of lack of motivation is lack of energy too. I've been really tired at night but mostly I've been going to bed at an earlier time, which is good. I've also been spending time with the boy, we've a little under 2 weeks now until he's off to Oxford so hobby really isn't a priority. On top of that the new blogger interface...😱 Yeah, this is not a great experience, adding images from my photo albums is really clunky and woe-betide you add the wrong one and have to go back into the album of 250+ images and view them in batches of 40, starting with the oldest! 😓
Anyway, I've some content to add so I may have a few weeks of posts to write up, if I can get over my blogger hang-ups.
Posted by 40kaddict at 12:09