Afternoon #warmongers and I've been #paintingwarhammer on those Tyranid models, but I've started to 'taper' [as warhannam calls it] my efforts and focus on the Rippers. So I applied the first set of chitin highlights, against protocol as I normally do the bone first - inside > out! 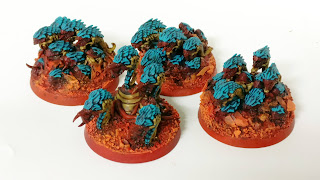 I think I had some turquoise on my palette I needed to use up, which is why I went for the chitin first. I think it might have been over 2 nights. I know a lot of people hate the Forgeworld models for how much effort they take. These aren't that bad but there were moments where my motivation was challenged. 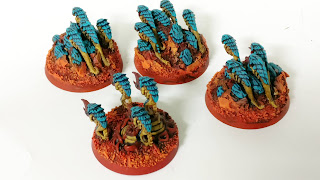 But I was able to surf that crest, get the second highlight done and then crack on with the first bone highlights. With only four to do it was manageable so every time it felt overwhelming I'd almost completed what I had to do. Progress was steady and I could see that my focus would bear fruit reasonably quickly. 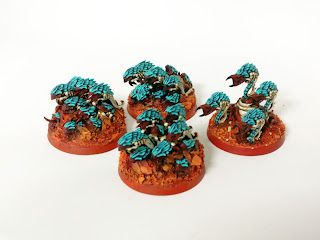 This was such a brilliant project to take on after the Deathwing Knights - so much effort, so many decisions and details. While the Rippers I can do without decisions or delay and just get on with them. 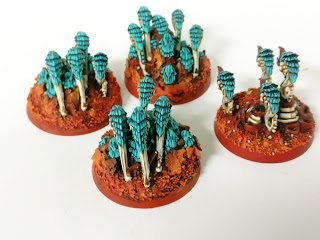 I did have the common sense to keep one of my recent Rippers around, just so I could see how much effort I'd put into them to ensure consistency. 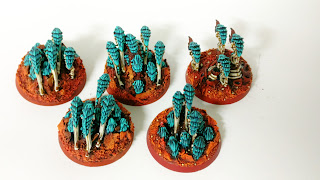 I was surprised to note [although it's not quite apparent in this pic] but my old Ripper on the right has more dark blue visible. My newer ones have more turquoise, not a problem it just surprised me I'd been more reserved. 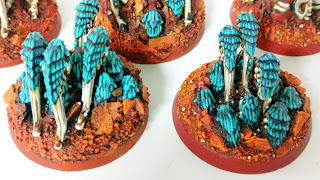 Anyway, almost done at this stage, but I don't think I took anymore pictures as progress was so rapid, just teeth, eyes, claws, a highlight of the red and additional highlights on the tongue and Hive Node. Pick out the Bonewhite chips and edge the base and varnish - gotta love the little fellas.
Posted by 40kaddict at 12:14