As we all face Covid-19 lockdown I thought I'd just post some stuff. Here's an unboxing of the new Adeptus Titanicus set that Liam bought.

Afternoon #warmongers there's been a lot of love online for #AdeptusTitanicus recently and that has lit a fire under my mate Liam to get into it. I had seen the Grand Master box for £162, but in a 25% sale for him, but when I went back the following week discovered the sale had finished that weekend!

Anyway, GW brought out the new starter set and I offered to pick one up for him from Element Games [don't forget my code: DAV910 for DOUBLE Element Crystals] as it's only a short train ride from work in my lunch. Adeptus Titanicus was possibly the 2nd boxed Games Workshop game I bought, in fact I still have the box and most of my original figures. If you go back to the start of my blog you can relive my history with this game. 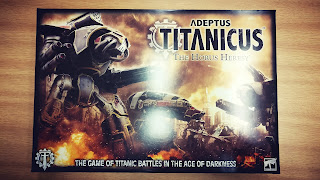 I actually think this new box is great value, mainly in-part from Element's great discount - £72 all in. A Reaver titan is £35 on it's own and you get two so that's £70. For the other £2 you get two Warhounds £34, two Cerastus Knight Lancers £17, the accessory sprue £10 and the full game rules [which are more up-to-date than the Grand Master edition]. So at least £60 of savings, not including the cost of the rules and the dice etc. 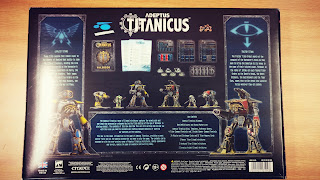 Once inside you've got your sprues. 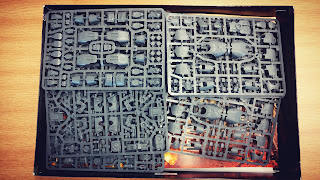 2 of each for the Reavers. 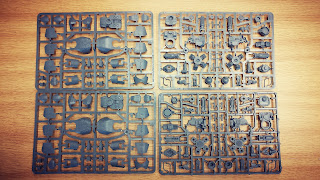 The Cerastus Sprue, that has all different faces to personalise your Knight. I don't think I've seen any other Cerastus weaponry elsewhere but I think there might be rules for them in the box. 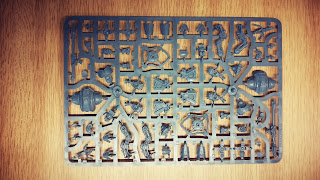 The Warhound sprues and the weapon sprues, which I think are the 2 Reaverr weapon sprues that make up the more expensive 'Reaver battle titan] kit and the Warhound weaponry that gives you all the rest.

Accessory sprue. All the little cog shapes are trackers for your Titan Command Terminals. In the Grand Master edition they're printed on 2mm cardboard with holes punched for the little nubs on the back of the cogs to fit in. In this kit the terminal is a thinner card with no holes. This keeps prices down and means they supply them as standard in the Titan boxes now. It's a simpler solution but game-wise you may want to stick the cards to 2mm MDF or cardboard and drill/punch holes to except the marker nubs, otherwise they'll be skittering across the table with sadistic glee. 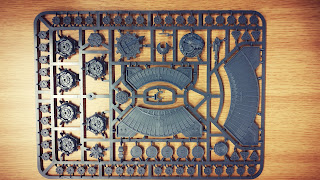 Hooray for blast templates, nice to see they found a use for these again. 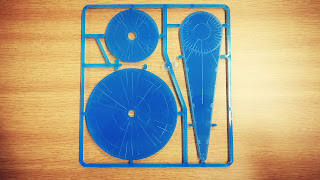 The now customary art sheet, keeping the paper rules separate from the stabby sprues that might otherwise leave marks and dents in the new paper books and materials. 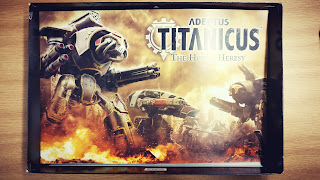 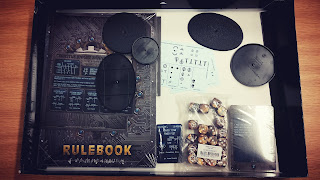 I'll be delivering the box to him, we're going to have a bit of a build session and much like Blackstone Fortress I'll be helping with the painting so we can get playing. A lot of this feels like we're entering into another game system but I think that's in part because 40k feels so complex and convoluted now. I think we're all after something a little simpler, with less rules upon rules. Although I see there a re 'detachment style' benefits to certain maniples of titan hopefully it's a stabler set of rules that aren;t ripe for abuse.
Posted by 40kaddict at 12:06