Since their creation I've always had a fondness for the Ad Mech range. Back when I was disciplined enough to stick to just my Dark Angels and Tyranids as armies I said to myself if I ever had a third it'd be Ad Mech. Then along came Genestealer Cults and as is their insidious nature it was such an easy step to build a complimentary force to go with my Tyranid Genestealers. Deathwatch Overkill also supplied a Deathwatch Kill Team [but that's not REALLY another army is it...] and my one Imperial Knight, became two which became six! And the Forgebane box that gave me the Warglaives finally provided me with the beginnings of my Ad Mech force. As time has gone on it seems I want to paint them too and as they make a more reasonable CP 'farm' than my Dark Angels for the Knights I may need to paint them as well.

Ad mech have already featured briefly in the history of Ferron Proxima and I always had an idea they would be yellow, how that fits with the yellow parts of my GSC I don't know. Despite being my favourite colour I'd not wanted to contemplate a yellow army [until the GSC] purely because my Elf Blood Bowl Team was yellow [sadly a lot of those image links seem to have come undone ☹️]. This has nothing to do with the almost universally known difficulty painting yellow, because the chevrons on my Imperial Knights convinced me I can do it no bother. So I wanted to use that as a basis - instead of red with white cogs I was going to go more construction - yellow with chevrons and wanted to see what that looked like - Photoshop! I probably wouldn't do that much chevrons on the edges and on occasion would increase the scale but I was reasonably impressed with my rendered vision. 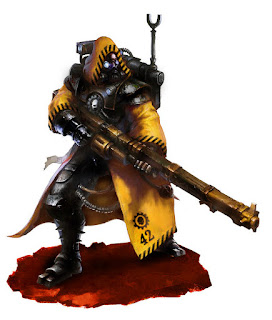 I also was considering trying out the new contrast paint to achieve the yellow because the results for that colour look great and it would be so easy. The hard part is accepting that process when in my head I have my yellow recipe and I'm not sure I want to compromise on it. It would save time but would I feel the result is as good? I know these figures are fiddly to paint so time saving would be a good idea but would I 'feel' I'd not put my best into it? Then again how awesome does that yellow look? 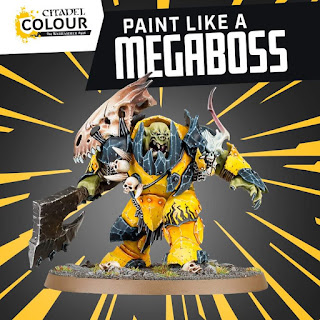 And then I considered an alternative. If I was going down the Contrast route why not go full Grimdark - oily brown leather overcoats, with dark weathered oil-stained armour and clothes with faded orange markings. Finally trying to do some Blanchitsu...? 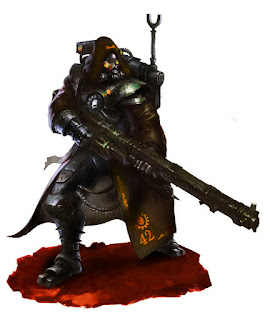 I've no immediate plan to follow up on these concepts, I may build some if I can settle on their load-out but it's either go with something that totally fits my existing 'world' and painting or go completely left-field [not to mention does not have the same impact visually for the likes of painting comps...]. Lots to think about still but at least I have two interesting opportunities to explore.