What GW should do - Sisters of Battle

Oh my, I just found this 'draft' post and as it was originally scheduled for publishing 24th March 2016 it stays on that page, in draft format and never having been published I completely forgot about it. So thought I'd just share it and ironically that first paragraph is now completely redundant! 😂 So now we know it's going to happen and they're keepign us informed on a regular basis I can't help but hope this will be a major success for them and a massive vindication for all Sisters fans. 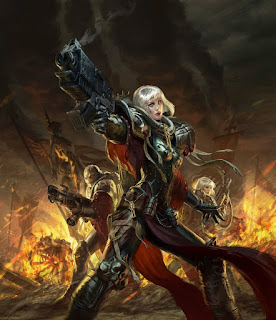 A lot of my ‘what GW should do posts’ never get published. I’d hit upon an idea, start to write it up, postpone it, focus on hobby and by the time I got back to conveying my ‘expert opinion’ the situation had either resolved, my opinion had miraculously been the right one or it was no longer relevant. So this time I’ve hit upon an article that I can safely spend shedloads of time writing safe in the knowledge GW won’t resolve it before it’s published – release new Sisters of Battle!

Let me just say I have zero interest in them as a faction [good start there Dave] but that doesn’t mean I can’t see how passionate folk are about them, well they’d have to be. For years they’ve been buying metal miniatures at ridiculous cost just to keep their space nuns on the battlefield. These faction fans are more faction fanatics and they deserve their range in plastic. Of course there may be some concern that those who play Sisters won’t invest in new models, they’ve bought they’re armies so won’t need to invest… but I think they will. They’re so starved of attention and the neglect of their faction they’d throw their money at new models.

And let’s not forget new faction players. They’d lap up new models wanting to jump into the next big thing. They did it with AdMech they’d do it for Sisters and you can guarantee that due to the complexity of the models you’d be paying slightly more for them than say 10 Imperial Guard. And if it’s new players you want what about the 50% of the population currently under-represented in the hobby. Yes, girls will identify these, not all - they like to game with male figures too, but there’s a lot more for them to identify with and surely that’s a market worth exploiting exploring. But we all know that guys are into Sisters, for a variety of reasons, but also for just the pure escapism of running a different gender.

How GW can’t see how successful this would be is beyond me. Like I say it’s no loss either way for me but I feel for those whose faction has been woefully neglected and I really can't understand why commercially this isn't a no brainer. When you consider how much interest there was over recent kitbashes using Dreamforge's Valkir plastic kit, delaying is not doing them any favours And to think we've had Genstealer Cultists, Assassins and Harlequins before a proper plastic range for a current faction...?
Posted by 40kaddict at 12:17