What GW should do - Space Ghosts

Now the thing with a blog is quite often you have an idea for a post and then sit on it. I've 20 draft posts, a dozen of which are probably posts I should just finish/publish so I don't have their ugly 'draft' status staining my dashboard, so here's one I prepared earlier, much earlier!

In case you didn't know I've bought Citadel Miniatures and GW products since the late 80's. I also have a blog, it's quite cool you can view it here. Those two facts alone qualify me to make 'suggestions' to Games Workshop and their subsidiaries in how they can grow their company/improve their products. On many of the forums and social media platforms you see people theorise, or usually ask, what GW will do next or what new faction they'll create. A while back I was struck by a vision of one such faction. To be fair it's not a great idea and I'm sure when GW announce something wholly new we'll be super impressed, but I was compelled enough to put it down on [digital] paper and then couldn't be bothered to publish but now I've bit the [mass reactive] bullet and I give you - Space Ghosts! 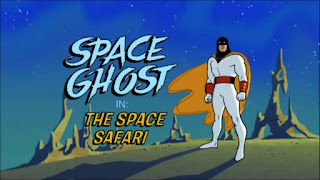 Sometimes GW creates something that is pretty darn special, exceeds expectations and potentially creates even further things. Case in point the Lord of Plagues - this model is an absolute classic. I'd love to know where it stands on the most popular figure sold numbers. John Blanche himself must have hundreds!
And this success eventually spawned some similar models to try and capitalise on it's awesomeness - we got the Putrid Blight Kings. Models that bore a passing resemblance, following the same aesthetic but growing your unholy filthy horde. Not forgetting Gutrot Spume and the Lord of Blights. 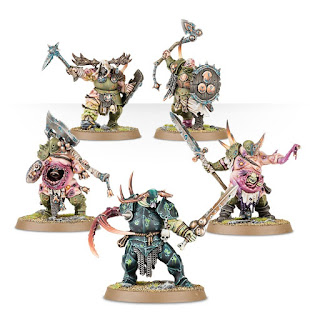 Also in Age of Sigmar they learned a lesson from this with Spirit Hosts - these were undoubtedly awesome and commonly used in 40k too. 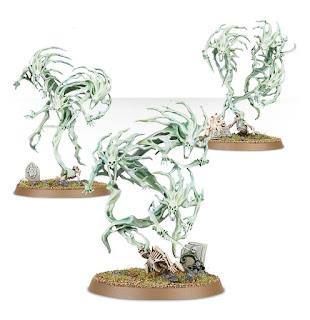 They must have been successful because they eventually got their own faction - evolving into the stunning Night Haunt. And that even brought new technical paints to the table too! 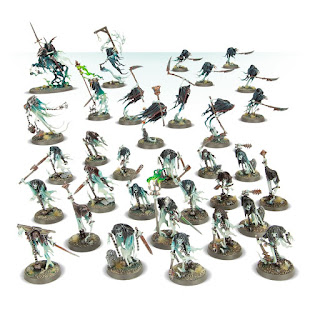 Which begs the question - what the flip are you talking about Dave? Well, in a few months time we will have every Codex complete for 8th Edition 40k. The Sisters will be due in 2019, blessed be the faithful who waited for that Blue Moon but after that the Universe is their oyster. Age of Sigmar has shown true creativity in bringing new armies - Kharadron Overlords and Idoneth Deepkin for example into their worlds. So what of a new and different army for 40k? Well this is one of the questions that  gets bandied about all the time and I had a sudden idea to take the highly successful fantasy ghosts and why not make 'space ghosts'? But not so much ghosts as a purely energy based army, beings of non-corporeal power.

You could extrapolate the Night Haunt into angular lightning beings, again the recent Malign Sorcery spells show just how cool and exciting that sort of abstract shape can be. And all those lightning bolt style extrusions would be snapped up loads to kitbash Psykers using their powers! I know as a concept it's kind of lazy - GW will no doubt eventually come up with something that is totally unique and awesome but I just thought Space Ghosts would be pretty cool. When I originally wrote this they hadn't even come up with the Skaven spells but lo-and-behold that sort of angular lightning effect was something they'd already begun to explore 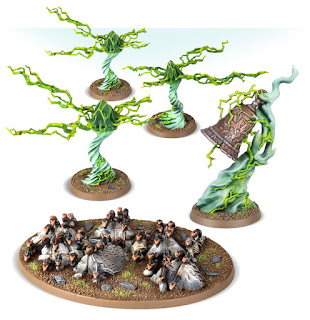