Otty had a free evening and wanted to arrange a game but that created a problem as I wanted to run my Knights for convenience but I was certain Otty's Tyranids would be on the road to a hiding if I did. Once again I looked at some of the narrative missions but as it turned out we went with the same mission I played with Liam - the Echoes of War mission in Vigilus Defiant called Forlorn Charge. It was Knights and Freeblades versus Ork Stompas, Morkanauts and Gorkanauts. It compressed the Knights into a 2'x2' corner with the 'Orks' creating their 'scrap city' and deploying first. There were also benefits for running a Fortification network and some additional stratagems. 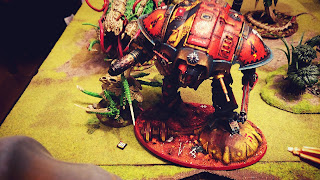 What we did was swap out the Ork elements for Monstrous Creatures. This wasn't too bad really as victory conditions were for my Knights to destroy all his Knights and buildings for a Major Victory, Minor if I killed more than were left alive and Defeat if it was any other result. Otty went with 2 Tyrannofex, Old One Eye and 5 Screamer Killers, a Harpy, a Trygon and a Trygon Prime and a load of Hive Guard which we put in his Bastion with a Quad Gun. All in I think he had around 2,000pts [not including the Bastion]. 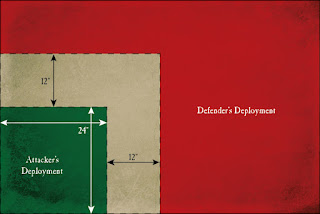 Otty deployed the terrain and put the Bastion [gaining 3CP extra] in his back corner out of reach of my Knights with the Hive Guard inside. The Tyrannofex and Harpy offered support. 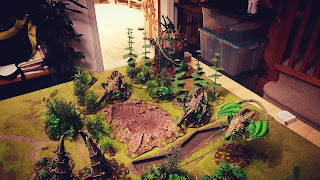 But he deployed the Carnifex right opposite me just 12" away. Now the mission stipulates I would get first turn but I realised with his Carnifex that close my Knights would stomp all over them so I gave him first turn. Tyranids had raised a barricade across the battlefield to slow my advance down. 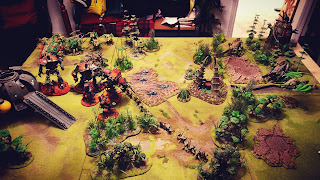 The Tyrannofex shot at the Lancer, doing some damage with the Harpy. The Hive Guard were out of range. Otty's scratchbuilt Spore Pods almost look like they've just disgorged the monstrous brood, they did however form sufficient obstacles to prevent a straight run at my Knights. 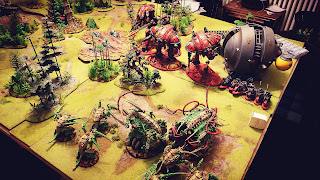 So charge distances were not a sure thing at least. 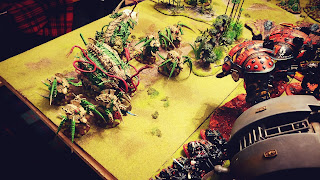 Out of the 6 Carnifex OOE and 3 others were the only ones to make their charge. A bikes took mortal wounds from the charge, then Lady Pettorini was battered, first one Screamer Killer taking off 3 wounds, then another taking 3 more. Then Old One Eye ripped her to pieces with 18 and thus illustrates our lack of experience. OOE should have gone first and then I should have interrupted, but I forgot and Otty was systematically going from left to right instead logically going from best to worst. 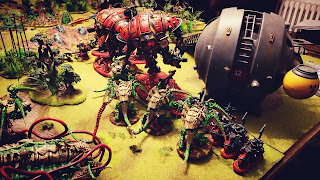 To cap it all I eagerly wanted to blow up, hoping to use the Noble Sacrifice stratagem but was reading the Valiant Last Stand, which would have allowed me to attack if I didn't blow up and I got a 6, so it blew up anyway! I could have re-rolled and then used the strat but it was all so farcical. Bikes died in the explosion a Carnifex took 5 wounds, OOE and another 1 and the final one 6. Ser Ellenbogen and and Armiger also took damage. 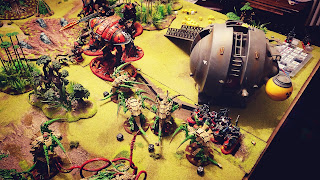 With the Carnifex being the immediate threat I repositioned, with the Ravenwing falling back, Ser Ellenbogen vaporising one Carnifex and the Warglaive taking another. I charged the three remaining monsters and killed OOE, but Otty used the strat to attack before he dies - putting wounds on my Knights. He then used the interrupt strategy too! Suddenly my combat phase was Otty's and yet more wounds went on the Knights, the Lancer was down to 13 at least. 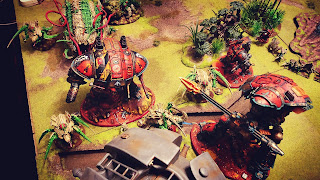 It was not enough though and Warglaive and Ser Ellenbogen wiped the Carnifex from the face of the planet, just the last remaining Carnifex in that corner. It was quite surprising how ineffective OOE was this turn, to which I think I recalled in the first round we'd been doing 2's to wound on the Knights when it should have been 3's. 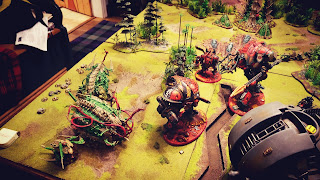 My second Warglaive had tried to bring the Harpy down but failed due to being damaged. The Harpy returned the favour in Otty's turn 2 over-flying the Knight and leaving Spore Mines in my DZ. 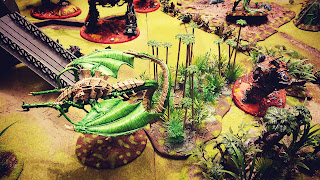 But with Heavy Venom Cannons the Armiger couldn't stand. 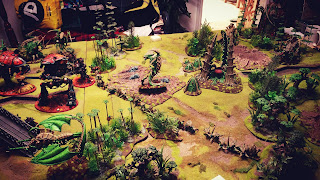 Bursting from the ground the Tyrgon and Trygon Prime were possibly going to stall my advance and allow the Tfex another round of shooting. I think the second Warglaive was their target and I burned a re-roll to keep it's last wound and force the second lot of shooting on it. 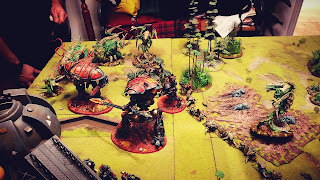 It took the brunt and fell, sacrificing itself to leave the larger Knights [mostly] unmolested. 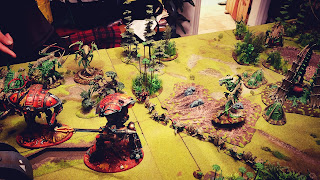 Ser Ellenbogen smooshed the Carnifex and moved off, with neither of the Trygon's making their charges - the Tyranid barricade proving equally disruptive to it's own as well as the Knights.

But not in my turn as the Lancer stormed behind one Trygon and Ser Ellenbogen went for the Prime. 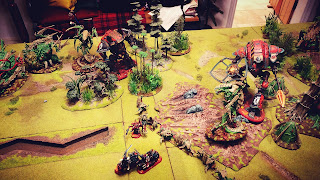 Inevitably the Tyranids couldn't stand against such titanic opponents and both Knights consolidated toward the remaining monsters and Bastion. 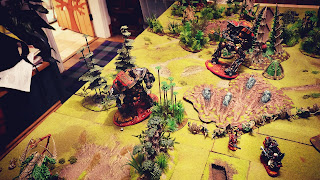 The Tyrannofex were not to be steamrolled so easily though and took all but 1 wound off the Lancer with their Rupture Cannons and the managed to take it down with a single Stinger Salvo wound that I failed to save. With the Lancer gone Ser Ellenbogen couldn't make the charge to the last Tfex [the other one shot by the Thermal Cannon]. And with that we called it a night, I'd secured a minor victory with the Carnifex gone anyway. 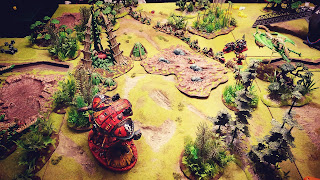 Thankfully Otty felt like it was a good game but clearly it was very one-sided in favour of the Knights, despite:
It just illustrates the advantage Knights have over some other factions [or in general] and taking into account I'm not a good player too! Next time I'll go back to Tyranids as I think there are learning opportunities for us both if we run the same faction, much the same way as I learned things when Liam and I both had Knights. With hindsight the Hive Guard were wrongly positioned in the Bastion, if they'd been in the crater behind the Capillary Tower they'd have been double shooting each turn. Also the Trygons could have been on the board with the Carnifex or on my other flank to force me to split my army up. Again that 12" No Man's Land and first turn could have been used more to Otty's advantage. Hindsight = 20:20!
Posted by 40kaddict at 12:20