With both the Sanctum Imperialis and my Ravenwing Dark Shroud as priorities the Sanctum took preference when I balked at the Speeder, so when the Sacntum became troublesome I used the fact I had to patina the building to simultaneously do the same on the Speeder. Not that it'd likely weather in these areas [maybe the grav plate holds moisture in the up-wash...?]. 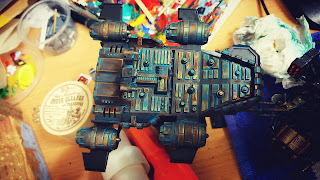 But this was another example of 'misdirection', like how my Mum used to give us veggie-burgers with sausages just as a way to have more vegetables on our diet. If I'm going to push on with one troublesome task I may as well do the same on another project. 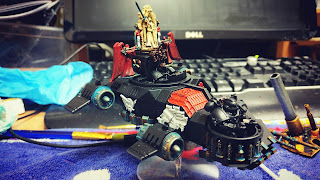 At the very least it's one less thing to do, to make it easier when I pick it up in earnest. Thankfully the thought of painting the black meant I was not easily distracted from the Sanctum. 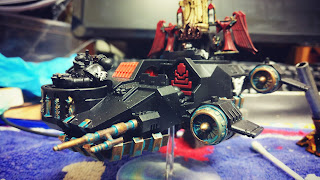 I'll get back onto this when the Sanctum is complete but small steps. I think the controls and touch some of the metallics up will be next. I won't mention how I think the verdigris on the engines a little too much, the last hting I need is another crisis of confidence - just get stuff done and move on!
Posted by 40kaddict at 12:10