Terrain is everything - Sanctum Imperialis - The blues [greens and turquoisey bits]

Annoyingly I was beginning to stall on this the raw bronze matched the red walls so well with the  cream interior complimenting it all and I was going to throw all that turquoise into the mix?! But before all of that I needed to gild the doors a little so they were a little more brassy/polished bronze. At least that was all I'd hoped it would be. 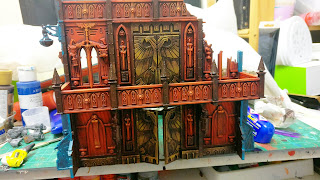 I'd already gone full verdigris on the roof top. There had been an original plan to do it rusted steel but if I chickened out of weathering the buttresses [obviously I didn't when you look closely] I'd have explored the effect in the roof at least. Unfortunately, even with my Photoshop mock-up and the reality in my hand I started to doubt this route even more. It was probably what prompted me to build some new figures! The roof is fully highlighted but I'll be putting some shadow washes on as I've been observing some patina'd overhead power cables at some of the train stations on my commute and black shading appears in some areas. Ideally that should have captured by the Warplock Bronze base - at which point we question why I did any of that but I'm a slave to the process... 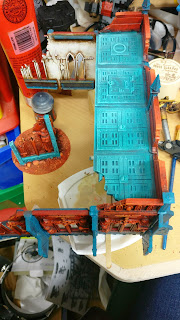 Ultimately I just threw on the Hawk Turquoise. I came to the realisation I should just not care. If it goes wrong so what? This may well look odd and garish on the battlefield but often reality isn't always colour matched and complimentary, sometimes things just do look out of place. Failing that I could always repaint! 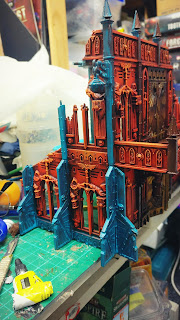 Having thinned the paint down a lot I needed to paint one side of each of the buttresses and leave it to dry properly before flipping to do the other side or the paint would just bleed everywhere. 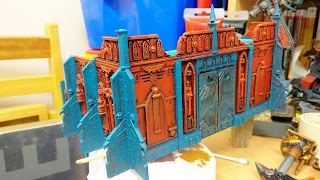 A bit of a faff but now I'm ready for the highlights which will be mainly drybrushed so it should be straightforward. Just need to crack on and do it.
Posted by 40kaddict at 12:25