Following on from February's Battle of the Brush [or 'Tale of our Warlords', as it's also known], March's category is Characters. I entered my Space Hulk Genestealer Broodlord, aside from the Terminator Librarian [which might feature in June...?] it was my most recently completed character. Obviously if I could paint something in time I would but my priority is my ongoing projects so some months it will be legacy miniatures as my entries. So long as they've never been in the cabinet before, the store is OK with that. Luckily my Sanctum Imperialis will count as a 'Large Miniature' in May, if I get it done that is!

Anyway, I didn't get a lot of pics but these are the highlights. I think I was lucky in that I did capture the top three etntries with this Wight King gaining the top spot. 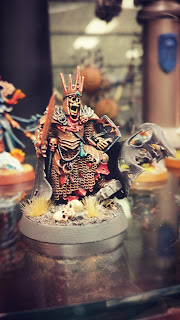 Gandalf was 2nd I think but he was absolutely stunning. You can even see Sir Ian McKellen in his face. 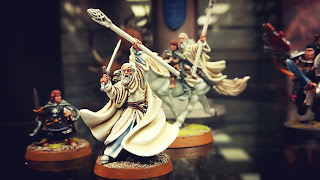 Riding Shadowfax too, and Merry or Pippin [I forget which].

An Isharann Tidecaster and some kind of Troggoth

Watch Captain Artemis and Spirit of Durthu - this Sylvaneth army is growing month on month so I lookk forward to seeing more entries.

Some additional entires, including a Biophagus. 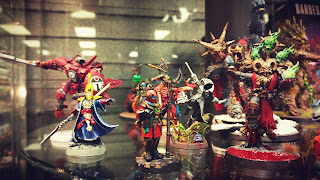 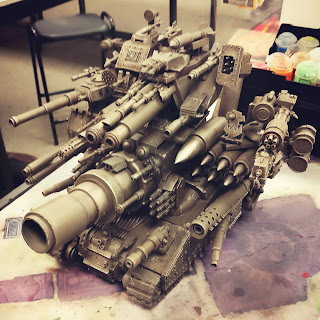 One of their taster tables, I like the fact it has the standard Realm of battle board next to the Sector Imperialis gamboard. I quite fancy having a couple of those to sit next to my own board as a transition to a more urban area, even if it's a nightmare to play on! 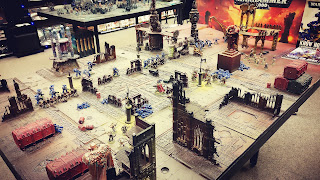 I'll be taking regular pics throughout the months for this challenge, so enjoy.
Posted by 40kaddict at 12:11