Having concluded that my Sanctum Imperialis should be verdi-gris I promptly ttried to avoid the task. Sadly I didn't even avoid it with any of my other priority projects. I spent one night making the torso of my Redemptor Dreadnought [more later] and the Aberrant Hypermorph. The next, night fully intending to paint I only went and made up all 8 of my remaining Aberrants. It says something when building until 1am is a more appealing task than painting that building green! These two are from the new Aberrant kit, but I think the power hammer dude has a Deathwatch Overkill head - they're more gormless looking

I went with 3 power picks, because with 13 Aberrants in total I planned to kitbash another 2 and the spare hammers seemed an easier proposition to convert, although I may just be completely wrong on that viewpoint.

Having 4 Deathwatch Overkill models already I needed to do a couple of things to differentiate these. The first had its raised claw cut and tilted downwards. Then the second claw holding a skull was removed and a spare claw, possibly from a Space Hulk Genesteal was attached - it's slightly bigger than normal. He also got the 'elephant man' head from the new kit but it might have been a mistake as you can't radly see the side of the face covered in skin. The other figure got a new kit headswap.

The robed guys, first one had it's raised arm removed and thn effectively put back in the same position because I couldn't remember what it was like. I did put a little 'dewclaw' in the elbow joint though. I also swapped out the skull holding claw for the smaller Stealer clawed hand. Lastly the power pick was separated from the chest and pointed outwards. The power hammer dude got a new kit headswap, allowing it to look in a different direction.

I might need to add some chitinous armour plates and possibly some adrenal glands/toxin sacs to make them look different to their duo-pose bretheren below. I also need to decide on bases, do I get another set from bases4war.com or just  do my own? Obviously there's a financial implication and although the bases are effectively complete the washing, sanding to fit the feet, gluing and washing again to get rid of the dust is as much effort as PVA, grit and little bits of debris...

Here's my early attempt to kitbash 2 more Aberrants, although one could be another Hypermorph so would need an 'improvised weapon' of some sort meaning I'd actually need to kitbash a third. Anyway, I had some oAssault on Black Reach Orks lying around doing nothing so they're bulky enough to form a base. I cut the arms off and trimmed down the neck to fit the steel collar of the eventual head. I also have a spare Genestealer leg to replace a foot so it's more 'Tyraniddy'. 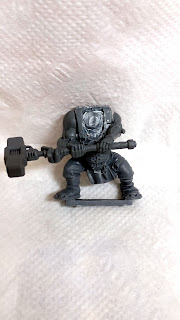 I realised this hammer came with an upper-torso, so I'm going to really trim back the top of the Ork so it replace it. I'll greenstuff some robes as well to try and cover the orky fashion up too. 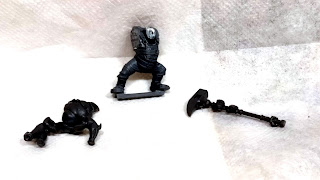 Here's where I'm at with my Redemptor, I couldn't even leave this stock. I had a big Dark Angel chapter badge I was going to split but then I found this one that I'd already removed the sword from and it fit perfectly. I might also put the Dark Angel Relics on a rope on the exhaust manifolds on its back, as that also fits perfectly. I'm going to bling the shizzit out of this, loads of purity seals as I'm guessing he earned them already to be in this thing! ;) 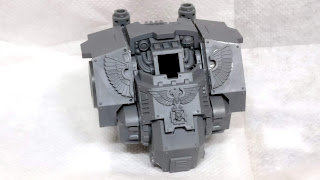 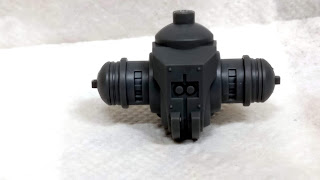 Hopefully this procrastination was sufficient to get me back to the Sanctum, we shall see.
Posted by 40kaddict at 12:00