I've been sitting on 4 Ymgarl Genestealers since I won those bargain ebay sales which provided a fair few Termagants and 4 Hive Guard conversions. I finally managed to win another auction of 5 Stealers, but with loads of heads for variety. Below is the basic builds with the 5th Ymgarl in the rear on the right, using Hormagaunt Scything Talons bbecause I was under the mistaken impression I had no more Genestealer 'stubby' talons. Still these are mutating every turn so there should be a little more variety in these and I need them to stand out compared to normal stealers. Therefore, with no real need I decieded to make some tentacles for some slightly more unique Ymgarls [you'll have seen my tutorial on this the other day]. 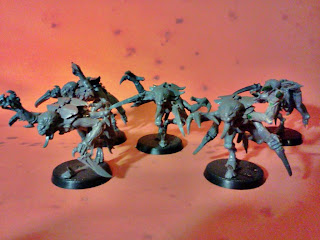 First up, is the triple tentacled fiend, using the 'blind' stealer hed and some Monstrous Creature armored plates. I appreciate this is showing all it's mutations at once but my Ymgarl genestealer mutation markers handle that aspect of their rules so I can indulge my modelling however I like. 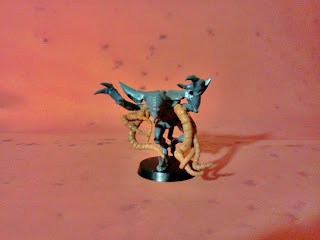 The tentacles did break in some places so a healthy dose of Superglue is holding it all together, and my fingers for a tense few minutes! 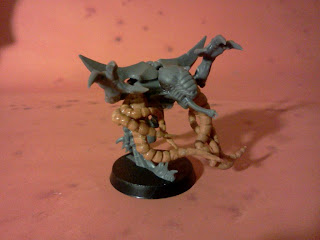 The double tentacled Ymgarl has the same 'blind' head but I was short an extra armour plates so I split one in half and positioned it at the front and then used two Termagant armour plates behind it and it works pretty well. 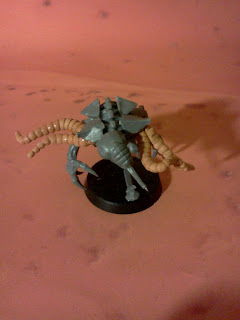 The tentacles on our left are a bit flat, thanks to the heat unwarping them but the right ones are spot on. There's still an argument that just because they have weight doesn't mean they should droop and as it is turning away from the arms on the right they would fly out a bit... 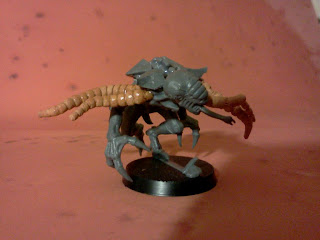 The single limbed stealer. These tentacle came out the best but I was concerned the might stil snap so notice the claws manage to cover and protect the Milliput. 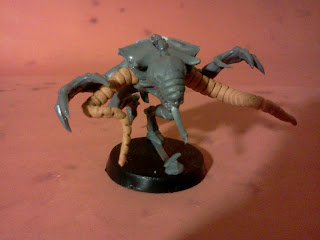 The extra armour plates are made from a single Monstrous Creature plate with the blade edge removed, then split in half. Then a Warrior Plate was also split in half and they were joined together. Quite a neat little hatchet job that I think wil be nigh indestinguishable once painted. 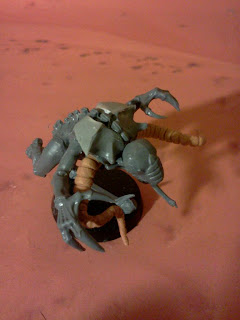 Lastly was a complete mix-and-match. The last tentacel [the worst of the bunch] a Hormagaunt Scything Talon, a Rending Claw and a normal hand. 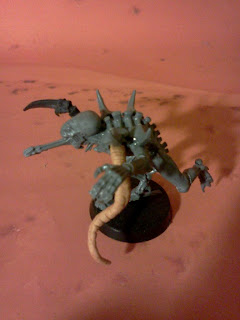 Ectar armour courtesy of termagant biomorphs. I jst wanted to use up some bits and show how mutated they could be even though I had plent of limbs to kit it out more uniform. 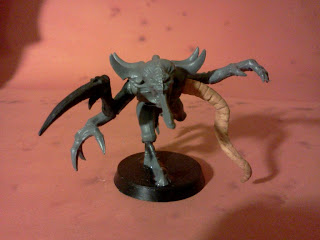 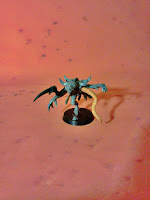 Here are the four brothers 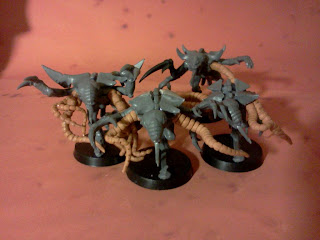 And this is the complete nine Ymgarls. Granted you can pretty much see these are two groups but the silver lining is if I had one more stealer I could kit it out with Tentacles so I could run two broods of 5 which would be handy. 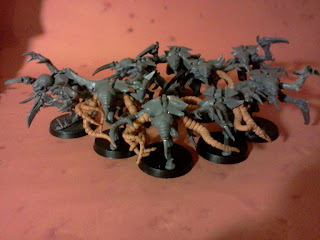