My gaming buddy Ben has been doing a lot of charity work recently. Having regularly mullered Liam, Otty and myself with his Necrons he decided to throw us all a bone for a bit with his Orks. Chalking up a few loses he's back from the dead with his crons, I'd say throwing us a bone but maybe that's a pun too far. Again this was his Throne of Skulls list and it was my second game in two days. 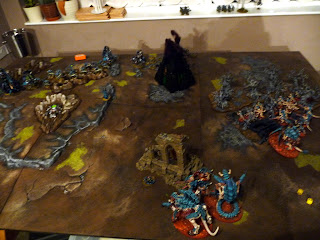 Hormagaunts and Stealers were in the woods to capitalise on their 'move through cover' with the Tervigon for support. Hive Guard Zoan Tervigon Prime and Trygon out of range behind the ruin. 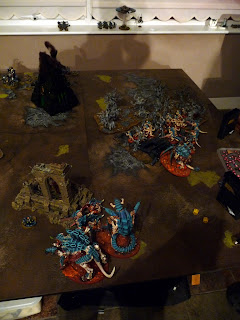 Two Annihilation Barges, Command Barge, Ghost Ark [next to the objective] Immortals in the crater field and Spyders and scarabs on my right flank. Ben went first, I elected not to steal the initiative. I think a couple of Hormagaunts bit the dust but mostly I remained unharmed. The Spyders spawned but one took a wound for his efforts. 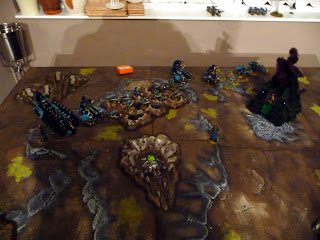 Tervigon Prime spawned 12 and everything went forwards, the Trygon through the ruins and the Hive Guard to get in range of the Spyders next to the wrecked Necron Monolith. The Zoanthrope discovered the nearest objective was a Grav Wave generator [units charging the controlling unit halve their charge range] 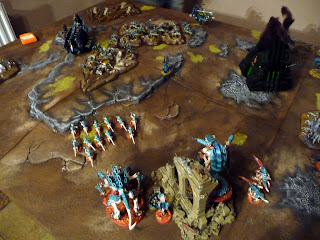 The vanilla Tervigon pooped out spawning twelve termagants who discovered a sabotaged objective but managed to leave it undisturbed. It also tried to Enfeeble the Spyders but was denied, the Broodlord however succeeded. 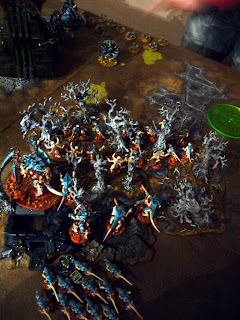 The Hive Guard capitalised on the weakened Spyders and managed to shoot down one of them. 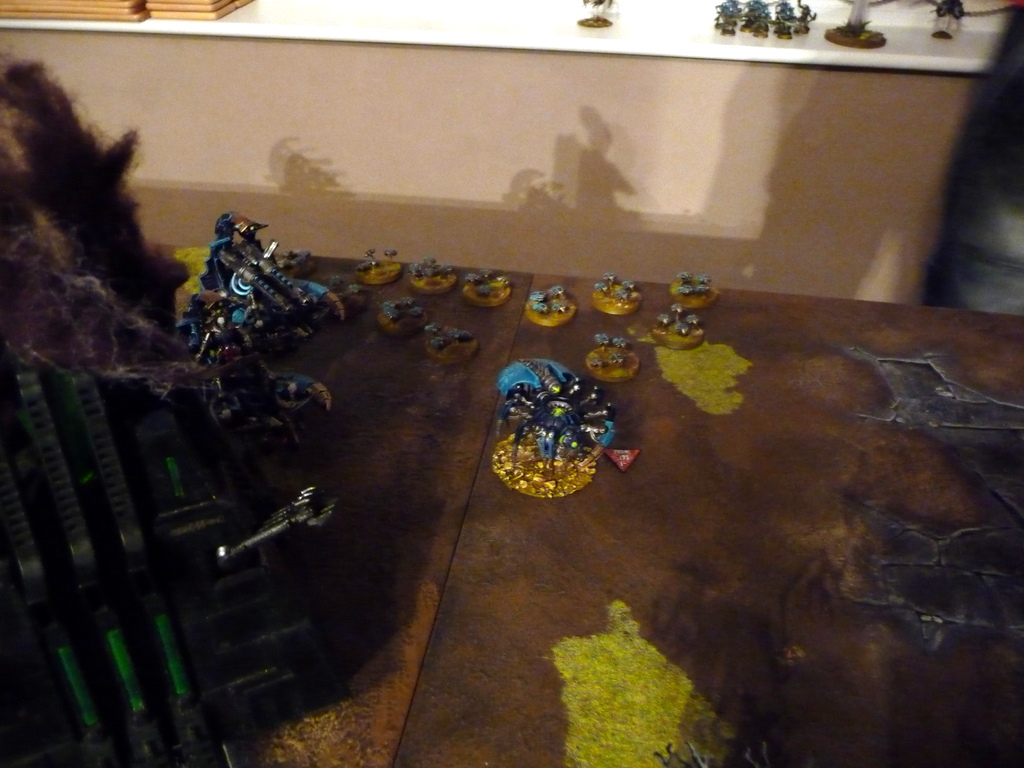 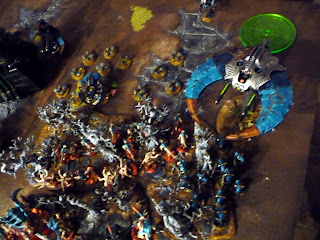 The sky was rent asunder by the sonic boom of Necron night Scythe, disgorging a squad of Immortals into the forest in an iridescent flash of lime green. 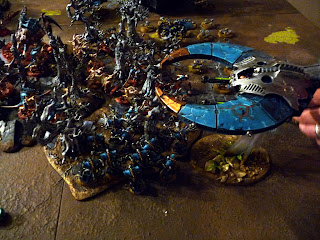 The Command Barge skirted round the Monolith with an Annihilation Barge following closely. 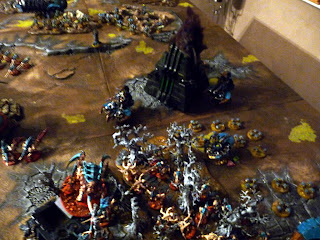 The Ghost Ark moved to broadside the advancing Termagants and a unit of warriors disembarked into the ruins of a crashed Imperial Lander, unawares the reason for it's destruction lay dormant under their feet. Their combined fire kill all but one of the Termagants. A Tomb Blade shot on from the board edge intent on destruction. 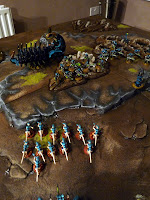 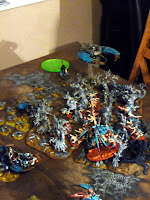 The combined Cryptek's Abyssal Staff and the Immortals Tesla fire destroyed all but one of the Genestealers and some of the Hormagaunts and put two wounds on the Broodlord. 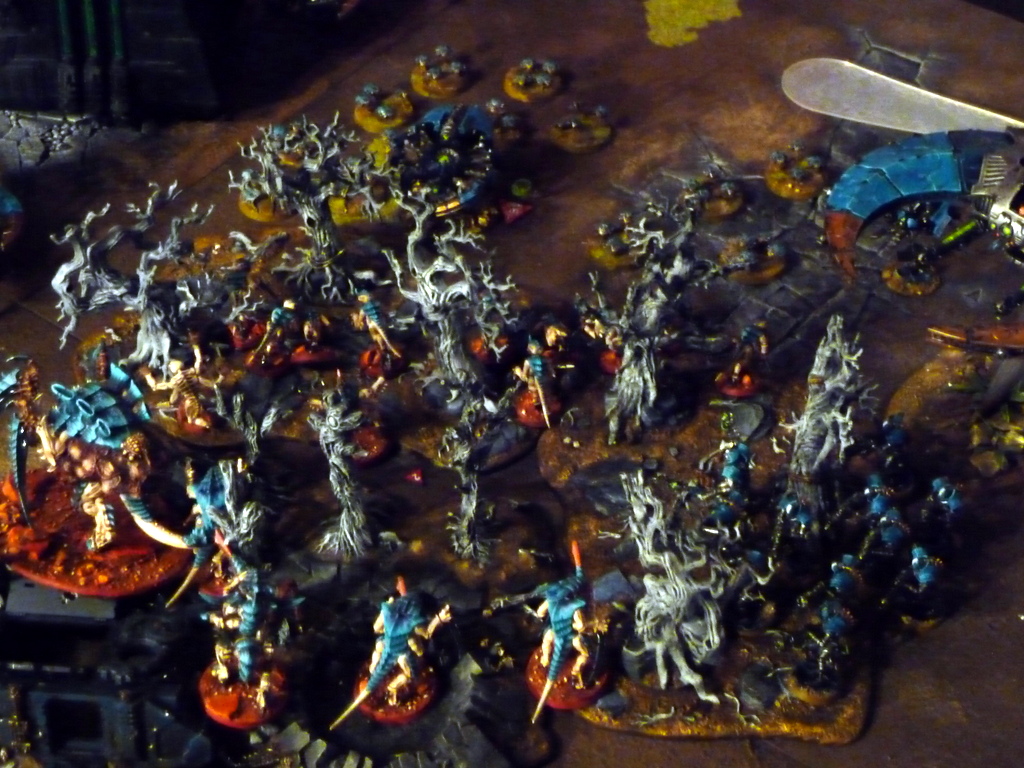 The Spyder and two units of Scarabs assaulted the remaining Hormagaunts and despite taking a couple of scarab bases First Blood finally went to Ben with their demise. 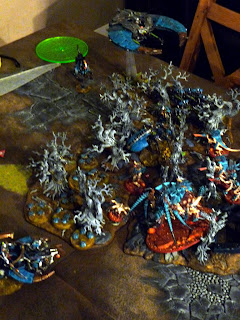 In my turn two the warriors move to take on the Immortals, Termagants shifted to all shoot at them also. The Scarabs were Enfeebled by the Tervigon and the Broodlord Iron Armed up to take on the Spyder 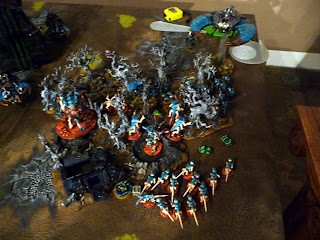 The Tervigon Prime Iron Armed and spawned eleven Termagants to replace the eleven dead. The sole survivor moved back to the objective allowing the Zoanthrope to float in search of the Command Barge. The Ymgarl Genestealers awoke from dormancy, 18 attacks, 15 [or 13] hits, only 1 rend which ended up shaking the barge only for it's living metal to shrug of the effects. The Ymgarls totally botched that one! Eight of the eleven termagants survived the overwatch fusilade to assault the warriors 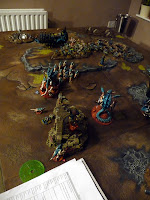 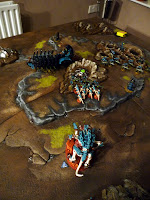 Back on the right the wounds had started to rack up on the Monstrous Creatures, 5 on the Tervigon [but Regeneration brought one back]. The remaining Genestealer was dead but the Broodlord continued to fight on. The scarabs couldn't damage the Tervigon and a war of attrition ensued keeping it locked in combat for most of the game. The Zoanthrope fired on the Command Barge, hit but failed to penetrate or was denied, either way it was spawny. The Hive Guard failed to damage too and the Trygon assaulted, failed it's Leadership and promptly put two wounds on itself, thankfully it manage to hold itself back from being sucked into the pocket universe of a Tesseract Labyrinth 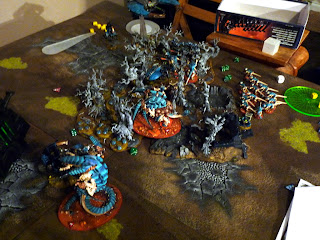 The Warriors got to the Immortals, the Prime challenged the Cryptek who fled to the back of his unit. The Prime vented it's anger on the Warriors once again hitting with unerring accuracy only for it's deadly blade to fail to wound anyone! However the Warriors more than made up for his impotence and the unit broke and were cut down. 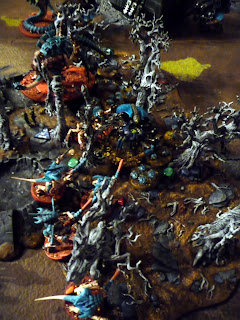 At this stage things sped up which is why we lack some intervening pics. The Tervigon Prime was killed by the Necron Overlord in combat [Slay the Warlord], but not before spawning another 11 Termagants to replace the single one that had been picked off. The Trygon too had bit the dust [Big Gun VP]. The Broodlord had finished the Spyder off and went and took out an Annihilation Barge giving me 2 VPs   for heavy Support kills. The Spore pod came in perfectly back field [linebreaker] and shot up the Immortals taking 3 but denying them the objective. So I was 9VPs to Ben's 3VP's 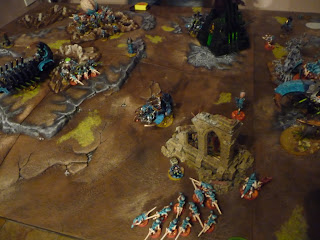 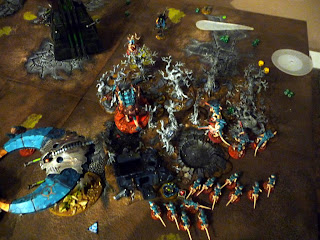 The Termagants headed to bolster their bretheren, the Warriors taking their place in the still unexploded objective. the Tervigon finished off the scarabs and had regenerated to just 2 wounds. The Broodlord moved to intercept the other Annihilation Barge.  While the Command Barge overran the Termagants. The Night Scythe left the board and the Immortals killed the Devgaunts and Mycetic Spore. I think at this stage I had realised I'd let victory slip from my fingers once again thanks to the tenacity of my foe. 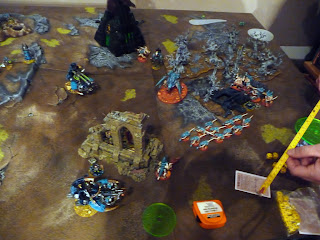 It was midnight and I wanted to call it at this point as I didn't think I could win, but we carried on with the Annihilation Barge taking responsibility for the Command Barge objective and the Warriors in the centres VP's were 12 to Ben and 5 to me. My only chance lay in the Tervigon assaulting the Annihilation Barge on the bottom most objective. It would gain me 4 VPs, and lose Ben 3 securing a draw. It was within 5" and had to go through cover, 3D6 - 1, 4, and 6. Taking the lowest numbers 1 and 4 = 5 yes!


BUT if you remember way back at the start of the game we discovered this objective was a Grav Wave Generator, meaning units charging the controlling unit halve their charge range. So I fell short by two inches and the game was lost at 12:30am. Part of me wished we hadn't gone on but equally the drama on the last dice rolls was perhaps worth it. So close and once again so far.