With the Dark Angels on hiaitus I decided to continue with my BloodBowl Skaven. There's a pic at the end where I was last at. the all had albino fur and pink skin. The armour was just Devlan Mud/Agrax Earthshade washed Red Oxide primer but it would eventually be orange. 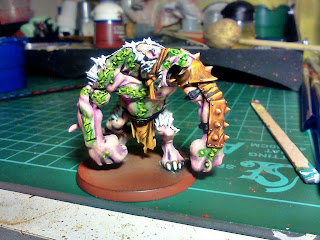 I realy wanted to try out the orange armour plates so thought the Rat Ogre would be the best test model. One disappointment is my pot of Maccarius Solar Orange doesn't have quite the opacity as my Mechrite Red, however it being patchy in places gave the armour a weathered look I was quite happy with despite my intentions otherwise. In particular you can see the shoulder guard is quite mottled, although I have added a further orange highlight and Bonewhite in places. 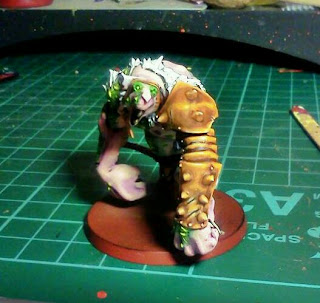 Also some further experimenting with object source lighting with the obvious eerie warpstone glow leaking from the Rat Ogres stitches. 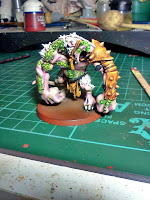 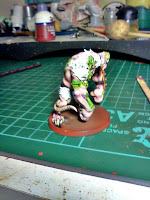 There are some palces it doesn't work, where I've been a bit heavy handed with the thinned Dark Angels green glow. In particular the top of the scars on the back ends up more green tattoo than ethereal light, but it'll do. The big win was with the applicaiton of some purple to the skin colour. the slightly bruised look really brings out the acid green colour and the choice to go Bonewhite  on the claws is quite subtle as well. 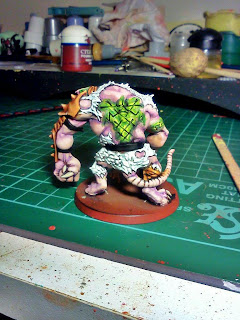 I'm pleased so far, although he only needs his black straps, base and number to be painted on but if I can replicate this on the remaining rats I'll be well chuffed. 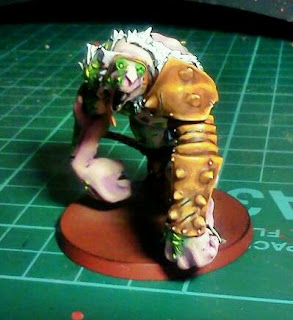 Here's where they all were 16 rats to go! 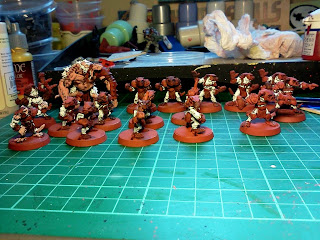 And my 2nd Edition Endzone