Some may recall earlier this year I returned to the Floral Hall Rock Nights these events used to take place quite regularly in the 90s but since the Floral has gone a bit more up-market they're slightly less inclined to allow a bunch of rockers back on the premises particularly when you know what the old Florals used to be like. Anyway, given the majority of rockers interested are the sort whose long hair has since made way for male pattern baldness and head banging has been denied thanks to a bad back and arthritic neck they let us crusties back in and the other weekend was the second Floral of the year. Sadly I didn't go but my mate Liam did, he of the scratch built Warhound and Warlord fame and to make up for not catching up we arranged a match up instead.

Now he's awfully apologetic that his army isn't painted but I was insistent he try out his new Chaos Space Marines even though most are still bare plastic. Therefore I could also try out something less than ideal and use my Hive Tyrant as the Winged variety and for the first time see what flyers are like. For some reason though I did switch off a part of my brain that was mentally taking notes so some details of the battle may be less than comprehensive but it was a fun match. Big Guns Never Tire [3 objectives], Dawn of War deployment I had 1 objective behind the building at the feet of the Troop Tervigon, Liam had an objective behind his Aegis Defence Line [ADL] next to his Quad Gun and one on the top floor of his building.

Not too sure on his army list but he had Kharn the Betrayer, two Defilers [the Brass Scorpion jobbies], two or three units of plague marines a big Chaos Cultist blob with a Chaos Lord/champion the ADL and Quad Gun and a Helldrake.


I had two Tervigons [HQ Tervigon with Warlord Trait +D6 on Run], Trygon, Winged Hive Tyrant with 2 Twin Link Devourers with Brain Leech Worms, 2 Hive Guard, Doom in Spore Pod, 4 Warriors [3 with Deathspitters, 1 with Barbed Strangler], min Genestealer brood with Broodlord and Adrenal Glands and 1 Devgaunts. This was our setup and Liam got first turn. 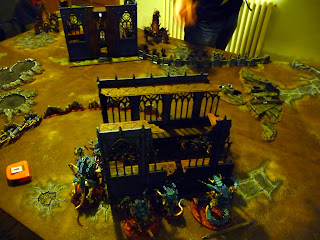 Liam let rip with the Defilers. 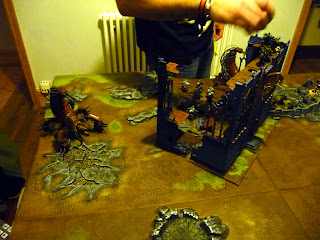 And blasted the entire Warrior unit off the board [they were out in the open in front of the Tervigon HQ], First Blood to Liam. He also picked off one of the Devgaunts and may have put a wound on a Tervigon and perhaps the Trygon too. 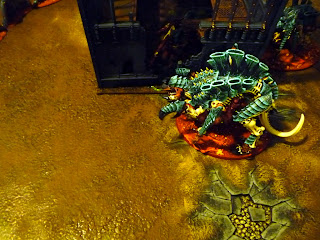 The Troop Tervigon spawned 9 and pooped out, I elected to save the HQ Tervigon so I could spawn them into the building with the objective - 6" spawn range and 6" move is really helpful with a 3 storey building! The Tyrant went +3 Iron Arm and Swooped over the building and shot at the defiler putting two glancing wounds on it. 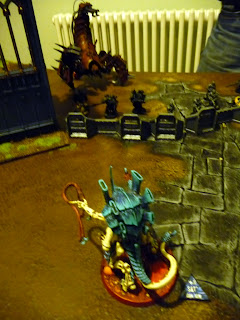 Endured Genestealers ran for the crashed Aquila wreckage but couldn't make the cover. The Trygon was his usual lazy self and got snagged on a piece of architecture. Hive Guard shot at the Plague Marines in the building but didn't do much, maybe killing one at the most. 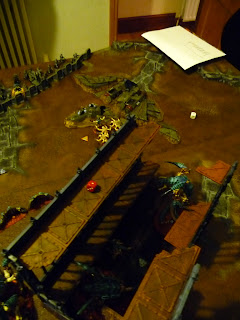 Here comes the Heldrake! Swooping in and putting 1 wound on the Hive Guard and killing a few gaunts and perhaps wounding a Tervigon. 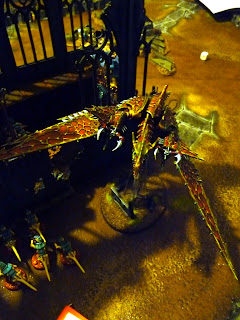 The Hive Tyrant suffers two wounds thanks to combined fire, he may have crashed at this point from being hit but wasn't wounded. 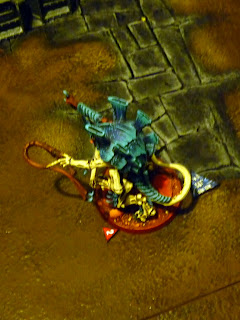 My turn two and the Doom arrives, bang on target and manages to shrug off interceptor fire from the Quad Gun [phew] and sucks the life from three cultists making him strength 7. He winds up Cataclysm on the Defiler but it somehow denies the warp energies brought against it. The Genestealers, who'd been previously mullered by the Cultists managed to get in and assault the Quad Gun, no more Interceptor fire from you! 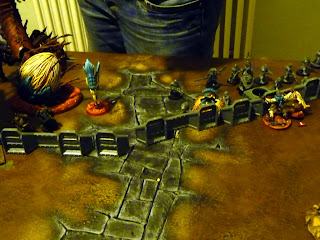 Everything else barrelled forwards, the Hive Tyrant Vector Struck the Plague Marines in the building but failed to damage. He then fired at the Defiler but it shrugged off the hits. 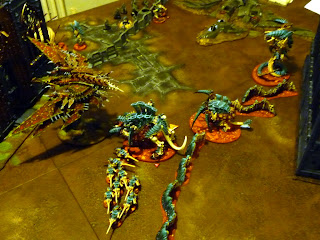 Liam's turn and the Heldrake flew back over the Tervigons doing some damage and then flaming the Devgaunts down to two. 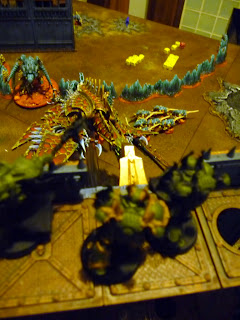 Kharn, his crew and the Defiler multi-assaulted the Doom and Spore pod but not before losing another of their number to the Doom's leeching ability. The Doom was on 5 wounds by the end of assault due to trading damage. Kharn also killed two of his own squad with wild swings. My next turn and the Stealers moved over the ADL and assaulted the Cultists. Not thinking about positioning the Broodlord was overwatched for his final wound and Look Out Sir failed to save his a$$ the Doom eventually met his end and Kharn consolidated over the ADL. 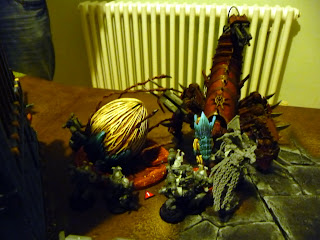 I'm not entirely sure of that 1 and 3 is significant to what was going on at this point, perhaps it was the charge range to the Trygon - not enough. Meanwhile my two remaining Devgaunts had shot at the Heldrake, 1 hit, 1 glance! 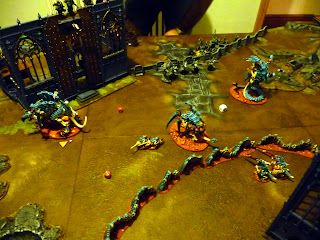 My Hive Tyrant was gunning for the second Defiler but still no more
than 1 glance. The following turn he managed to get two hits with his autocannons and I failed both saving throws! Quite a spectacular loss as the Winged Tyrant slammed out of the sky! 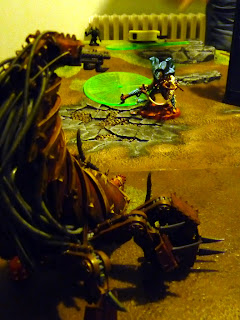 Having taken 5 wounds the HQ Tervigon spawned 11 gaunts into the building who assaulted the Plague Marines and pulled them off the objective. 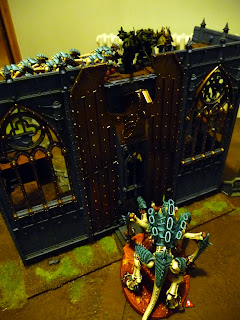 The Troop Tervigon got just enough on the dice to assault the cultists through cover but was slaughtered by the Chaos Champion whose Black Mace required a Toughness test, anything but a 6... oh!* 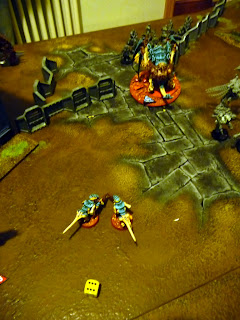 The Heldrake returned to my backfield and killed three more gaunts, but I was just about holding my objective. 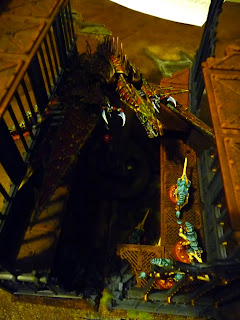 The Hive Guard was assaulted by Kharn and his boys, he wasn't going to survive... 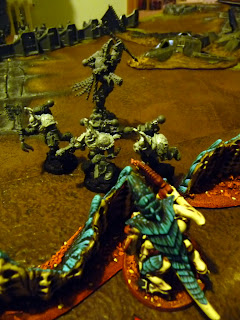 The HQ Tervigon spawned some more gaunts into the building. The objective was completely contested now and Liam was winning by 2VP for Linebreaker and killing my Trygon. 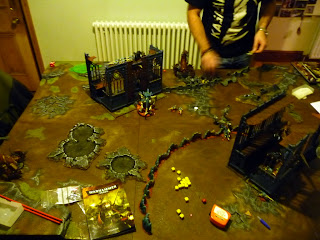 So I gambled with the HQ Tervigon, hoping I could assault the cultist blob, pull it off the objective and hopefully snatch the game. Unfortunately the Defiler [being a scoring unit] doubled up on the objective but my charge roll was just sufficient. 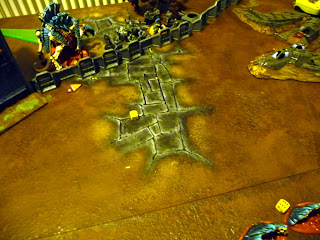 The Tervigon took 4 wounds and the 6&4 passed but the other two went onto Feel no Pain and as you can see the top two dice came out in my favour. Throughout the entire game I'd been 'lucky' with FnP making many crucial saves when Liam had failed to make use of any of his FnP rolls. Without making this save I'd have lost the Tervigon altogether. 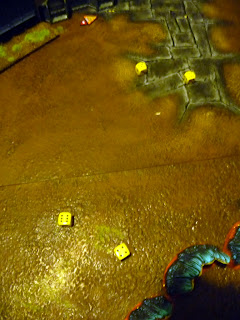 So we rolled for turn 6 and it didn't come, we both had Linebreaker, 1 Objective each but Liam had killed my Trygon and secured First Blood so he won 6-4. It was a really fun game, I certainly enjoyed playing Chaos more than his Dark Eldar. The Dark Eldar should be weaker but with mostly Grotesques and skimmers which you can't shoot unless you're 6" closer than your max range most of my weapons are too short to hit and not strong enough to penetrate. His Chaos may be tougher, with better saves, FnP and even Fearless but at least I can hit them and close with them in combat. I look forward to our next game when no doubt many more figures will be painted. Hopefully he'll send some pics through as and when he finishes painting them.

* Although a Toughness test is based on equal to or less then your stat, so in the case of the Troop Tervigon of T6 it would seem that it cannot fail don't forget pg7:
AUTOMATIC PASS AND FAIL
When taking a characteristic test, a dice roll of 6 is always a failure, and a dice roll of 1 is always a success, regardless of any other modifiers. However, if the model has a characteristic of 0 or '-' it automatically fails the test.