Afternoon #WarHamFam and #WarhammerCommunity DreadTober is a long ways back now but it looks like I forgot to share the white background pics of my Bloat Drone and three Space Crusade Chaos Space Marines. 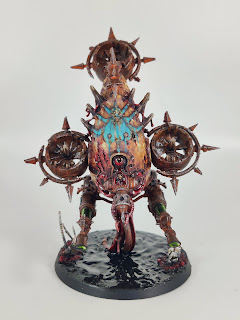 In some respects it's nice to get a second bit of the cherry on this one. It came together so quickly and the Attack Bikes overshadowed its completion somewhat. 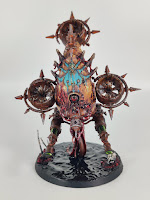 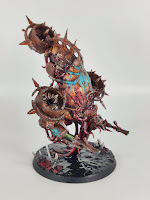 It's funny, I have no reason to have this army but I could envisage having a few of these Bloat Drones and Blight Haulers too. 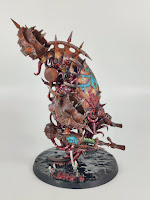 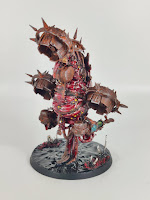 My son still has a Blight Hauler at primed stage and should he ever want to paint it I'd probably get one too so we could paint them at the same time. 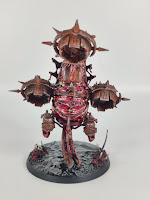 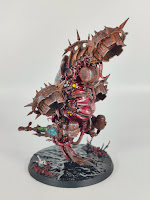 The plan was to do that with all these guys but Armies On Parade meant I couldn't wait around on that schedule. 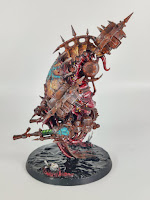 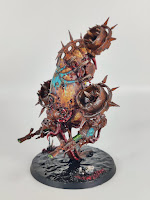 As mentioned these were just a bonus. Sat around for years they had no real purpose and I wanted to see if my Death Guard scheme would still work on something not overtly Nurgle but basic Chaos.

I think it did, although their stature could have been enhanced by some tactical rocks perhaps.

Although that would have been a bit difficult while still trying to have the tar-swamp bases.

I did enjoy putting the Nurgle Blood Bowl team decals on those shoulder pads.

Just about visible under the muck and grime I really love that touch. I've got another Plague Marine from the Space Marine Heroes set to paint up and he has a space on a shoulder pad for a decal, where usually a horn is erupting on these models.

Lastly, this was a test to see what the Poxwalkers looked like bursting from their plague containers before AoP.

I had such a blast with these I've still got the Gellerpox Infected to do at some point when I feel that infected open wound start to itch again. What I'll ultimately do with them I've no idea but they've been a great project this #NewYearNewArmy
Posted by 40kaddict at 12:20