Afternoon #WarHamFam and #WarhammerCommunity it's the first of DreadTober and I've been painting my Bloat Drone. With so few days left until Armies on Parade, naturally I took a few evenings off which feels like such a mistake. But, I took my son back to university and when I did get chance to paint again I made significant progress as you can see. 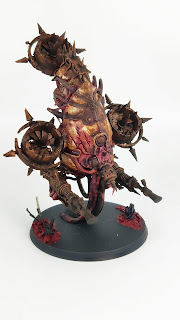 I'd actually painted the Vallejo Game Effect Dry Rust prior to the session in particular but then it was Colvin & Co Burnt Umber Artists' Acrylic for all the panels and Army Painter Red and Purple Tone washes over the top and all the fleshy bits.

It's added so much to it and although I would like some other tones, particularly on the paler areas I love the mottled effect so far and I'm happy to leave it mostly as it is. It's come together almost instantly, but I think it's deceptive as there is still a lot to do, it's just nothing will be quite as transformative.

OK, while I was at it I had these 3 old skool Space Crusade Chaos Space Marines that I had started with my other Death Guard but did not expect to finish them. 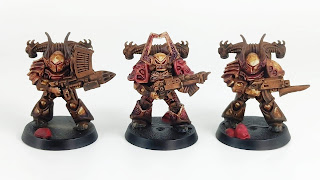 But I need something to do while I'm waiting for the Bloat Drone to dry. The sensible thing would be Munitorum Containers or Attack Bikes, but carrying on with more Death Guard means I'm using the same paints. They'll still be useful in my AoP display and it's very efficient to do it this way, so I'm not doing anything silly by throwing paint on them. 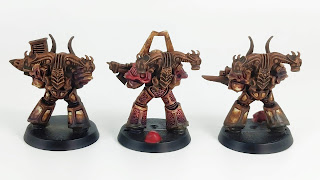 Scale-wise they're a little stunty, but I would suggest that's because the current Death Guard have been upscaled. They're still as tall thanks to their horned helmets but realistically they're just a bit shorter. They'll make some nice background fillers any way.

So, I'm getting it done, very quickly considering DreadTober is supposed to be the whole month but I've other schedules to meet so I can't complain if I deliver early.
Posted by 40kaddict at 16:04