Afternoon #WarHamFam and #WarhammerCommunity it's the second of DreadTober and I've been painting my Bloat Drone. I know this doesn't look too great that less than two weeks in I've completed my pledge but I'm pressured with so few days left until Armies on Parade. It'll be 8 days left today and I'll probably have one evening gaming so only 7 more days to do my Ravenwing Attack Bikes and tweak the Munitorum Containers. 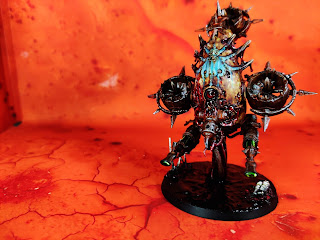 The Containers could be considered part of the pledge alongside the attack bikes but still so much to do. Back to the Bloat Drone and it naturally progressed really quickly. I had a choice to make with the fly icon on the front - rust or Blessed Verdigris and I think I made the right choice with the verdigris. 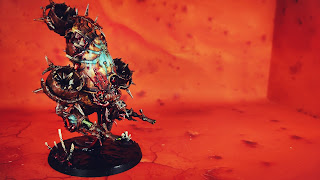 I really think the turquoise works in this instance. I'd originally wanted to keep that just for my Dark Angels but in the end it adds a little more history and variety to the colour palette. It also helped with fly icon on the gun barrels too. 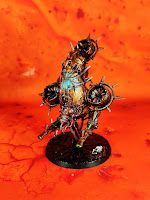 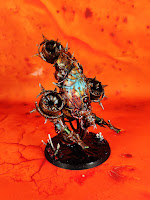 If I had more Bloat Drones I would consider a paler bladder/body material similar to the Poxwalkers. Although the angry red flesh is what I intended it doesn't feel it has enough depth or variety. I'd have liked a little more underpainting so we would get the illusion of what's going on under the skin. The red is just a little too opaque overall. 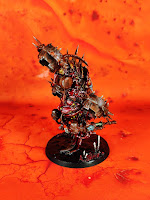 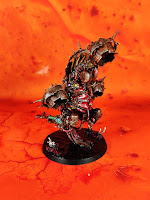 But really pleased with the results overall. 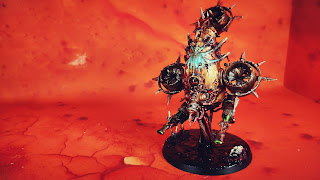 Although the eye lens might have been better in orange, the Tamiya Clear Red X-27 red is obviously used on the flesh immediately below. 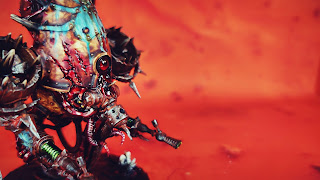 I think it adds a layer of confusion about what material the lens actually is. It's a minor annoyance as I really like the lens, it's just confusing to me. 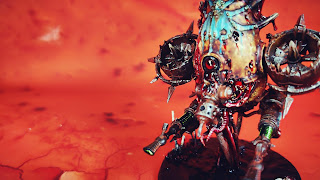 And as revealed in the previous post I also finished these old skool Space Crusade Chaos Space Marines. 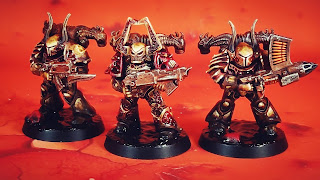 Although not 'dread' sized I just needed some more bodies for my Parade and these marines have been sat unpainted for 30+ years.

There's a surprising amount of red in there, almost Khornate on the middle one but I wanted all that panel detail to look like raw exposed flesh, like an open sore.

I;ve also been playing around with my camera apps as I took TO DONE! pics of my Poxwalkers and Camera360 made them so stylised they're almost unrecognisable from the actual models. I'll probably take the pics again. 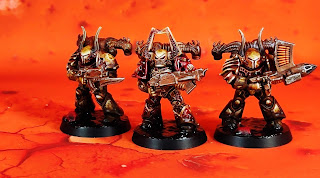 But Camera360's Velvia filter really gets the high contrast saturated look of my red shots. I've found another app called Ektacam that will also replicate the Fuji Velvia filmstock, but it doesn't smooth out the detail as Camera360 does. Unfortunately it's an old app, not built for the current Android OS and has some incompatibility issues. Any time I try and change the camera ratio it stretches or squishes the image into the new dimensions rather than crops it. It's an annoyance but the results are more consistent for these shots. 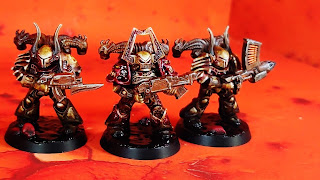 So, two more GREAT Big RUSTY Stamp of Approval for the 2022/23 Hobby Season. 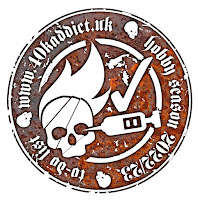