Afternoon #WarHamFam and #WarhammerCommunity it's now the third of DreadTober and with my Bloat Drone TO DONE! I'm back to my Ravenwing. 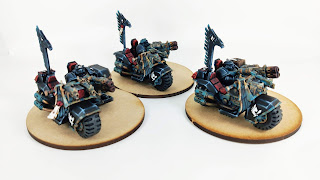 You should all be well aware I've found this project overwhelming - too much at once which made it much easier to jump to other projects and put this repeatedly on hold.

However, Armies on Parade and Dreadtober have given me additional motivation to push on through. As much as I think you should 'go with the flow' and paint what ever is your muse at that moment in time there are situations where you have to wade through the projects that you just can't get going on.

So, I focused on the Attack Bikes, the Primaris Chaplain on a bike and after some more highlights just one additional bike. That sounds odd but it made sense at the time because I'd done the first set of black highlights on it so it wasn't too hard to do the rest.

The remaining 3 Black Knights and 2 bikers have a bit more work to do and so something had to give as I just didn't think I had enough time until AoP. After all the black highlights I decided to glue the sidecar on, which I soon regretted as I'd forgotten I hadn't freehanded the company number 2 on the right shoulder pad - that will be a ball ache to do now they're in-situ.

The 3 Attack Bike riders and the extra biker. Now the highlights appear extremely pronounced at this stage and ordinarily there is an additional black shading that goes on to help blend the highlights, but I didn't bother in the end...

In some areas it's painfully obvious that the transitions are stepped rather than smooth but when the rider is on and with the litanies inscribed on some of the panels it acts to blur some of the lines anyway. 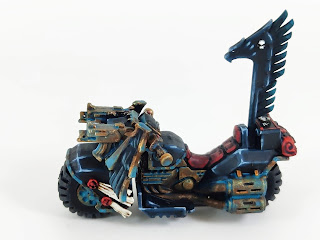 Your eye can't easily parse the tones so it just smooths it all out. I may kick myself for not taking more time over it but I've lived this process and made decisions that I am comfortable with so I'm not going to beat myself up about the - #FinishedNotPerfect 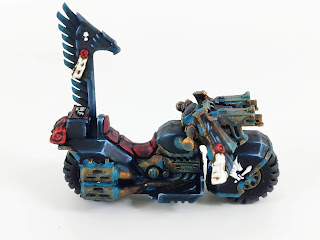 Although I don't have Primaris in my Dark Angel force, this guy is an exception [alongside the Redemptor Dreadnought]. He's an awesome model and as a HQ I can totally accept he is significantly larger than the rest of his brothers and bikers. 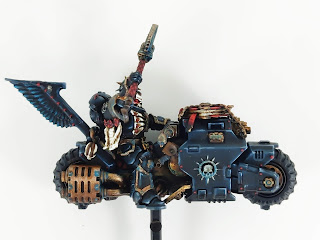 I'm surprised how well he's come together actually. He may also work with my Guardians of the Covenant Primaris army, should I ever get round to them so I think the Ravenwing decal from the Indomitus sheet will still be valid. 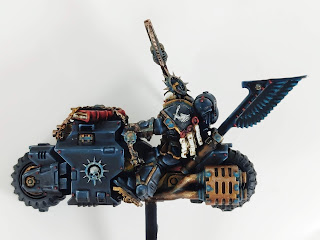 Next update I need to do the bases for my attack bikes, all the eye lenses, glows for the headlights, rivets on all the bikes [not just the Chaplian], purity seals, litanies, vid screens and those darn freehand company numbers. AoP is this Saturday for me, these are actually completed now so I'm on to Munitorum Containers and catching up with Rings of Power. When it's done I'll have to do my online entry photo shoot and then maybe get the 5 remaining Ravenwing bikes finished. I must admit it feels really annoying to have to go back to a point that if I'd been able to batch as one larger group would be well behind me. But, I might have been overwhelmed again. So, better to have progressed with more to do than started and fallen and the challenge.
Posted by 40kaddict at 12:43