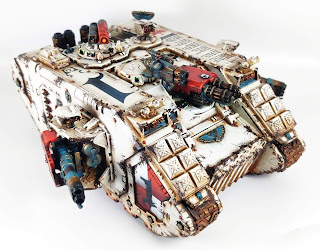 A different prospect altogether when it's not on the red background. All those subtleties in colour just jump out. 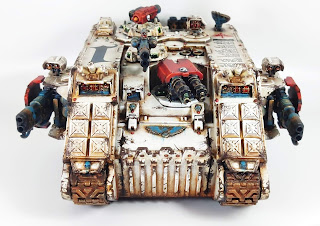 The heat bloom on the Flamestorm Cannon isn't great, or perhaps the blessed verdigris is bit clumsy but I'm happy with  most of my other choices. 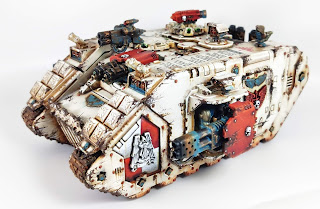 The weatherign powder in particular adds just enough variety at the the bottom of the tank.

It may not come with a Red Planet BASE! but that dusting of rust orange gives the illusion of it. 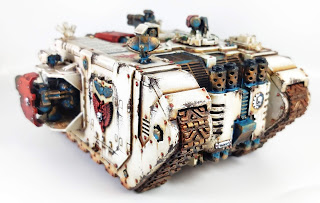 I carry on with this I'll end up wanting to revisit all my models and give them dirty greaves... 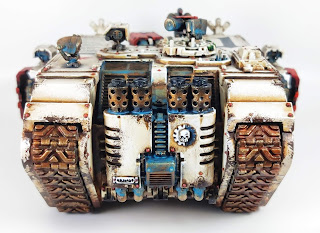 Green doors may well have added a little more variety on the model and yet more continuity with the rest of the army but I will live with my choices. 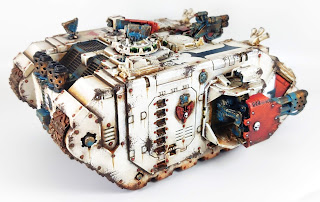 Alongside the fact the gunshields are back-to-front. I did also consider the Indomitus decal sheet has a white checkerboard strip that I thought would be cool on the shields, if I could source a second one but thought it might be too fussy, 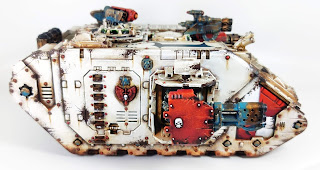 The Hunter Killer Missile appear all wobbly looking now. I was sure I'd glued it much straighter than that. It got a bit of a bang at some point which led me to believe that was the result, but it still feels pretty solid so I don't know why it's off-kilter. 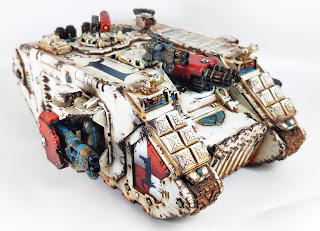 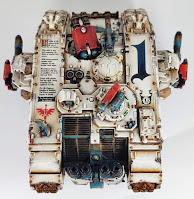 The lenses still look OK. I didn't Tamiya Clear them in the end. The drop of Vernidas varnish to add a proper lense feel works but I think it works better with the Tamiya Clear process. 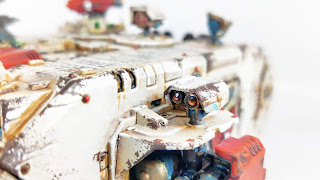 I had to retain all that highlighting though, it would have been lost otherwise. 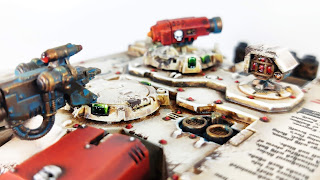 The green lenses look OK too, they aren't as well executed as the original red ones but the Tamiya Clear Green X-25 makes them look a little more realistic than the un-Clear orange and red. 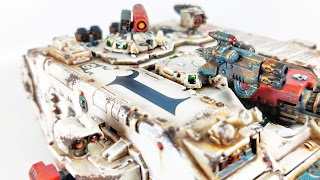 I may well add some purity seals on these front wings as when the Land Raider earns the right to bear them. 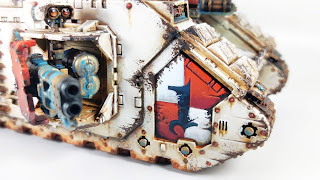 A quick splash of Army Painter Soft Tone on the Mechanicum banner decal toned down the white enough to help it belend in. 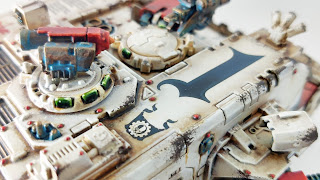 Again, Camera360 isn't necessarily giving me the quality of imagers I hoped for, so I tried some with my native camera app. 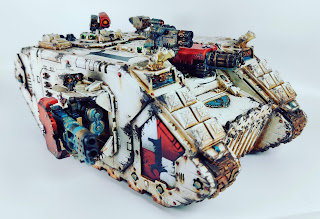 I don't know if that improves anything for you as the viewer. 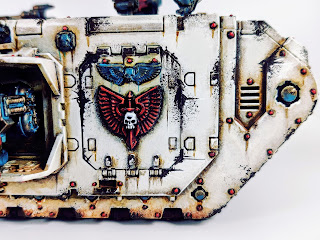 I think the depth of field doesn't help, the phone does have a dedicated macro camera but most everyone said zooming in with the main camera gives better results. 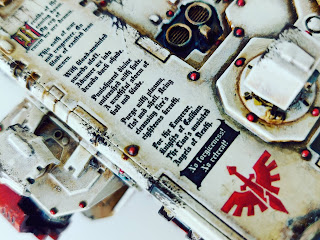 There we have it. Back to Greenwing and Ravenwing next.
Posted by 40kaddict at 12:06