Following on from my last #bloodbowl post I decided to take tackle the team badge, I mean it's a challenge - the straight swords would have been easier than the cutlasses but I can be a little masochistic sometimes.

So, here's how I did it. I started with one banana shape, from the centre of the diamond to just above it's top-most corner. 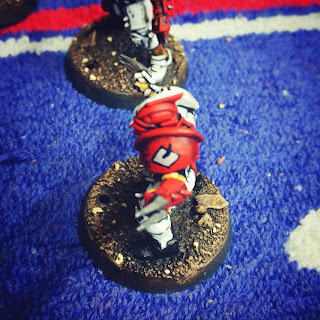 I then mirrored it on the other side. 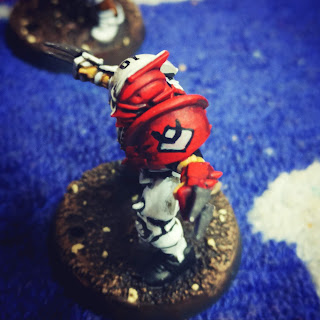 A couple of extensions on either side to lead up to the sword guards and hilt. 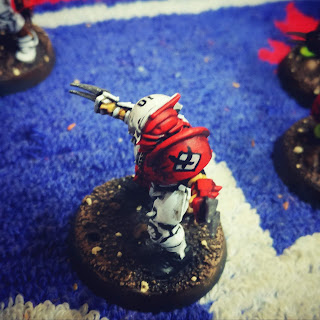 And them little circular swoops for the guards themselves. Not too pretty but OK. 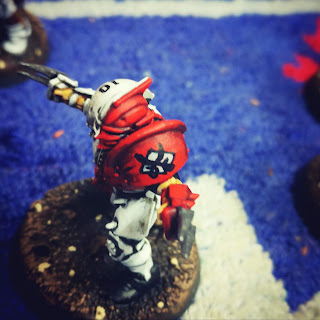 I managed to get better as I went along though. Some of the smaller badges are a bit clunky but not too bad. 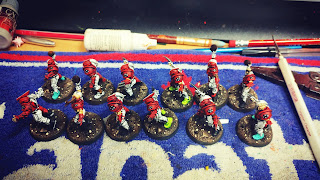 I then painted Tau-Sept Ochre [still going strong] in the sword blades themselves. 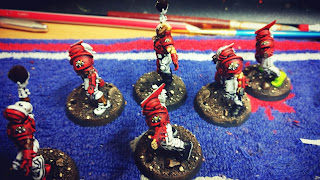 There was a bit of bleed over the outlines, I tried tidying it up afterwards but I'm not going to lose any sleep over perfection. 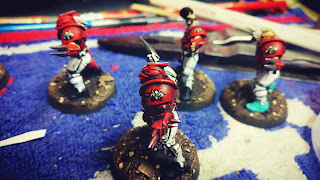 I added a yellow highlight inside each blade and then tried to add Bahama blue for the sword guard. The blue was a much greater challenge, there really wasn't enough space within the black and my ability to paint tiny details was not up to the challenge. 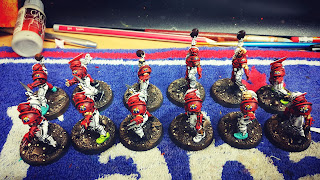 Instead I ended up with some blue blobs, which at least from a distance manages to achieve the same effect. 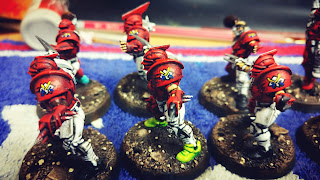 So I can live with it. I have thought adding a yellow fill to the number decals might help them stand out and tie in with the badge a bit. There's sufficient space for my level of skill to achieve what I'm hoping for, it won't be like the blue at least ;) 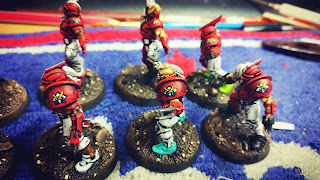 While I was at it I managed to paint the eyeballs on my 3 helmet-less players. I had some white from picking out highlights on the badges diamond which also helped with the contrast on the symbol. Pupils to do next, lets see how they go down. 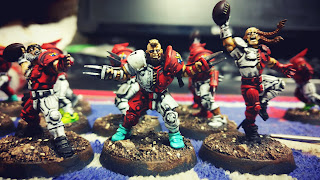 Compared to the quartering these details seem to take so long for not much return but it's quality not quantity in this case. Unlike my last post of the painting the diamonds which felt like there wasn't even quality for all the effort involved, this one feels like a step further on. So I've the numbers to address, all the black elements need highlighting and various other little bits but they're so close to being done now, which is handy as I have another project that has suddenly caught my attention...
Posted by 40kaddict at 12:22