Got a message from Ben the other day to arrange a game, he's had a renovation and house move recently so gaming has been low priority. He'd got Otty and Liam on board and the plan had been Blood Bowl but Liam brought along #BlackstoneFortress which I've been itching to try since I realised it could [up to] 5 players at once. Low model count with RPG elements we can play together, it seems like the perfect solution and antidote to the high model count and convoluted mechanics 40k has seemed to become within our group.

Anyway, we drew our cards randomly and I got Espern Locarno - the Navigator. I also drew some pre-game event card where I discovered a booby-trapped 'chest'. To defuse the bomb I had to roll 5D6, score a 1, 2, 3, 4, and 5 and stack them in that order on top of each other, without toppling over within 20 seconds. Now I could delegate the challenge to someone else but as we didn't know what we were getting into I did a test roll, though it was a doddle and went for it. First roll got me everything but the 5 and then I rolled and rolled and rolled that one dice until the timer ran out and got 2 damage worth of shrapnel in my face. Half my wounds gone before the game begins! To add insult to injury, Otty, who had had a practice beforehand immediately picked up the lone dice and rolled a 5! He then did the challenge himself in under 10 seconds. Anyway, this was my player card at the beginning, with another element of note I'll mention later but you might pick up on if you've played the game. 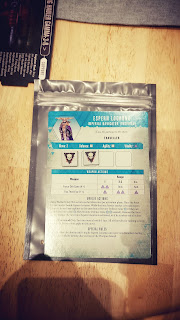 This was our entry into the Blackstone Fortress. It's also worth noting no figures had been painted by Liam. It's worth noting because we never play with unpainted figures and that fact was repeatedly noted by us to Liam at every opportunity - and that's why we play folks - the ritual humiliation of our friends for $hit$ and giggles! 😂 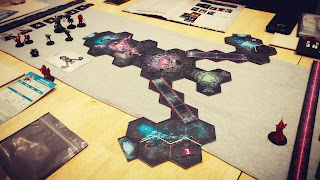 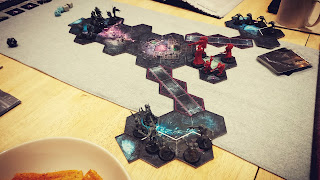 I went first, moved to the side and think managed to heal a wound. Otty advanced and shot half the cultists to death - he was utterly brutal and efficient in his capabilities. What had seemed overwhelming at first suddenly looked achievable. 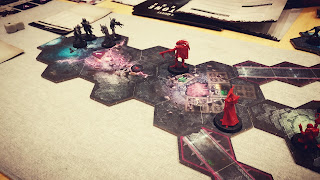 The Ratling Twins managed to get some more kills and then Janus Draik took a number of activaiton dice to sprint across the board and just scythe through all but one of the cultists. Everything was looking easy... too easy and it was then that I realised we were all playing our characters in their 'inspired' profiles 😞 There wasn't much we could do at this stage and I suggested we just played it like a temporal warp anomaly had boosted our prowess. We would play as uninspired the next turn and return to inspired, for those that had achieved it [everyone except me because they had all been killing machines]. 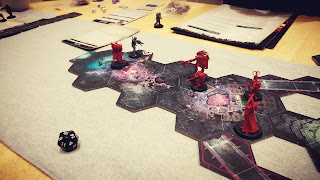 In the mean time the Ur-Ghuls managed to reach the Ratlings and do some damage, the other Cultists skulked behind their barricades. 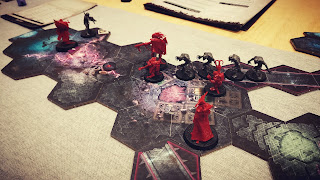 A turn later and we'd killed the xenos filth, the last of the cultists holding one of the objectives and searched both of the objectives. My adventuring colleagues had discovered some serious loot [mainly archaeotec wepons]. The remaining cultists finally started to investigate the noise of fighting in the fortress so we arrayed ourselves to receive their charge. 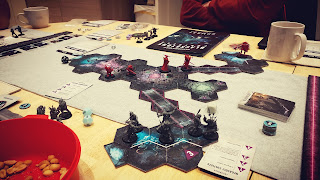 And then swamped them. With the last three cultists cut down we were free to remove all the artefacts on board and although I didn't kill enough to become 'inspired' I came away with an arteffact to trade with my colleagues. 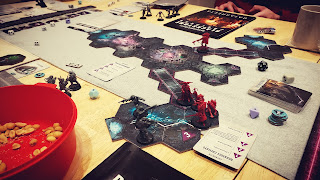 Back on board our transport vessels I soon discovered Liam had found the secret co-ordinates required of my personal mission. By trading my artefact with him I would start the next game automatically inspired so everything was looking rosy and we were all back-slapping each other that our first game had gone so well.

OK so we'd been inspired when we shouldn't have been and so the capricious chaos G.O.D.s intervened to temper our hubris and it transpired such success did not go unnoticed - Chaos Lord Obsidious Mallex himself would be joining his throng to prevent further incursions from our intrepid band of heroes.

With hindsight only fair, we were over-powered from the get go, no we will be challenged appropriately. Hopefully my inspired nature will help mitigate his impact.

Anyway, we thought the game was great, suggested we play it once a month [although Blod Bowl is also an option]. We each took our hero and a unit of baddies and promised to paint them ahead of the next game. I got the Chaos Beastmen, so expect updates as I go off piste of my To Do List...
Posted by 40kaddict at 12:13