Otty gave me a call the other day asking to play Blood Bowl. He's found a local league and has joined up, built a Goblin team from his extensive collection of random figures and need to familiarise himself with the rules. Despite my Middenheim Marauders being WiP I thought I'd take them along regardless. So here's some good old ES Posthumous to start the ball rolling. 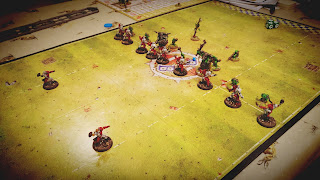 But was over-confident with the ball bouncing off  my endzone into the crowd. 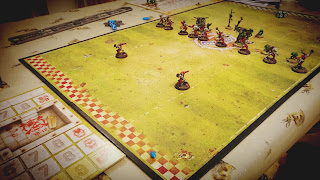 My Thrower [Saul Tigh] recouped the ball and I sent one of my Throwers dancing down the line, while the rest of the team tried to systematically put down as many gobbos as I could. A troll even got floored, I came out of this turn really well. 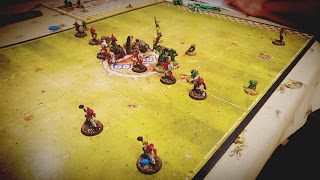 On top of the trolls Otty also has a Goblin on a Pogo Stick [that looks awesome], a chainsaw wielding fanatic and a ball and chain loony. I think this was the loony's abject failure to pummel my Lineman and summed up much of Otty's game. Although I certainly found the crazy mix of characters, with the trolls to be a considerable challenge. 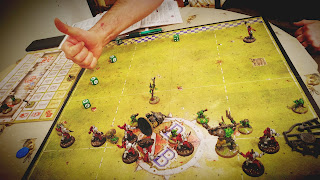 With the turnover I tried a number of things but ultimately my pass at full range was incomplete, I'm more used to playing Elves with their advantages so I was a big ask and the ball scattered at the Catcher's feet. 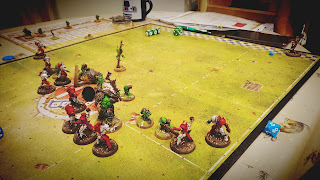 When the Pogo Stick failed to pick up the ball and it scattered it was a simple task for my Catcher to poach a touchdown. 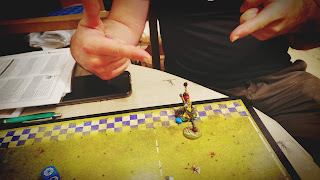 I think I also did some damage in his team, pushing a couple of gobbos into the crowd. 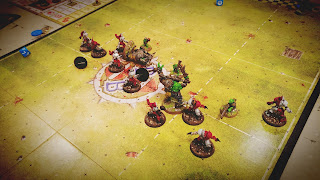 Next kick-off and the pogoer managed to snatch the ball up while the trolls and secret weapons managed to KO/wound some of my players in return for my first round of injuries to his team. 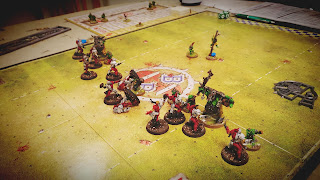 I managed to make a break for the pogoer, but only pushed him back. The ball and chain was swirling around doing significant damage one turn and then avoiding every opposing player the next, it was fantastically random and funny to se.. 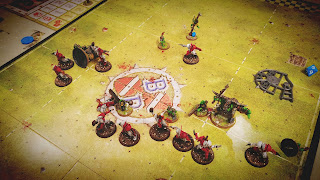 Bouncing out of my grasp the pogoer went deeper into Otty's backfield... 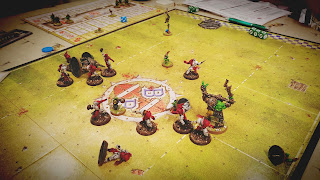 ...and then somehow managed to make it all the way here - that's what happens when you forget to take pictures and as it;s over a week since I can't remember what happened between pics or what happened next as I don't think it made the touchdown - I think I blitzed it and it was KO'd and there really wasn't enough turns left for me to get it upfield before the end of the first half. Not to mention it was after midnight! 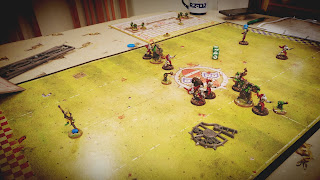 Anyway, it was  good laugh, again hard to play because of the unfamiliarity of the rules. There's definitely something about Blood Bowl that feels more like chess in a way. Making the 'cage' is a key skill and maximising how tackle zones work. With more time I'd appreciate the nuance a little more and help improve my game. It certainly feels like a more balanced game than 40k, obviously there's random dice rolling and players stats gift advantages and disadvantages but for a Goblin team they had some really powerful characters compared to my average Joes. I don't know whether we'll be playing more games but it was a welcome change, I only regret not getting a close-up of Otty's teams as for only a couple of days work and scrounged models they looked great, maybe next time.