My Human Blood Bowl is currently my muse at the moment but I'm still fatigued and beset by the garden flooding which makes getting to the mancave unpleasant. I've wellies to wade through it all but sometimes I just can't be fussed. Anyway all of the players have had their Stonewall Grey first highlight done. Not sure if the Khorne Red had been applied universally, there are the Catcher and Lineman on the right that had theirs and Bloody Red and white highlights done to completion. 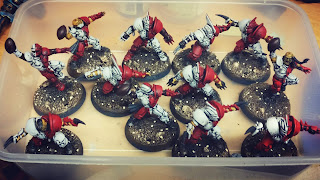 However, these pics are white highlights complete and also all of the Khorne Red. Bloody Red is next, although I still think it's possibly a step too far. Then it's all the skin tones and any little elements, like spike metallics, ribbons and fancy day-glo running shoes. 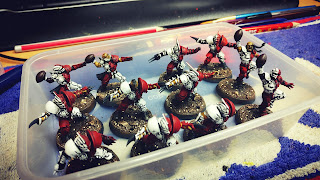 I tried to stipple a bit to try and get texture into the shoulder pads but then carried on so that ll the top most areas are completely 'over-exposed'. I mean they're still alright but I know how good these models can look and it's a little galling not to have picked out some of that great detail. 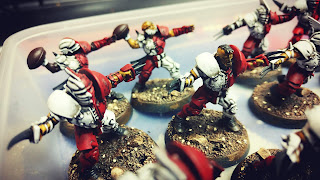 They're all a little comic-book at this stage, which isn't necessarily a bad thing but I would like to do something a little different in the future. 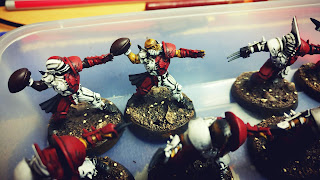 Anyway, they're getting there and I've even primed some balls too and prepped the turn trackers . I think I may pick up the Ogre player as well to join the team, it seems like something the Marauders might do to bulk out their numbers.
Posted by 40kaddict at 12:16