I had long felt that the base of my Imperial Knight Crusader - Lady Pettorini was missing something. There was a significant amount of empty space and I concluded a tattered Renegade Knight banner might break up the expanse of Red Planet BASE without adding any height [which I didn't want]. The initial plan was to get my mate Liam to paint it - he has Chaos/Renegade Knights and also a Nurgle Chaos army. I desperately wanted Lady Pettorini smashing the face off some filthy pox-ridden servant of disease -it would be poetically just. However, I eventually came to the conclusion it was something I had to do for myself. I wanted the banner itself to be a stained cream colour, so I could play around with washes to make it grimy. That meant the skull had to be black to stand out and the Nurgle symbol for my son's tumour could sit right in the middle where she could stamp right down on it. I also added the PXA acronym for the type astrocytoma [although actually it's an APXA]. Surprisingly I haven't looked too much into it - the fact we were told it was not as bad as they first thought meant we were just relieved and got him through the treatment. It's only know we're in a frame of mind where we have questions that require answers. 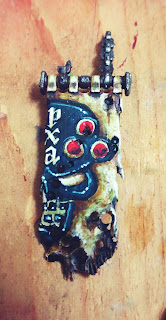 As freehands go it went OK, the skull isn't quite as defined as I'd like but it'll do. It was subsequently glued to Lady Pettorini's base, I added some back around it as it was spreading disease corruption and also some Anita's 3D Dimensional Glossy Black paint for thick black corruption bleeding fromthe cursed banner. 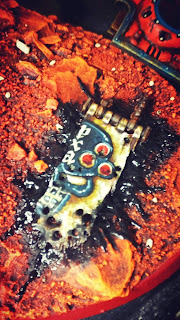 Now it's done it might be a little over-powering on the base than I'd originally intended. But a foul diseased banner, by its very natures, was always an imperfect thing so the fact the base is not perfect is inevitable. Ultimately it had to be done, it was cathartic and this post is cathartic. We are still a long way from relaxing about this situation, more than 4.5 years still to go and it's small displays of defiance like this that help me through it. 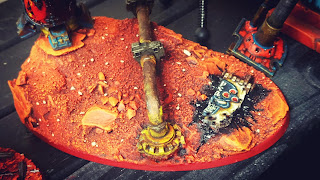 I've potentially got another hobby related protest against this filthy disease lined up, which could be different to my usual stuff. Just have to wait and see if it pans out. Anyway, this got entered in the monthly Warhammer Manchester Battle of the Brush monthly challenge for 'large models' and I should actually take it's gallery pics too at some point...
Posted by 40kaddict at 12:32