With the Dark Angel Assault Squad TO DONE! it's time to return to the Hybrids. It's really interesting how my mindset has readjusted to these. When you consider how my last efforts felt so demotivating and chore like, now I am on a mission. I continued to finish up all the metals, added the yellow dynamite sticks and there were a couple of other bits and bobs I needed to pick out. Essentially 90% of the base coating was done in preparation for Army Painter Soft and Strong shades. Bizarrely the Soft [sepia] shade had started to go a bit weird, almost milky but it went on fine mostly. There were a couple of deep recesses that almost echoed the horrors of Seraphim Sepia but the Strong Tone covered that up in a jiffy. 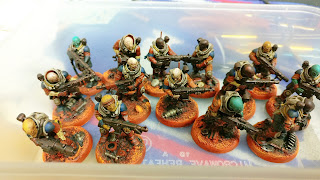 I love models when they're just washed. I wish I could leave things alone at this point but my 'hind-brain' compels me to do more. You can just make out the Mining Laser Hybrid has had the first set of Stonewall Grey highlight added to his environment suit. 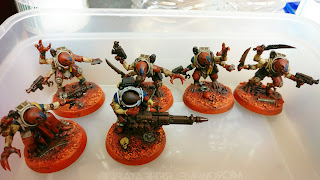 And while I was at it there's another three here that had their highlights done. Four in one evening and then I randomly threw in some highlights on a couple of the orange robes. So this has given me all kinds of things to think about: 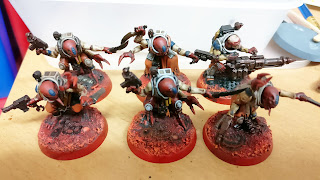 I'm really digging the orange uniformed hybrids, it's a popular look, no doubt because of how well it goes together. I'm still glad I've got half the force in red coveralls but the orange are clearly my favourite. I subsequently managed to do all other orange Acolyte hybrid's first highlight in one sitting. So let's imagine that I can do the orange clothed Neophytes and red clothed hybrids in a further three sessions, with second highlights 3-4 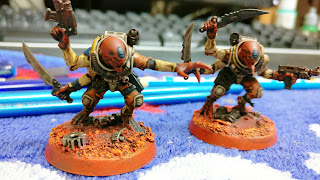 With these estimates of 14 days max to do all the clothing. Then I'll just have:
OK, so not clear yet, there are some details that need clarifying but definitely looks doable this month, let alone by the end of the season. At this rate I'll have to see what I may have to fit in after these. My head is telling me it should be the Deathwatch guys but my heart is saying Deathwing Knights...

Still, perhaps I shouldn't count my chickens just yet...